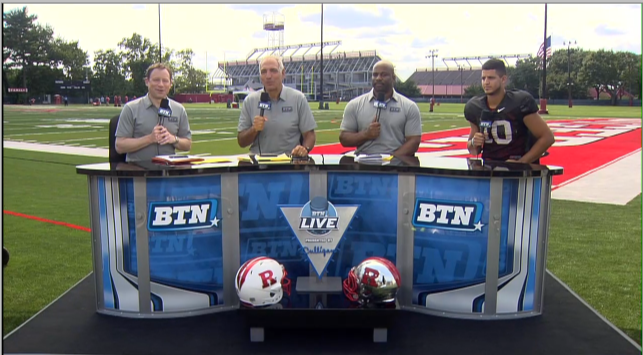 Rutgers is an interesting squad as it enters the Big Ten. The schemes are more traditional, as the Scarlet Knights to a degree have the look of a Big Ten squad. The team has new coordinators on both sides of the ball. Offensive coordinator Ralph Friedgen has brought his multiple West Coast attack with him as the program?s fifth OC in five years.

Can quarterback Gary Nova execute it? Another worry is in the trenches. Can Rutgers hold up over the course of an eight-game league schedule? The Scarlet Knights are coming off a 6-7 season under Kyle Flood with nine starters back on offense and five on defense.

Here are my thoughts from Rutgers practice:

Most impressive player: Gary Nova. The senior quarterback looks like he is coming along and poised for a nice senior season. He is strong, athletic, can run and has a nice arm. He can do a bit of everything in an offense that will require that.

Best drill: One-on-one pass rush drills between the lines. It was fun to watch OT Keith Lumpkin take on pass rushers and snuff them into the ground.

Loudest coach: D-line coach Jim Panagos could be heard across the field. He?s an ?enthusiastic? coach. Kyle Flood? He used a bull horn.

Top moment: Flood didn?t like the hustle the defense showed running onto the field and ordered it off to do it again.

On the rise: RB Josh Hicks. A true freshman with speed and instincts, Hicks is the real deal. But can he find time in a loaded backfield?

Robert Martin and Josh Hicks both impressive young RB's for Rutgers. Have a nice stable – issue will be how OL performs

Nagging question: Is the line play up to Big Ten standards?

Number: 8, number of d-linemen who legitimately could play.

Quarterback Gary Nova has a veteran command, which is good. Could he have a Matt McGloin-type senior season? New offensive coordinator Ralph Friedgen is great at working with quarterbacks, just like former Penn State coach Bill O?Brien who worked wonders with McGloin in 2012. Nova is bigger than a thought; he almost looks like a linebacker. Friedgen runs a West Coast style offense that dabbles in a bit of everything. A player with Nova?s skill set seems to be a good fit. Watch Nova sign the BTN bus.

I like the running backs. Paul James has good size at 6-0, 200 pounds, and that impressed me. You can see why he?s a physical back. Still, you wonder about his injury history. The guy has had issues staying healthy. How will he hold up in the Big Ten? If he wears down in the physical conference, the Scarlet Knights could turn to Justin Goodwin. Desmon Peoples also looks good, and Friedgen has been impressed with him. True freshman Josh Hicks showed me a burst. He arrived with a fat scrapbook and hasn?t disappointed in the early goings.

Watch my interview with Paul James:

This corps of wideouts may be underrated. Leonte Carroo is a rangy target. He made some nice catches. Ruhann Peele played corner and wideout last year; he?ll stick to receiver this season. His athletic skills are evident and you can see why he played both ways last year. And then there is tight end Tyler Kroft, who exploded last season. He?s a classic ?move? tight end, showing quickness and the ability to catch just about anything thrown his way. He could be one of the Big Ten?s best. Kroft lacks girth, looking more than a power forward. Depth at receiver may be iffy. There is talent, but it?s largely young. Andre Patton is a player with potential. He stands at 6-4 and can get down field. Janarion Grant is also coming on. The guy is quick, sticking out on one deep pattern he caught for a touchdown in one drill. He has to play a significant role, I would think.

The offensive line is nice. Center Betim Bujari and left guard Kaleb Johnson are the top blockers, although Johnson didn?t practice today. Rutgers also has been without its top right tackle: Taj Alexander. Offensive line coach Mitch Browning is one of the best in the business, but this is a challenging situation at the moment. The most impressive guy to me today was left tackle Keith Lumpkin, a 6-8, 315-pound monster who enveloped defenders in drills. Depth? Oh, boy. It?s shaky. If injuries set in, this unit may be in peril.

It was fun to watch the defensive line work. There are as many as seven or eight guys who can play. And there are some physical players. But the last time I saw this group, it was getting ran roughshod over by Notre Dame in the Pinstripe Bowl. Can the group hold up? End Dwjany Mera looks good off the edge. Tackle Darius Hamilton is a 6-4, 260-pounder with some star potential. If you are looking for a difference-maker up front, this is your guy. He?s an imposing presence who looked good in pass-rushing drills but needs some more girth. Hamilton is the son of ex-Pitt and NFL player Keith Hamilton. Julian Pinnix-Odrick also had his moments and really looks like a Big Ten lineman. He is the half-brother of ex-Penn State defensive lineman Jared Odrick.

Watch my interview with Darius Hamilton:

Linebackers Steve Longa and Kevin Snyder are interchangeable parts. Each guy can run. Longa is a tackling machine who should be on the Butkus list. But they will need the linemen to keep blockers off them in this aggressive 3-4 scheme. The secondary also needs to be watched. Safeties Lorenzo Waters and Delon Stephenson stood out. Waters can hit; Stephenson looks good in coverage-he also can play corner. The corner spots are a concern. How will this group hold up in coverage? In time, true freshman Andre Boggs may be the top corner. This team opens on the road vs. pass-happy Washington State.