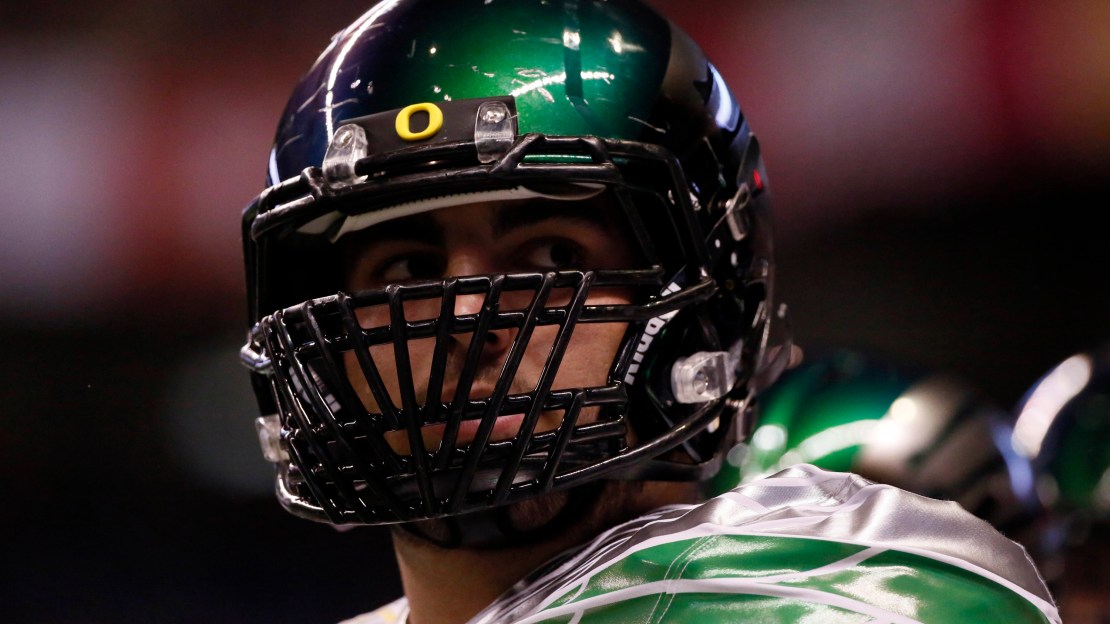 If you take a look up and down the Big Ten, you will find a number of high-profile offensive stars. Ohio State quarterback Braxton Miller is a two-time Big Ten Offensive Player of the Year, Wisconsin's Melvin Gordon and Nebraska's Ameer Abdullah are both preseason All-American candidates at running back, and Iowa offensive tackle Brandon Scherff is being talked about as the top pick in the 2015 NFL Draft.

While it is clear the Big Ten is stacked on offense, so, too, are many of its non-conference opponents. Some of college football's elite playmakers fill the non-conference slate with names such as Marcus Matiota, Everett Golson and Duke Johnson scheduled to take on the Big Ten?s best.

Here is a look at the top 10 offensive players Big Ten teams will face in 2014.

10. Maty Mauk, QB, Missouri: Mauk will take over the starting quarterback reigns at Missouri this year after making four starts last season in place of injured starting QB, James Franklin. While this will be Mauk's first year as a full-time starter, this is a guy who was outstanding in limited time last season, completing 51 percent of his passes for 1,071 yards and 11 touchdowns, compared to just two interceptions. Kevin Wilson and the Indiana coaching staff will try to slow Mauk and this Missouri offense down when they square off in Week 4 of the season. Get your popcorn ready for that game!

9. Chris Harper, WR, Cal: How do you stop a guy who hauled in 70 catches in 2013? That's something Pat Fitzgerald's team is going to have to figure out as the Wildcats get set to battle Cal in the opening week of the college football season. In addition to his 70 catches, Harper totaled 852 receiving yards and six touchdowns last season. He recorded six-or-more catches in seven of the 11 games he played in last season. Now that's impressive.

8. Dres Anderson, WR, Utah: Anderson is another talented wide receiver who Big Ten fans will be introduced to this fall. Anderson and the Utes will take on Michigan in Week 3 of the season. How about that for a matchup? One of the top freshman defenders in the nation in Jabrill Peppers vs. one of the top senior wideouts in the nation in Anderson. Get you're popcorn ready for that one.

7. Byron Marshall, RB, Oregon: Oregon is known for having electric running backs every year, and from the looks of it, 2014 should be much the same story. Marshall led the Ducks last season with 1,038 yards and 14 touchdowns on the ground. He is one of three Ducks to appear on this list, which should give you an idea of the type of talent MSU will be going up against in that Week 2 game in Eugene. This is a guy who could eclipse the 1,500 yard, 20 touchdown mark in 2014.

6. Everett Golson, QB, Notre Dame: After sitting out the 2013 season due to a suspension tied to academics, Golson is back under center for the Irish this fall, and he should make an immediate impact for Brian Kelly?s club. This is a guy who completed 59 percent of his passes for 2,405 yards and totaled 18 touchdowns in 2012, all while leading the Irish to a spot in the BCS National Championship Game. Michigan, Purdue and Northwestern will all face the challenge of slowing down Notre Dame?s talented, dual-threat quarterback.

5. Tyler Boyd, WR, Pittsburgh: Boyd was a mega-recruit for Pittsburgh, and he delivered in a big way in his freshman season. He hauled in a team-best 85 catches for 1,174 yards and seven touchdowns last season while leading this Pittsburgh offense. The Panthers will host Iowa in Week 4 of the 2014 season. Keep an eye as Boyd goes up against another sophomore standout in Iowa DB Desmond King. That will be an outstanding matchup to watch early on this season.

4. Hroniss Grasu, C, Oregon: The leader of the Ducks? offensive line, Crasu is considered by many to be the top center in the nation. For starters, this is a guy who has started 40 straight games, which is every game since he arrived at Oregon his freshman season. He is a two-time All-Pac-12 selection and was an All-American in 2013. Grasu helped pave the way for more than 3,500 yards and 42 touchdowns last season. This guy gets my early vote for the Rimington Trophy, which is given to the nation's top center.

3. La'el Collins, OT, LSU: Collins is a big boy, standing at 6-5 and weighing 321 pounds. He will be expected to anchor an LSU offensive line that should be one of the best in the country. Collins and the Tigers will face off against Wisconsin in Week 1 at NRG Stadium in Houston. It will be interesting to see if Wisconsin's rebuilt front seven will be able to get a push on Collins and this talented LSU offensive line.

2. Duke Johnson, RB, Miami: Johnson joins Gordon and Abdullah in the conversation for the best running back in the nation this season. As a sophomore, Johnson rushed for 947 yards before an ACL injury cut his season short in Week 8 of the 2013 season. Now healthy, Johnson is expected to have a big season for the Hurricanes, who will travel to Lincoln to take on the Cornhuskers in Week 4.

1. Marcus Mariota, QB, Oregon: Michigan State's stout defense will face the challenge of trying to slow down Oregon's talented signal caller in Week 2. Mariota is a preseason Heisman Trophy candidate and a guy who can get it done with both his arm and his legs. The Ducks' senior QB passed for 3,665 yards and 31 touchdowns last season, while also adding 715 yards and nine scores on the ground. This guy gets my vote as the most dominant player in college football.