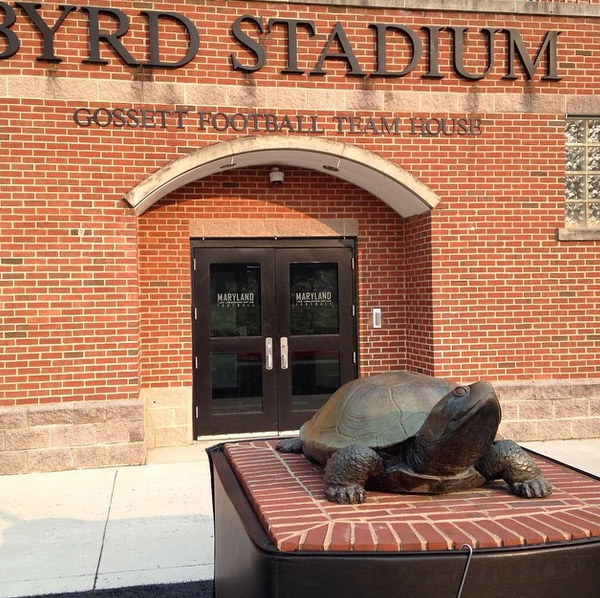 COLLEGE PARK, Md. – I was eager to check out this Maryland squad to see if my high thoughts were merited. I wasn?t disappointed. This is a veteran squad that?s well-coached. Few are more disciplined than Randy Edsall, the ultimate task-master. The Tom Coughlin protégé is a stickler for details. His teams never are out prepared.

Maryland has the makings of a strong offense that should better its 26.2-point average of 2013. In fact, this could be one of the better attacks in the Big Ten with nine starters back. The defense also looks good, as nine starters are back. Coordinator Brian Stewart had his guys flying around the ball. Offensive coordinator Mike Locksley is more than one of the nation?s top recruiters; he?s also a good coach who will have some of the league?s better sets of skill talent. If the line holds up, Maryland could have a strong offense.

Here are my thoughts from Maryland practice.

Most impressive player: Stefon Diggs. The wideout doesn?t look like he has lost any of his explosiveness after breaking a leg last year.

Best drill: Fun to watch the RBs block rushing d-linemen, trying to protect a blocking pad that acts as a QB.

Loudest coach: Greg Studrawa. The first-year o-line coach was very vocal throughout practice, encouraging players, coaching and chastising. He was just flat-out fired up. He even looks like a lineman.

Impressive newcomer: OT Derwin Gray. A 6-5, 300-pound true freshman, Gray looks like an upperclassman and was more than holding his own vs. vets.

Top moment: During passing drills, Stefon Diggs streaked down a sideline and hauled in a beautiful bomb.

On the rise: Jacquille Veii. He?s a powerful package of speed and power at 5-9, 187, a running back with go-the-distance ability.

Nagging question: Will the offensive line hold up?

BTN Tour Stop 3 #Maryland Not unusual for most B1G schools Maryland's biggest depth challenge is both O and D lines.

Number: 9, balls QB C.J. Brown tossed into a hole in a net on a passing drill.

It was nice to watch what I think is the best group of wideouts in the Big Ten. There are as many as six quality options on this corps. Stefon Diggs and Deon Long form the top receiver tandem in the league. Each had 2013 end with a broken leg (in the same game, no less). On this day, each guy looked explosive; Diggs looked good catching a few long balls. Long left practice early. Others like Amba Etta-Tawo are impressive, too, along with Levern Jacobs and Marcus Leak. New wideout coach Keenan McCardell was all over the field working with these guys. He was an active, present voice throughout.

Interesting to listen to Keenan McCardell coach the Maryland WR's. Lots of feedback from a guy who has been there

The running backs aren?t getting enough attention in my mind. Brandon Ross is looking good after pacing the team in rushing last year. He?s physical. Wes Brown was suspended last year but is back; he started three games as a true freshman in 2012. Jacquille Veil is a home run hitter. The staff likes him. He?s cut and explosive. Albert Reid is capable, too.

The line has work to do. Depth is an issue for a unit that has suffered from attrition and never has gotten much traction in the Edsall era. Sal Conaboy is one of the league?s better centers. Newcomers likely will have to help. The tackle spots need to be watched. True freshman Damian Prince looks advanced for his age but remains raw. The true freshman that?s even better is Derwin Gray, who was running with the second team. He could be special. Edsall told me he has been pleased with Michael Dunn, who has moved from right to left tackle.

This defensive front should hold up in the physical Big Ten. Coordinator Brian Stewart can disguise things from his 3-4 scheme, bringing pressure from an array of areas. Stewart likes to attack and is aggressive. It?s a fun style to watch. And he coaches it well. End Quinton Jefferson looked quick off the edge. Darius Kilgo is a space-eater on the nose. I love watching Andre Monroe. The tackle is just 5-11, but he?s difficult to block. He also stayed after practice for extra work. That always says a lot. As coaches always say: low man wins. And, that?s usually Monroe.

Watch my interview with Andre Monroe:

To run a 3-4-at least a good 3-4-you need good linebackers. The Terps have some. Cole Farrand, Yannik Cudjoe-Virgil, L.A. Goree and Matt Robinson all can run. Robinson is a former safety who moves the best; Farrand is the playmaker. These guys look impressive, too.

Watch my interview with Jeremiah Johnson:

When talk of the top Big Ten quarterbacks begins, C.J. Brown?s name rarely is mentioned. But that may change. The guy is good. He?s a savvy sixth-year senior (he missed 2012 with a knee injury) whom coordinator Mike Locksley likes to use as a runner on the read option. Brown also has a strong arm. He was zipping passes today. He has confidence and seems unflappable, as he finishes his career working for his third coordinator. Brown may have some pro potential. There were about six scouts on hand for this practice.