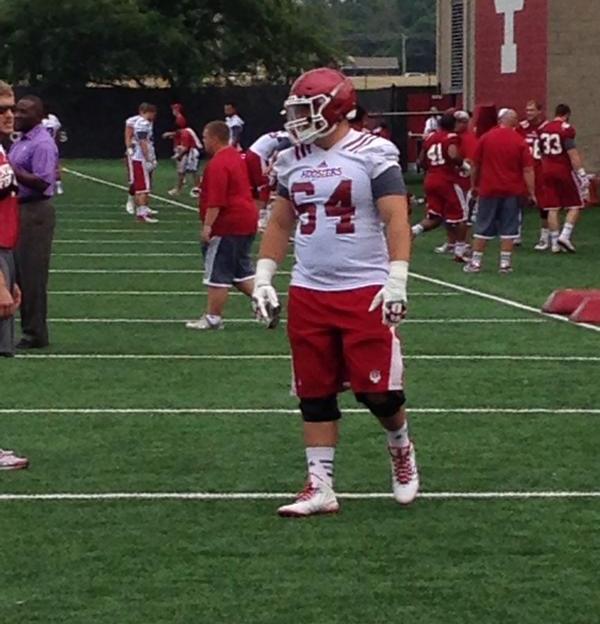 BLOOMINGTON, Ind. – Beautiful day for practice in Bloomington for an Indiana program that enters a critical Year Four under Kevin Wilson. This was practice No. 2 for Indiana, which worked out in shorts and helmets during a spirited three-hour session.

Wilson seems more relaxed, more at peace with himself and his team. These are all his guys. Wilson still flashed some of his trademark snarl, at one point ordering a player off the field for poor play, but he is calmer-at least a smidge. Really.

Is this the year for a breakthrough for what is without a doubt Wilson?s best team yet since arriving in 2011? Wilson has come close to delivering the school?s first bowl since 2007 (and just second since 1993), going 5-7 last year. But Indiana has been unable to get over the hump during his 10-26 tenure.

Lots of veteran talent dotted the field on this day, as 18 starters are back.

Most impressive player: Tevin Coleman. The junior running back already is in midseason form. He told me he?ll be more involved in the passing game. He?s one of the top three RBs in the Big Ten.

Best drill: Linemen hitting the sled. Football at its most basic form.

Loudest coach: co-defensive coordinator William Inge. ?Play like your hair is on fire!!? If I had hair, I would!

Top moment: Watching Shane Wynn streak down the sideline to make a catch. We could see this often in the fall.

On the rise: LB Marcus Oliver. When I asked a defensive assistant what players he liked, he looked up and point at No. 44, Oliver.

Nagging question: Will the 3-4 defense be an improvement?

Under the radar: DT Nate Hoff. Which this mega strong interior player. He began his career at Naval Academy Prep. Pure blue-collar tough.

Indiana has new coordinators on both sides of the ball, as Seth Littrell (offense) left for North Carolina and Doug Mallory (defense) was fired. Indiana promoted Kevin Johns to run the offense; Brian Knorr was hired from Wake Forest to run the defense after Demon Deacons head coach Jim Grobe was fired in Winston-Salem.

The quarterback job is all Nate Sudfeld?s, as Tre Roberson shocked with his summer transfer to Illinois State. Sudfeld looks the part and showed a good arm. He looks primed for a big season. The backup situation? It?s one of the diciest in the Big Ten. If Sudfeld gets hurt, Indiana may be in trouble. Walk-on sophomore Nate Boudreau is No. 2 now. But true freshman Zander Diamont figures to make a move. Still, at 175 pounds, he?s awfully small.

Looks like Zander Diamont will battle Boudreau for #2 spot. He is small – but arm is good. Sudfeld looks great – big w/outstanding touch

Talked to o-line coach/co-offensive coordinator Greg Frey after practice. He likes his group and noted that eight of his 16 linemen bench over 400 pounds. Last year, just one did. I really like this offensive line, which has come a long way in Wilson?s tenure. He committed to youth a few years ago; and that commitment now should begin to pay off with five starters back. Center Collin Rahrig may be the best of the bunch. Left tackle Jason Spriggs was inserted into the lineup as a freshman in 2012 and now looks like a man at 6-7, 300 pounds. He could be special. Left guard Bernard Taylor is as powerful a blocker as you?ll find. Frey gushed about the strength of true freshman Wes Martin, who already is in the 400-pound bench club.

I spent a good bit of time watching the defense, which is the key to Indiana?s bowl hopes. Knorr has installed a 3-4 in hopes of creating some confusion with the ability to morph fronts and attack from various spots. I heard a lot about the linebackers before I arrived. And, they showed promise. Guys like David Cooper, T.J. Simmons and Flo Hardin. And sophomores Marcus Oliver and Clyde Newton flashed. These guys have to deliver. When was the last time the Hoosiers had a good defense? Exactly. A key spot in this new defense is the hybrid linebacker/end spot that lines up standing up. Nick Mangieri ran with No. 1 unit today from that spot. Zack Shaw also took reps in the position, which must get a pass rush.

Wideout Dominique Booth arrived early from high school and took part in spring drills. And, he impressed. Booth looks good at 6-1, 200 pounds. This is a wideout corps that needs some fortification with Cody Latimer and Kofi Hughes gone. Shane Wynn is a fast-talking, fast-twitch water bug who oozes confidence who was all over the field today. True freshman Simmie Cobbs is one to watch.

Last year, I was impressed by the physiques of defensive linemen Darius Latham and David Kenney. The sophomores need to step up from their end spots. The entire line is on the stop in this new 3-4 scheme. It?s vital for these guys to tie up blocks and also make some plays. One this day, the defense lined up thusly:

BTN Bus Tour #Hoosiers Every visit we make to IU the physical appearance of the team improves. Recruiting continues to improve.

Indiana lost an all-time great kicker in Mitch Ewald. It?s vital for IU to score most times it crosses the 40-yard line, given the defensive issues. Will the new kicker be up to the task? Redshirt freshman Aaron Del Grosso is the man. Staffers say his leg has more pop than Ewald?s. But, will Del Grosso be consistent? Handle pressure? Stay tuned. On this day, he looked good.