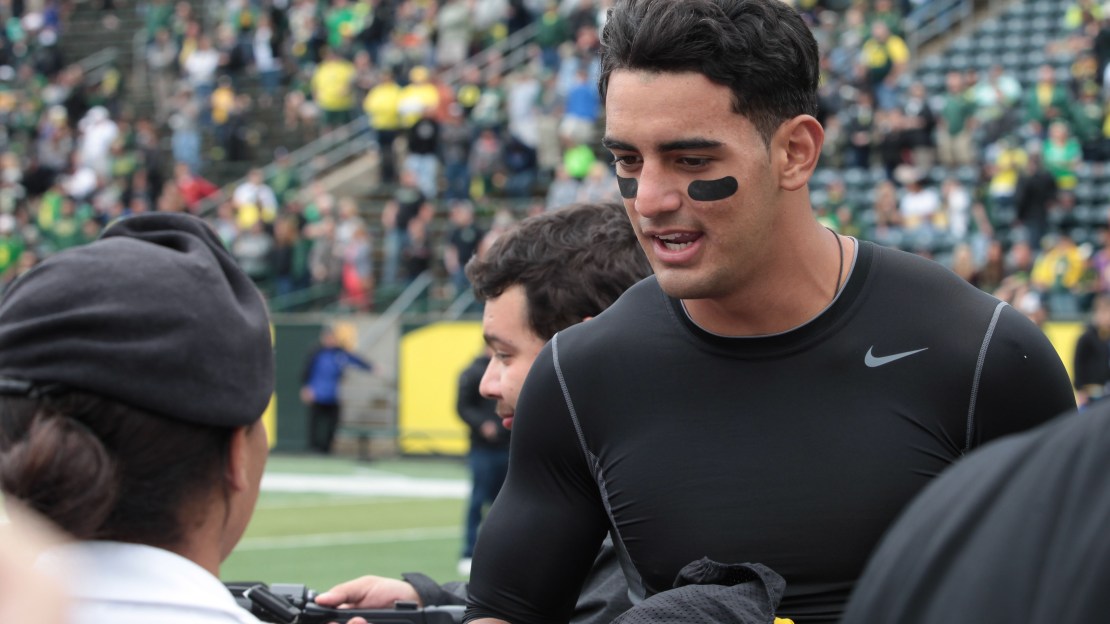 This year's non-conference schedule for Big Ten teams is one of the best in recent memory. College football royalty fills the must-see slate with teams such as Oregon, LSU, Miami (FL) and Notre Dame scheduled to take on the Big Ten's best.

Here is a countdown of the top 10 non-conference teams on Big Ten schedules this season.

10. Cincinnati (at Ohio State, Sept. 27)
Coaches Poll ranking: Unranked (honorable mention)
2013 record: 9-4 (6-2)
Returning starters: 16
Breakdown: There are big expectations surrounding this Cincinnati program in Tommy Tubberville's second year at the helm. The Bearcats return an abundance of starters on both side of the ball and are tabbed as the favorite in the 2014 American Athletic Conference preseason football media poll.

9. Virginia Tech (at Ohio State, Sept. 6)
Coaches Poll ranking: Unranked (honorable mention)
2013 record: 8-5 (5-3)
Returning starters: 13
Breakdown: After back-to-back "down" years, people are wondering what is in store for the Hokies in 2014. A bevy of talent is back on both sides of the ball, combined with a favorable schedule, which makes fans in Blacksburg optimistic about what lies ahead.

8. Miami (FL) (at Nebraska, Sept. 20)
Coaches Poll ranking: Unranked (honorable mention)
2013 record: 9-4 (5-3)
Returning starters: 14
Breakdown: This is a group that started red hot last season, winning its first seven games and owning a top-10 national ranking. However, the Hurricanes lost four of their last six games, including a 36-9 blowout defeat to Louisville in the Russell Athletic Bowl. Al Golden's team will rely on a high-powered offense, which averaged more than 30 points per game last season and returns six starters in 2014.

7. TCU (vs. Minnesota, Sept. 13)
Coaches Poll ranking: Unranked (honorable mention)
2013 record: 4-8 (2-7)
Returning starters: 16
Breakdown: Last year's win-loss record makes you wonder why TCU appears on this list, but this is a program that lost six games by single digits, four of which were by three or less. The Horned Frogs return seven starters on both sides of the ball, and while the offense did struggle at times last season, the defense was outstanding. Gary Patterson will rely heavily on his defense in 2014, which should be one of the top units in the Big 12 this season.

6. UCF (vs. Penn State, Aug. 30 – Dublin)
Coaches Poll ranking: Unranked (honorable mention)
2013 record: 12-1 (8-0)
Returning starters: 17
Breakdown: This is a group that excelled on both sides of the ball last season, averaging more than 34 points per game, while holding opponents to just 21 points. The majority of the defense returns, led by standout linebacker Terrance Plummer, along with defensive backs Jacoby Glenn and Clayton Geathers. On offense, the Knights must find a way to replace QB Blake Bortles and RB Storm Johnson, who are both in the NFL now. A week 1 showdown with Penn State will be a great opening game.

5. Missouri (vs. Indiana, Sept. 20)
Coaches Poll ranking: Unranked (honorable mention)
2013 record: 12-2 (7-1)
Returning starters: 11
Breakdown: The Tigers are coming off a memorable season, which included an SEC East Title and a win over a very good Oklahoma State team in the AT&T Cotton Bowl. The challenge for Gary Pinkel's team this season will be replacing stars on both sides of the ball, including Dorial Green-Beckham and Henry Josey on offense, and Michael Sam and Kony Ealy on defense. Indiana's high-flying offense will be a good test for this rebuilt Missouri defense.

4. Washington (vs. Illinois, Sept. 13)
Coaches Poll ranking: 25
2013 record: 9-4 (5-4)
Returning starters: 12
Breakdown: Chris Petersen takes over a talented Washington team left behind by Steve Sarkisian, who took off for USC after five seasons. Both the offensive and defensive lines return a ton of talent, but skill positions will be a big question mark for the Huskies this fall. Who replaces Keith Price at quarterback, Bishop Sankey at running back, Kevin Smith at wide receiver and Austin Seferian-Jenkins at tight end? If Peterson can find answers for those questions, the Huskies could compete with the big boys for a Pac-12 championship.

3. Notre Dame (vs. Michigan, Sept. 6; vs. Purdue, Sept. 13 – Indy; vs. Northwestern, Nov. 15)
Coaches Poll ranking: 17
2013 record: 9-4
Returning starters: 13
Breakdown: The Fighting Irish must find a way to replace several stars on both sides of the ball. Everett Golson has been admitted back into school, and will take over the starting quarterback. If he can duplicate the same success that helped the Irish get to the National Championship Game two years ago, this group should be in tip-top shape. More questions surround the defense, a unit that returns only two starters from a front-seven that struggled with stopping the run last season. The talent is certainly there for this program, but will the results on the field follow? We shall see.

2. LSU (vs. Wisconsin, Aug. 30 – Houston)
Coaches Poll ranking: 13
2013 record: 10-3 (5-3)
Returning starters: 14
Breakdown: The Tigers have won at least 10 games in each of the last four years, but that streak could be in jeopardy. Les Miles' team will feature one of the top offensive lines in the country, but replacing skill players such as Jeremy Hill, Jarvis Landry and Odell Beckham Jr. will not be easy. This is a young team, and with so many new faces at key positions, it will be interesting to see how LSU fares in the always-competitive SEC West. A Week 1 matchup with Wisconsin has the potential to be one of the top games of the year.

1. Oregon (vs. Michigan State, Sept. 6)
Coaches Poll ranking: 4
2013 record: 11-2 (7-2)
Returning starters: 16
Breakdown: Oregon returns nine starters on an offense that ranked No. 4 in the nation in scoring last season. This unit is led by a legit preseason Heisman Trophy candidate in quarterback Marcus Mariota, as well as a talented, and experienced offensive line. On defense, the Ducks will rely on All-American Ifo Ekpre-Olomu to lead a talented, speedy unit. This could go down as the nation's best non-conference matchup.