Tour preview: What I'll watch, and where I'll eat 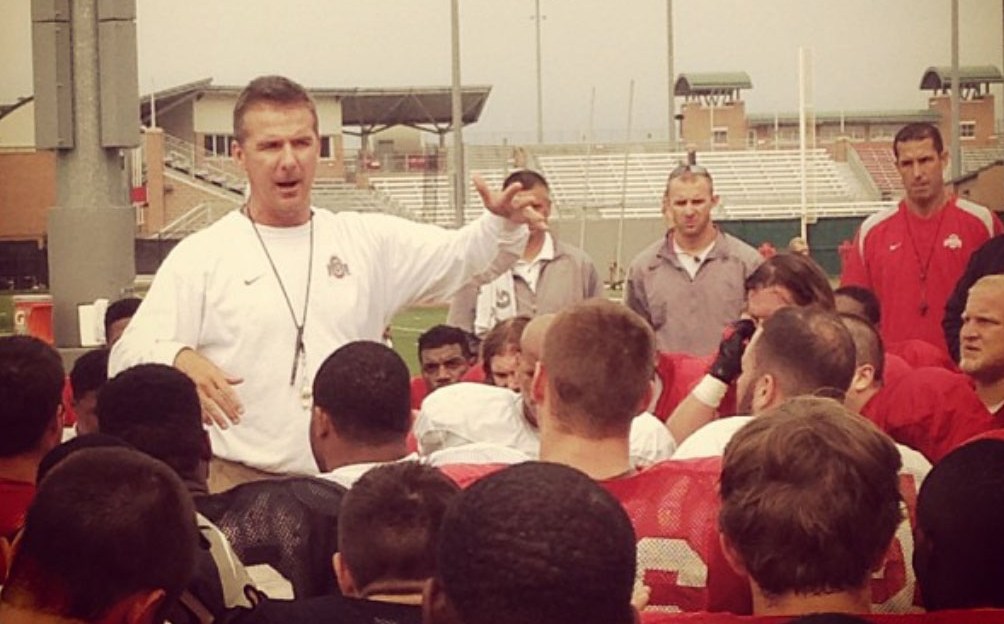 The sparkly BTN tour bus chugs away from our glistening headquarters on 600 West Chicago Ave., on Monday, as a near-three-week journey that will span from Lincoln, Neb., to New Brunswick, N.J., begins. I can't wait to see driver Kevin, drink Red Bull, shop for mesh hats at remote truck stops and see if Gerry DiNardo is still the last human on the planet who carries a handkerchief.

The mission: Watch all 14 Big Ten teams practice to get a peek at each school before the 2014 season starts. The first stop: Indiana.

Our show BTN Live is announcing each stop on its Facebook page. Like the page to see what our last few stops will be. And don't forget the show returns at 6 p.m. ET Monday.

Here is what I will be looking for at each stop-and where I hope to eat along the way. We'll add the remaining stops as soon as they are released.

Eats: Nick?s English Hut on Kirkwood. I like the Stromboli. Get the whole–not the half–you wimp.

Aug. 6: Ohio State
Has the defense tightened vs. the pass after ranking 11th in the Big Ten last season (268.0 ypg). The secondary has just one starter back (CB Doran Grant). And just one starting linebacker returns (Joshua Perry).

Eats: Varsity Club on Lane. The pizza is good, but get a burger and hum the fight song.

Aug. 7: Maryland
Are star wideouts Stefon Diggs and Deon Long as explosive as they were before breaking legs in 2013?

Aug. 8: Rutgers
Is QB Gary Nova really the answer at quarterback after being erratic his first three seasons? He has 51 career touchdown throws and 39 picks.

Eats: Stuff Yer Face on Easton. With a name like that, how can it be bad? It isn?t. Trust me. Get a Stromboli. Any Stromboli. And wear loose-fitting pants.

Aug. 9: Penn State
Is the receiving corps stepping up with Allen Robinson gone? He led the Big Ten with 97 catches for 1,432 yards last season.

Eats: The Tavern on College. If you are around for a weekend, check out Sunday Brunch. I have two words for you: omelet station.

Aug. 11: Michigan
Is a much-maligned offensive line getting a consistent push? The Wolverines ranked 11th in the Big Ten in rushing (125.7 ypg) in 2013. Keep an eye on the tackles.

Eats: Blimpy Burger on Ashley, a new location for A-Squared's oldest burger joint. Feeling hungry? Get the Quint. Yes, the Quint. If the new location isn't open, Zingerman's on Detroit is another top option. Rest up to eat the Reuben.

Aug. 12: Michigan State
Is the linebacking corps developing after losing Max Bullough and Denicos Allen? Taiwan Jones, Ed Davis and Darien Harris need to meld together for what has been the Big Ten?s top defense the last three seasons.

Eats: Beggars Banquet on Abbott. Go for breakfast. Get the Beggar?s Burrito. You?ll need a knife and fork.

Aug. 14: Northwestern
Does RB Venric Mark look like Venric Mark after playing in just three games last year because of injury? He ran for 1,366 yards in 2012.

Eats: Mustard?s Last Stand on Central. Yes, we visit NU camp in Kenosha, Wis., but stop in Evanston and enjoy a Chicago Dog in the shadow of Ryan Field on a glorious afternoon. But don?t you dare put ketchup on it.

Aug. 15: Wisconsin
Is there an answer at quarterback? Joel Stave and Tanner McEvoy are battling at a critical spot for an offense that also needs a big-play wideout with Jared Abbrederis gone after he made 78 grabs for 1,081 yards in 2013.

Eats: The Parthenon on State. I can?t walk by without walking in and ordering a gyro with extra Tzatziki sauce. I think I?m gonna pass out.

Aug. 16: Minnesota
Is the offense developing some big-play receivers who can stretch the field? The Golden Gophers had the worst passing game in the Big Ten (148.1 ypg) last season. QB Mitch Leidner also has a lot to prove.

Eats: Annie?s Parlour on 14th in Dinkytown. I got something called the ?Riverside,? a hot, monstrous concoction of all the stuff your doctor warns you about. You?ll faint when they put the plate in front of you.

Aug. 18: Nebraska
Is QB Tommy Armstrong on the mark as a passer? He hit just 51.9 percent of his passes in 2013 in making eight starts last season with Taylor Martinez out of commission.

Eats: Runza in the student union. Yes, it?s a chain establishment. Forgive me. But, I don?t care. I love these ?glamorized? Hot Pockets. Just get the Original with a side of ?frings.?

Eats: Wig and Pen on Highway 6. Lots of choices, but don?t get confused. Just get the pizza. Thank me later.

Aug. 20: Illinois
Is there any clarity to the quarterback derby among Wes Lunt, Reilly O?Toole and Aaron Bailey as the Illini look to replace Nathan Scheelhaase?

Eats: Papa Del?s Pizza on Green. Since Garcia?s is gone, this is the place. Remember these three words when ordering: Super Stuffed Pizza. You?re welcome.