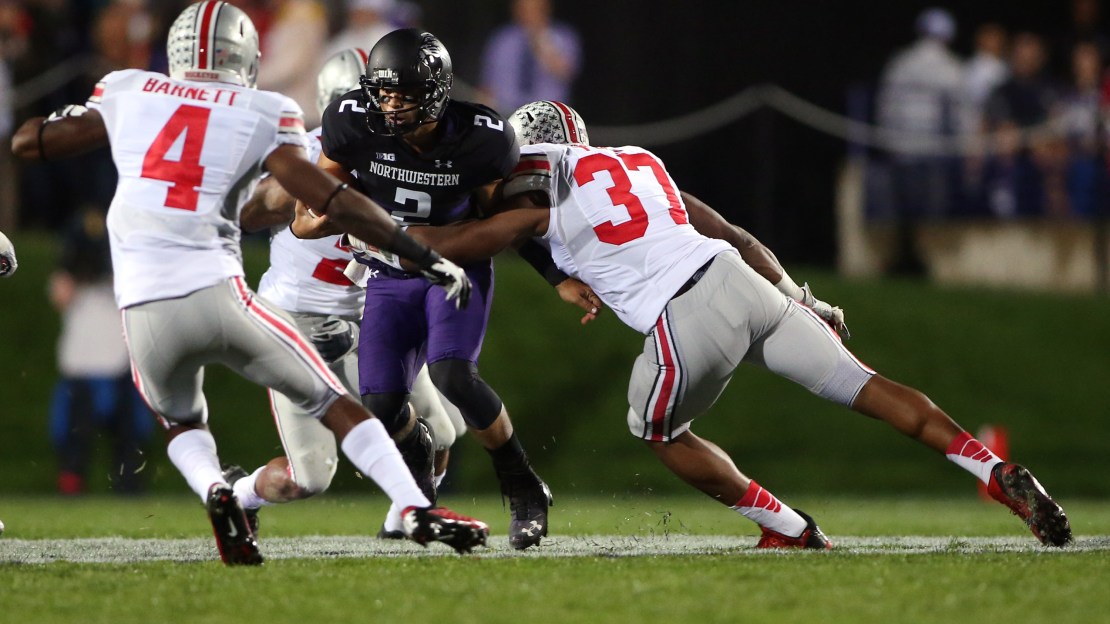 OSU strength coach Mickey Marotti is famous for his fanatical intensity when it comes to weight lifting and conditioning. Want proof? Buckeyes LB Joshua Perry posted some before and after pictures from over a two-year period after working under the screaming Marotti. This is stunning. Where do I sign up?

Some more photos: The new video boards at Penn State?s Beaver Stadium are hard to miss. Mr. Magoo can see these things from 10 miles away, for crying out loud.

You?ve heard the phrase: less is more. Well, that?s what Nebraska plans to do with its offensive playbook, which has been trimmed. Hey, do less-but do it well. It all comes down to execution.

?Whenever you do something like that - whenever you practice something that you?re good at over and over and over - we?re going to get great at them,? said Kenny Bell. ?And the things we weren?t so good at, there?s no need for them.?

More Huskers. Why? Just because and I can: This is it, the last go-around for Nebraska wideout Kenny Bell and his afro. And he wants to make it special for a program that has a good shot to win the Big Ten West.

It?s the little things–and lots of hard work–that separate you from good and great. Stuff like watching film. Bell has been all over it, according to Omaha.com. He started by evaluating the defensive backs of each Big Ten opponent. Then he watched the non-conference foes? defenses. Then he popped in tape of his favorite receivers. His favorite cornerbacks were next. Bell?s currently going back through every spring practice of his career. When practice begins Monday, he hopes to be ready to review all of the preseason workouts from the past four years.

?I had watched film before,? he said, ?but I never watched it intently for studious purposes.?

This even wears me out.

It?s all about the facilities, right? Check out this comparison between Ohio State?s new locker room and the digs at Texas A&M. I could live in these places.

No unit figures to be more scrutinized than the Michigan offensive line. It looks like the group is coming together. Graham Glasgow figures to stay at center, while Erik Magnuson is penciled in at left tackle. Still, there are many moving parts for a group that needs to come together if the Wolverines want a rebound season.

How bad was it last year? Michigan's offensive line allowed more tackles for loss than any team in the nation last year. I never thought I?d type that.

Illinois suffered a blow when o-line coach A.J. Ricker took the same job this summer at his alma mater, Missouri. But the Illini responded well by landing Tom Brattan, a veteran coach who will do a fine job.

Speaking of Illinois, it will play Iowa for the first time since 2008. That is unbelievable. Now, the boarder states will play annually as members of the Big Ten West. Good. You see, this is why geographic divisional alignment makes sense.

I think Maryland could be a sleeper team in the East. Get a load of some of this talent.

Wisconsin has developed a reputation for producing some good tight ends. There has been Jacob Pedersen, Travis Beckum, Lance Kendricks and Garrett Graham, among others. Next in line: Sam Arneson.

?He?s such a powerful kid, I really didn?t feel the extra weight was necessary,? tight ends coach Jeff Genyk said. ?He?s just so powerful with his hands, he?s got great lower-body strength. I think he?ll be a better route-runner.??

The gang at InsideNU.com has a bold proclamation: Northwestern will crack the Top 25.