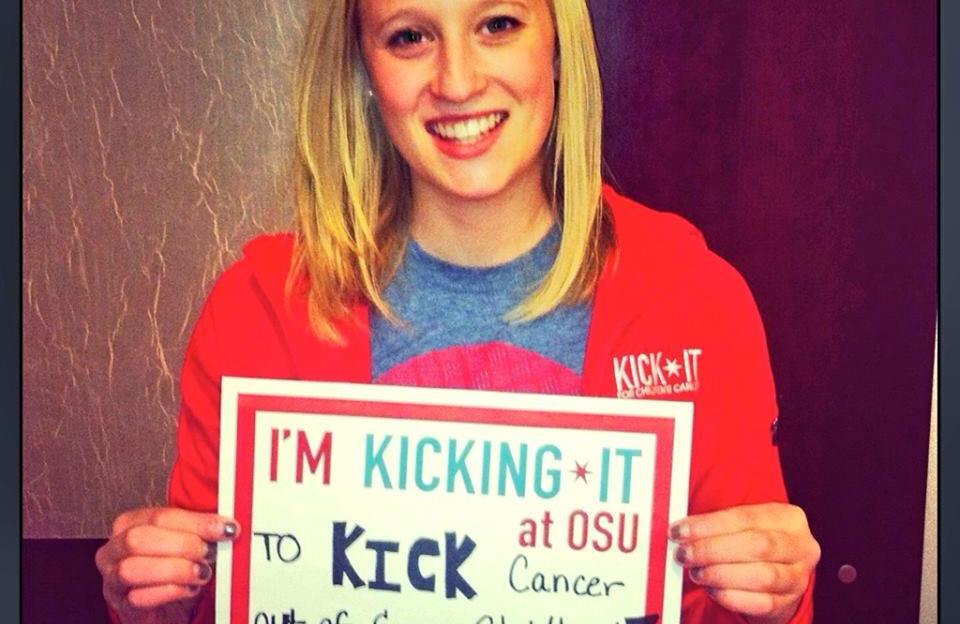 In 2008, then nine-year-old Ohio native Quinn Clarke was battling cancer for the second time in his young life. He asked his parents if he could host a kickball game to raise money for cancer research. More than 500 people came out to show their support at that first game.

Officially formed in 2009, Kick-It is a program of Flashes of Hope, a 501(c)(3) non-profit organization founded by Quinn?s mom Allison Clarke. Kick-It provides a platform for anyone, anywhere, to host a game or other event to fundraise for children?s cancer research. Since that first event, more than 900 Kick-It events have raised over $2 million to help fund pediatric cancer research.

Fast forward to May 2013. Amanda Morel, then a junior at The Ohio State University, attended a Kick-It meeting on the suggestion of her aunt, who works for Flashes of Hope.

?I fell in love with the cause, of course,? Morel said. ?And I just thought it was a great thing that you could do something really fun, but then also make a huge impact.?

Morel gathered a group of friends and created a student organization, Kick-It at OSU. The group then set about planning their first fundraiser, a kickball tournament in September 2013. The inaugural event was a success - 10 teams participated and helped raise $8,000.

Now Morel is planning the 2014 tournament, to be held Sept. 20, and her plans are even bigger. She aims to have 30 teams participate and raise $50,000 for Nationwide Children?s Hospital in Columbus. As president of Kick-It at OSU, Morel is responsible for overseeing a leadership board of eight people (including herself), acting as a liaison between the student organization and the university, and supervising all event planning. In addition to positive reinforcement from the Clarke family and Flashes of Hope, Kick-It at OSU also receives immense support from the OSU community overall.

?We have a lot of coaches and department chairs getting involved, scholar programs, different alumni groups,? Morel said. ?We have people from every single aspect of Ohio State getting involved, which is really awesome.?

Morel also commended the OSU athletic community for its support of Kick-It. At least 13 varsity athletic teams will participate in the tournament in some way, and the response from club sports has been immense as well, she said.

OSU was the first university to create a student organization to benefit Kick-It, but it likely won?t be the last. According to Morel, fellow Big Ten universities Purdue University and the University of Michigan have already shown interest in starting similar organizations. To support those efforts, OSU?s group has resolved to create a model for other students to use when implementing Kick-It at their own schools.

?It?s so much work, but it?s so worth it,? Morel said. ?It?s just amazing to see what you can accomplish and how much you can inspire other people to join you.?