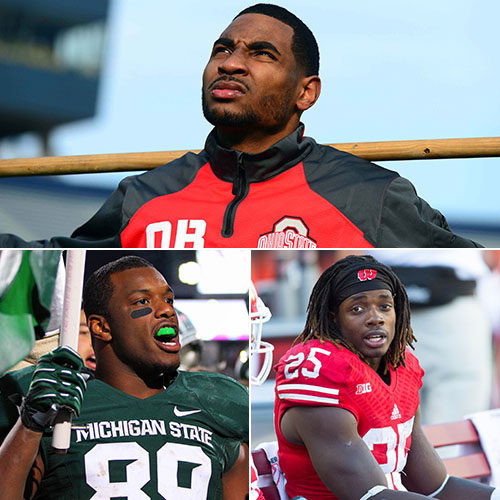 ESPN.com recently finalized a list of the top 100 players in college football this season. A total of 19 Big Ten standouts appear on the list, led by Michigan State defensive end Shilique Calhoun, who comes in at No. 4. Here is a look at where all 19 Big Ten players appear and a short blurb from ESPN on each player near the top of the list.

Check out our stat leader predictions:

"An explosive pass-rusher and the anchor up front for another fearsome-looking group of MSU defenders, Calhoun wasted no time in breaking out last season. He scored three touchdown in the first two games and rarely let up from there."

"The active FBS leader in per-carry rushing average at 8.1, Gordon led the nation in the category each of the past two season. He has lost just one fumble in his career and has topped 140 yards on the ground in nine games."

"The two-time Big Ten offensive player of the year and a top Heisman contender, Miller looks set this fall to rewrite the OSU record books. He has directed six game-winning TD drives in the fourth quarter or overtime. A championship would cement his legacy."

"A freakish athlete, Gregory arrived out of junior college days before the start of practice last August and notched 10½ sacks, the most ever by a first-year Nebraska defender. He played underweight but showed a burst from his position unmatched in the Big Ten."

"The nation's top returning rusher and third on the career FBS chart among active players, Abdullah gets his shot at a third 1,000-yard season, a feat that's never been accomplished at Nebraska. His 1,690 yards last fall ranked as the highest total at the school since 1997."

"A former high school quarterback, track star and all-state pitcher, Scherff found the right spot in college at left tackle, anchoring the Iowa offensive line. He turned down NFL riches after last season to display his otherworldly strength on the college scene for another season."