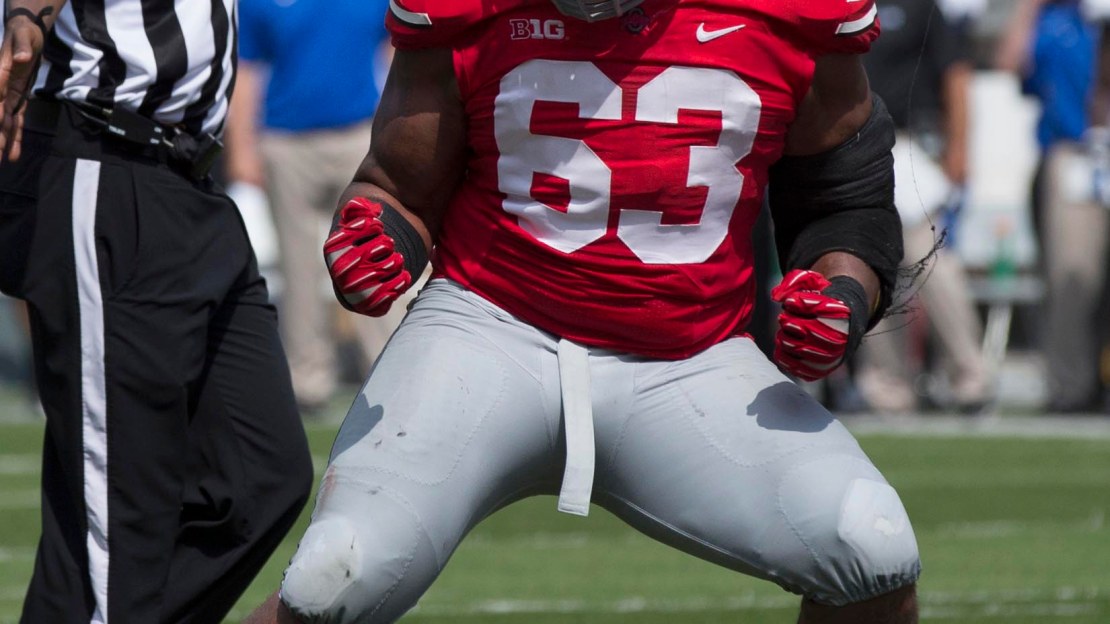 The hype surrounding the Ohio State defensive line has been growing. And with good reason. Even Urban Meyer is heaping praise on the Buckeyes? front, comparing it to his star-studded group in 2006 at Florida that was led by Jarvis Moss and Derrick Harvey that whipped Ohio State in the BCS title game after the 2006 season.

"This one, if they all perform and stay healthy, this could be at that level," Meyer said of an OSU line that features tackle Michael Bennett, end Noah Spence, end Joey Bosa and tackle Adolphus Washington.

And this is an OSU back seven that needs help in addition to freeing up.

Speaking of Urban Meyer, Penn State?s James Franklin was asked in this video if he has a little Urban Meyer in him.

Nice feature here from Jesse Temple of FOX SPORTS Wisconsin on Melvin Gordon and Ameer Abdullah. They happen to be good friends-and the top two running backs in the Big Ten.

Temple says Abdullah and Gordon first met in December 2010 during high school at the annual Offense-Defense All-American Bowl in Myrtle Beach, S.C. Gordon was a running back for one team, while Abdullah was a cornerback on the other side. Their personalities clicked — particularly over breakfast at a local Denny's during the camp.

"We built a really good relationship from that bowl game," Abdullah said. "Afterwards, we just said, 'Let's stay in contact.' Ironically, we went to the same conference and ironically we play the same position now and we're in pretty similar predicaments. It's just funny how things work out."

Dantonio announced a new team saying at Big Ten media day, saying the new mantra is "It starts here" — a reference to the Spartans putting the Rose Bowl season behind them and focusing on the future. I learned that I think the Spartans should be the favorite to win the East.

And that MSU linebacking corps? It remains unsettled.

Taiwan Jones looks good in the middle. But who will be next to him?

Rick Brown of HawkCentral.com is on board with Iowa being really good. He lays out how the Hawkeyes can get to the 10-win mark. It?s really not that hard when you look at the schedule.

We have heard lots of talk about NCAA reform, which would include a stipend. Michigan already is making plans for an annual $3,000 stipend per student-athlete.

That means Michigan, an athletic department boasting upwards of 360 students on full athletic scholarships, is looking at a new potential expenditure of well over $1 million annually.

Bo Pelini continues to show his softer, gentler side.

Tom Shatel of Omaha.com also revealed this: Look for a Wisconsin-Nebraska series trophy to be unveiled soon, perhaps this fall. Both NU Athletic Director Shawn Eichorst and Wisconsin A.D. Barry Alvarez confirmed Monday that the schools are talking about coming up with some hardware to jump-start a new Big Ten West Division rivalry.

?We have ideas,? Wisconsin A.D. Barry Alvarez said. ?We may have something coming up soon. With my connection to Nebraska and Shawn?s connection to Wisconsin, it just makes sense to do something.?

"With technology now, (the current system) is antiquated," Fitzgerald said. "The process is sped up. What we teach families, and what we teach our guys is to hold each other accountable on both sides of the fence. This way, everybody knows I've offered (a recruit) a scholarship."

Fitzgerald advocated a 48-hour decision window for recruits to either sign or decline a scholarship offer. If a recruit does not sign a national letter of intent or rejects the offer within that time frame, the offer becomes void, expediting the method of reaching the destination and forcing student-athletes to explore other options.

Interesting. But I don?t see this happening.