Spartans' defense on the prowl again 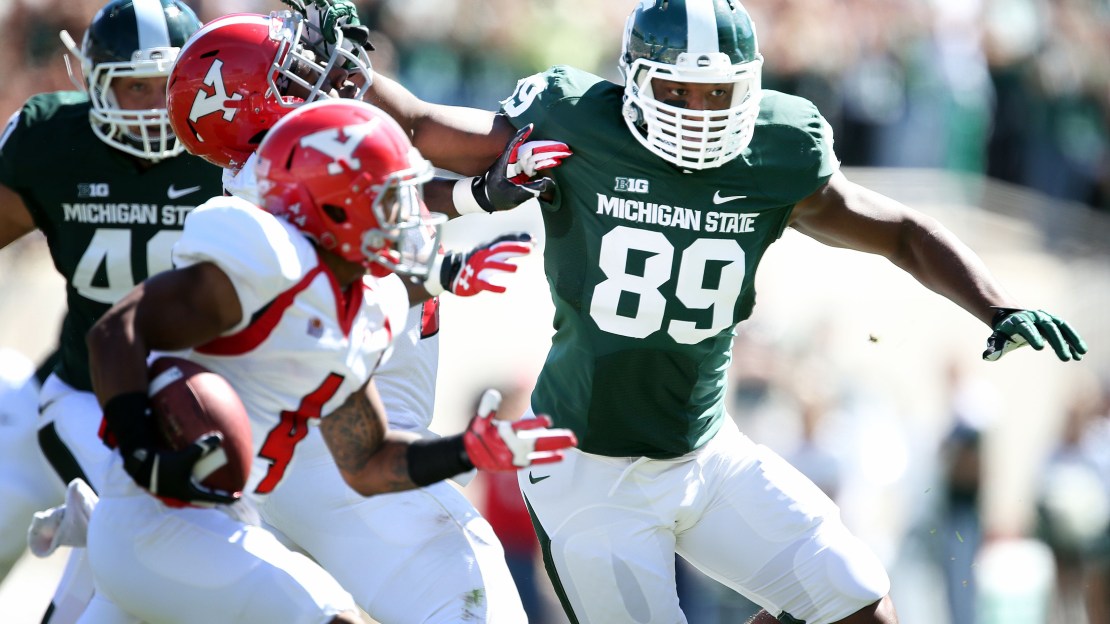 It?s mean. It?s nasty. It?s the Michigan State defense. And it has become the signature unit for the signature program in the Big Ten.

And no signature unit would be complete without a nickname. Mark Dantonio?s defensive group is aptly called the ?Spartan Dawgs.? Perfect. And the leader of this ravenous, snarling group is coordinator Pat Narduzzi.

?That defense has been very good,? said Indiana coach Kevin Wilson. ?It?s a fast defense, it?s a strong defense and it?s an aggressive defense. No doubt, it has been one of the best in recent years and is a big reason for the program?s success.

That success has included MSU going 13-1 last year en route to winning the Big Ten and capturing the Rose Bowl. Over the past four seasons, the Spartans have gone 42-12 overall (25-7 Big Ten) with two league championships.

The architect of those monster defenses has been Narduzzi, who constructed the No. 1 defense in the Big Ten for the third consecutive year in 2013. And last year was one of Narduzzi?s best yet. And he was rewarded by winning the Broyles Award as the nation?s top assistant. He also saw his salary bumped to $904,583, making him the highest-paid assistant in the Big Ten.

?Defensively, I mean, we've had tremendous success these last three years, in particular,? said Dantonio. ?I think we led the Big Ten in nine categories defensively last year. And nationally we were up there in a number of them as well.?

?That unit was led by the likes of linebackers Max Bullough and Denicos Allen, cornerback Darqueze Dennard and safety Isaiah Lewis. But those players are all gone.

?We have some holes to fill,? said Narduzzi. ?We have talent, but those guys have to step up.?

Among the players who must make a move, according to Narduzzi.

?All 11 guys need to step up,? said Narduzzi. ?But Taiwan Jones needs to show up for us to be really good. (Darian) Hicks has to do what he?s capable of doing and be the guy. And we have to find one young defensive lineman. David Beedle, Malik McDowell, Craig Evans or Enoch Smith.?

The strength of this group will no doubt be the line, which will have one of the top end tandems in the league in Shilique Calhoun and Marcus Rush. Lawrence Thomas and Damon Knox will anchor the interior.

?We have Shilique and Marcus (on the edge),? said Narduzzi. ?And we have two backups in Lawrence Thomas and Demetrius Cooper. That?s probably as good of depth as we have had at the position. Brandon Clemons is coming along; (Evan) Jones. He is a big athletic guy who keeps getting better. We have James Kittredge inside and some freshmen. They all will be great. Who can pick it up? It is our job to try to get McDowell on the field as soon as possible. He has a lot of talent.?

The back seven has the holes to fill.

?Denicos is hard to replace,? said Narduzzi. ?Ed Davis will be out there. Max will be a little harder to replace with all the knowledge he had and experience. Taiwan Jones has a lot of potential. He is a big guy with a good body who could play at the next level. But he has had experience on the outside; not inside. We have a couple guys who can play Mike linebacker, but I think Taiwan can be the guy. It?s a lot to learn.?

?We are similar in style,? said Kill. ?Not many teams play wide defensive ends, that is us and them. Narduzzi and (Minnesota defensive coordinator) Tracy Claeys have spent a lot of time together before we got into the league. We know their scheme. And they have done a good job recruiting to that scheme.

?If you can get two lock-down corners who can play press-man and take the outside receiving game away, you can do a lot of things. You then can get the extra safety support. And they have done a good job recruiting up front. They are athletic, strong and can run. They aren?t worried about size at linebacker.?

The good times are rolling. But all of this success has put a target on Michigan State.

?I think the Big Ten Conference, you've always got attention coming your way,? said Dantonio. ?And it's what you do with that and how you handle that. So what we've tried to talk about, really, is how do we handle success now. We've had success. We've gotten to a point where we've done some special things. What's on our agenda next, how do we handle that success, and that's really going to be one of the biggest things we'll have to deal with this year.

?I think we're a little bit more of the hunted. That's a good place to be, but it's also a very precarious place to be as well.?

The reason why Michigan State is now the hunted? It's the defense.