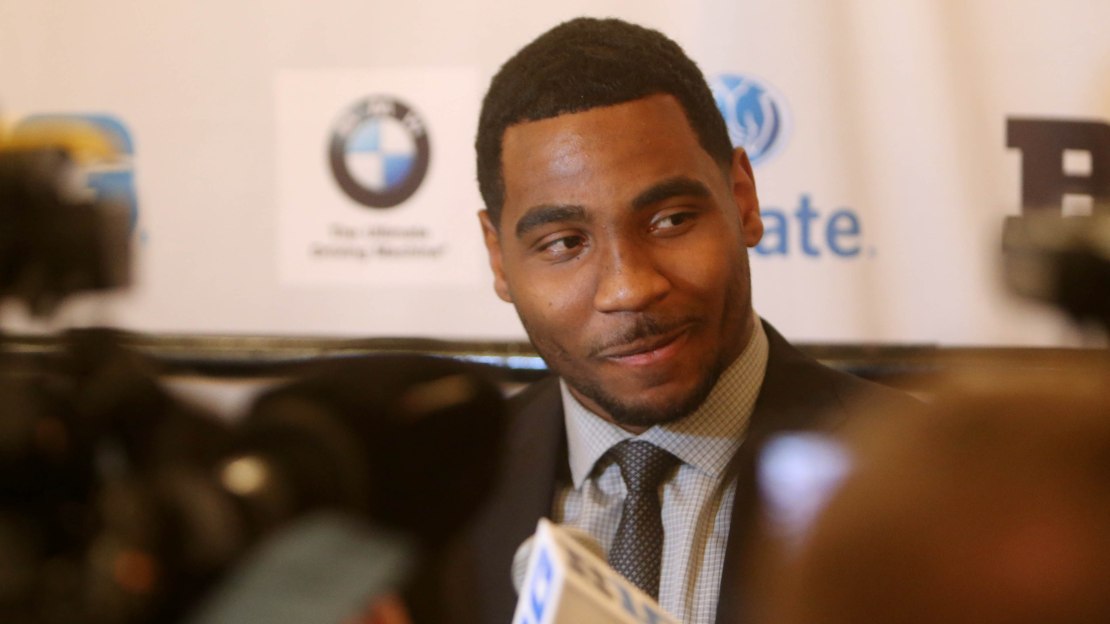 There was a smile on Braxton Miller's face as he sat down to field questions from reporters at Tuesday's Big Ten Media Day session. It was the look of someone who is comfortable with himself. Comfortable with the expectations that lie ahead.

Miller may be the most liked player among certain Big Ten fans, and the most unliked among others. But there is a reason to root for Miller this year, and it has nothing to do with being an Ohio State fan, or the fact that he is a preseason Heisman Trophy pick, for the second consecutive season.

Miller is a senior, and he is a superstar. It's not everyday you see those two words go hand-in-hand when it comes to college athletics.

Yet here is Miller, freshly selected as the preseason Big Ten offensive player of the year, entering his fourth season as Ohio State's starting quarterback, and sporting a smile on his face. The crowds surrounding him prove that he is the current face of Big Ten football, and he's not 18, 19, or even 20. He is a 21-year-old star, both on and off the football field.

These days, Miller portrays a lighter demeanor about himself. He likes to joke around with his teammates, and fellow classmates, when the time is right, of course.

"I always goof around with people, but that's my way of making others feel comfortable," Miller said. "I make it a point to be outgoing and to connect with the guys on and off the field."

That's a tough thing to do in college sports, especially as an underclassmen. But as Miller enters his final season, it has become evident that he has earned that badge of honor.

"Now that I'm a senior, my goal has become to be an even better leader," Miller said. "There are a lot of new, young guys coming in that may be lost at this time of the year. It's up to me to lead those guys."

Many college football players don't get that chance. It is rare in this day and age to see a superstar stay all four years in school, especially the star quarterback of one of the most prestigious college football programs in the country. Many of the biggest names in college football this season will be off to the NFL next season — and many of them will not be four-or-five year seniors.

That's simply not the case with Miller. He came back this season with one big goal on his mind.

"To win that Big Ten championship," Miller said. "I think about it a lot. Like all the time.

"The expectation for this team is to always win a Big Ten championship. It's always on the top of our list of team goals entering the season."

Miller is the first to admit that he wasn't ready to make the jump to the NFL after last season, especially after a shoulder injury, which required offseason surgery. However, injuries certainly haven't stopped other guys from making the early jump. Bradley Roby, Ryan Shazier and Johnathan Hankins are recent examples of guys who chose to leave Ohio State early.

But they all missed out on one thing Miller will not — A full college experience.

"There were several decisions that led to me coming back, including my shoulder, my parents, and of course, getting my college degree," Miller said. "I want to succeed after football."

Of course, the NFL remains one of Miller's ultimate goals. He worked with Urban Meyer in the offseason to prepare himself for what lies ahead. But as far as getting himself ready for the next step, that's not something Miller wants to concern himself with this season.

"I made sure I thought about all of that stuff during the offseason," Miller said when asked about his preparation for the NFL. "I need to focus on making sure I do the right things to get my teammates the ball, make sure we are in the right positions and calling the right play. I don't want to be thinking 'what's going to happen if I did this or that…'"

Is this the year Miller wins the Heisman Trophy? How good of an NFL player will he be? It's only July, and Miller still has his whole senior season ahead of him. But if you look closely, you will see that this senior quarterback has a bright smile across his face. And that's a great look for the face of the Big Ten.