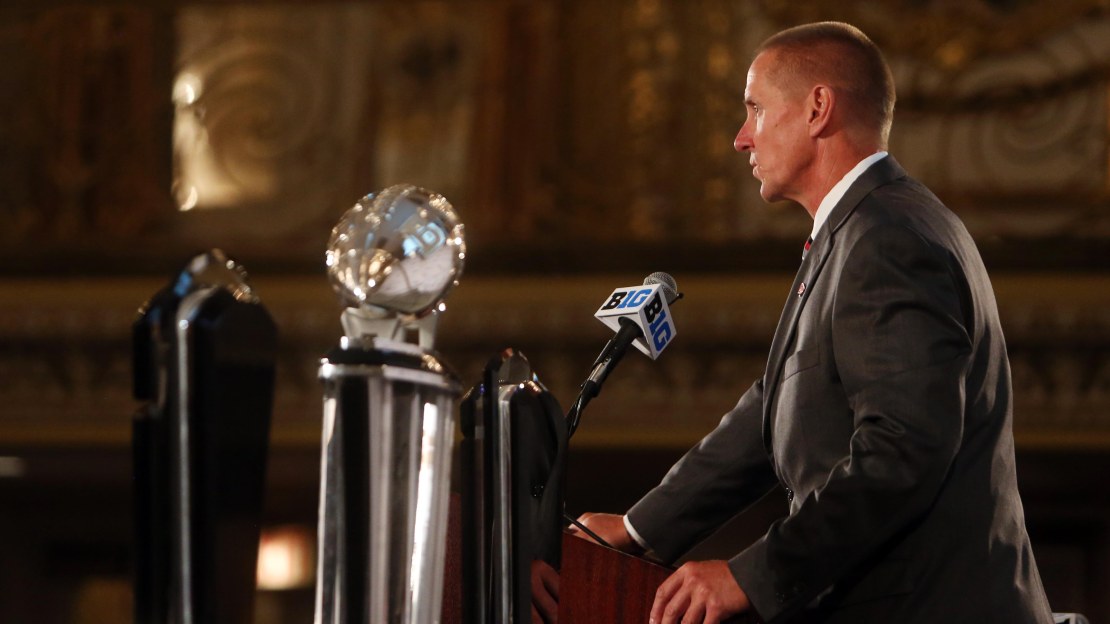 Talk, talk, talk. There was a whole lotta gabbing going on at Big Ten media days in the historic and iconic Hilton on Michigan Avenue on Monday. Here are what I feel were the 10 best quotes of a long, wild day. Watch your coach's full interview here.

Q: Some of your players last week talked about you crying and saying you weren't going to leave Vanderbilt just before you did, and then at Penn State you talked about better facilities at Vanderbilt than there. I'm curious, were you misquoted, or were those comments disingenuous?

I've read a lot of different ways the way people leave, and we tried to do it the right way. We stayed, had a team meeting, addressed the team and said goodbye.

But I hope over time that people look back and realize how much we cared and how much we invested in that program and in those kids and in that community.

That's what I hope.

Q: SEC really doesn't like your satellite camps. They went as far as to use the term competitive disadvantage in taking some of the camps to the southeast. How would you respond to them?

A: Well, the thing that's interesting, I'm not really sure why it got all the attention that it did. People have been doing this for a long time. We're a program that believes in studying best practice and get on the Internet every single morning, find out what other people are doing, see if it makes sense for our program.

It's our job to do everything in our power within the rules to give Penn State a competitive advantage. And whatever that may be, whether it's recruiting certain parts of the country, whatever it may be, whether it's the satellite camps, we're going to look into all those things. So we're going to study best practice and find what's the best way to allow Penn State to be competitive.

When we talk about being competitive, that's in the Big Ten but that's also nationally. So we were excited. It gave us an opportunity to get to the part of the country where maybe kids who aren't able to travel to Penn State we were able to bring Penn State to them.

And it was awesome. We had a great experience, enjoyed doing it. The colleges that we worked with were awesome, but the reaction, I can't speak on that. All I can talk about is what we're trying to do at Penn State, which is build a world-class program.

Q: How stacked is the East Division, and what are your thoughts on getting through that division?

A: East Division is very strong. As we get close to the season, start looking at the schedule, there's a tough run. We have three very tough road games. But the East is strong. And I have learned a long time ago you control what you can. Scheduling is certainly not who is in the East and who is on the other side.

But very strong conference. You can tell by the recruiting, too, on that side, some very good recruiting that's been going on. So that's going to be a challenge.

Q. Just curious, your first go-around here with the Big Ten Media Days, did you keep an eye what was going on in Greensboro last week with the ACC Media Days? Was it tough for you to let that go, so to speak?

A: No. I was in St. Thomas and I was enjoying the heck out of St. Thomas.

So, again, change is inevitable in life, and what you do is you embrace change. And at the end of last season, we pretty much put it forward that this is where we're going and this is what we have to concentrate on. And this is what our future is.

And, again, I've got to make sure that I keep everybody doing those things and looking straight ahead and concentrating on what we have to.

So it's great to be here in Chicago, to see everybody here and be part of this. It's really a lot of fun.

Q: What do you think can be done to stop some of the recruit flipping epidemic that's happening in college football?

A: I believe it would be a great idea if we would look at maybe getting rid of Signing Day. That's something that I think would make a lot of sense.

As far as, hey, you come to an agreement, somebody commits to your school, you've made a commitment to a young man to come play in your program, why do we have to wait to any certain day? Why don't we just go ahead and let's sign on the dotted line, let's get it over with and move forward.

And there's a lot of things that go on that I believe in our program what we try to do is teach kids to do things the right way.

And really I think that goes throughout the Big Ten Conference. I think this conference does things the right way. It's about integrity. You're teaching kids to live up to their word of what it means to be a teammate.

It's not about any individual; it's about a team. There's a bigger picture involved. And I think sometimes the way the recruiting process works is that contradictory to what we're trying to teach these kids and how we're trying to develop these kids in the long run to be successful, not only as football players and as athletes, but beyond, as husbands, as fathers, and their professions, and sometimes we always talk about having to de-recruit kids and some of that has just — it's made up of kind of the way the process is set up.

And I think there's some things that could be done, and I think that would be a big step in the right direction.

Q: You mentioned the intensity of the Michigan rivalry. How do you keep it intense when you've won five out of the last six, and what keeps the fire burning for that rivalry?

A: I continue to live in Michigan. That ought to do it.

Q. You mentioned Doug (Nussmeier) and what he's done so far. But where have you seen the difference that he's made, tangible changes he's made? And also as far as Peppers, when can we anoint him?

A: Let's anoint him when he does something, right? I mean, let's see what he can do.

Q: Do you have a timetable for picking a starting quarterback?

A: Joel Stave and Tanner McEvoy will come in and split the reps. Those first four practices when we're split, obviously one's going to be a 1 in the morning and one will be a 1 in the afternoon. D.J. Gillins will be in the middle of that argument also as he comes in as a freshman, but he will not get as many reps as the first — those first two young men.

As far as a timeline, I really have no timeline. I've been through this a few times in my career and it will all settle out just like every position battle does.

It's just the highlight of the quarterback position. Everyone wants to talk about it. I understand it. I get that. But it's no different than the battle that may be taking place at a wide receiver position or what have you. Works itself out. The kids on the team will understand it, the coaches will understand it, and at that time we'll make a statement and have a starting quarterback. It may not be until we jog off the sidelines for the first snap at the LSU game, though.

Q: What was the mood of the team like the dynamics of the team when the hearing was going on with the union, and did that change at all after the hearing, and is it better today?

A: I'm proud of the maturity our guys demonstrated throughout the whole process that we went through this offseason. As I look back and reflect upon the experiences that our young men went through and our entire football program went through, that's what jumps out to me is their maturity.

As we visited throughout the whole offseason, I believe there's no more unified football program in the country. We've been through more since probably January than most, and it's been nothing but a positive and nothing more than unifying in our locker room and throughout our entire football program. So I think we're a leg up from that standpoint.

And as I look at where we go in the future, hopefully that will just be something that we can draw upon. And it's definitely been able to I think be a springboard from a leadership standpoint for our guys to identify someone like Trevor, to see him come out and say this is my football team and see the way our seniors and leadership council stepped up to say this is what our football team is about right now, to me hopefully will pay dividends as we move in the future as we go through the adversity that I talked about with Pat earlier.

Q. Want to talk about there's been a lot of scheduling of different games in the future, and the change of philosophy, it seems, that Fred Glass and maybe yourself have put the emphasis on trying to get seven home games in the future and making the schedule a little bit more manageable than in the past.

A: This will be my fourth year at Indiana and the third time we've had six home games. I think if you go through the last decade, count the number of Big Ten teams that have been 6-6. It's called a home field advantage. It's your locker room; it's their travel. You want to play at home.

When you're a Big Ten player and you're branded as a power five BCS school, you need to target a 7-5 schedule. And our administration's been awesome. We just picked up a home and home in Cincinnati. We got Wake Forest I think coming in here next year starting in '15 and '16.

So we've got some things in place moving that way, continuing to play some other teams within our region.

But to me having seven home games was critical to having a winning program at IU. And I don't think any coach would say different, seven or eight is what every Big Ten team's looking for.