UW's Andersen: 'We have open competition at QB' 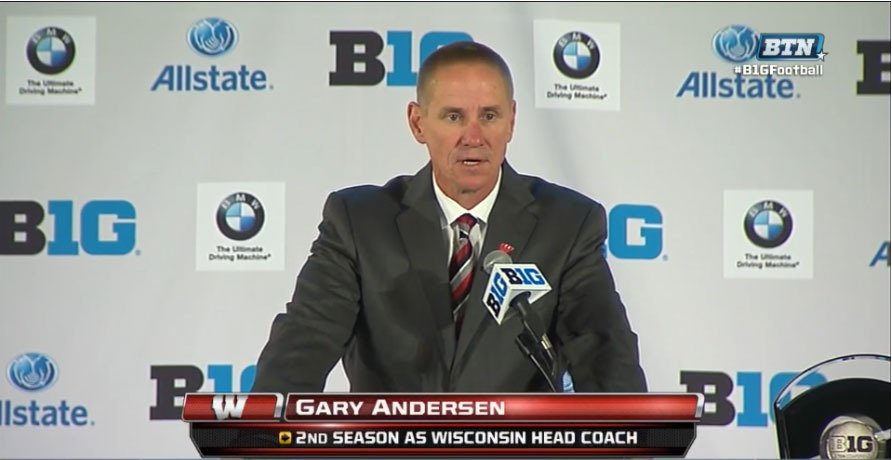 Wisconsin has been a bellwether Big Ten program, going to Rose Bowls from 2011-13 and just missing a BCS game last year before landing in the Capital One Bowl. Can the beat go on for Gary Andersen in Year Two? ?Lots of questions on offense,? said Andersen. ?Wide receiver is the big question mark. We need some men to step up."

On defense, the Badgers are replacing their front seven, as key personnel like Beau Allen and Chris Borland are gone. Will growing pains ensue?

?We are athletic up front and we are excited about the opportunity to compete to see if they can hang with our offensive line,? said Andersen. ?If they can, we should be able to put together a pretty good defense.?

And then there is the quarterback spot. Joel Stave is back, awash in experience. But he has been injury-prone and sometimes struggles with accuracy. And he isn't a physical fit for what Andersen wants under center, as he lacks great athletic ability. That?s why Wisconsin has swung the door open on the spot, with Stave battling Tanner McEvoy, among others.

?We have open competition at quarterback,? said Andersen. ?I am excited to watch them compete.?

For the most part, quarterback battles aren?t prevalent in the Big Ten as camps are about to open. In addition to Wisconsin, the only other school with a competition is Illinois.

A favorable Big Ten schedule should buffer Wisconsin as it wades into 2014, as its cross-division games are vs. Big Ten newcomers Maryland and Rutgers. There is no Michigan State, no Ohio State, no Michigan and no Penn State.

Add it up, and Wisconsin will be in the thick of another title chase.