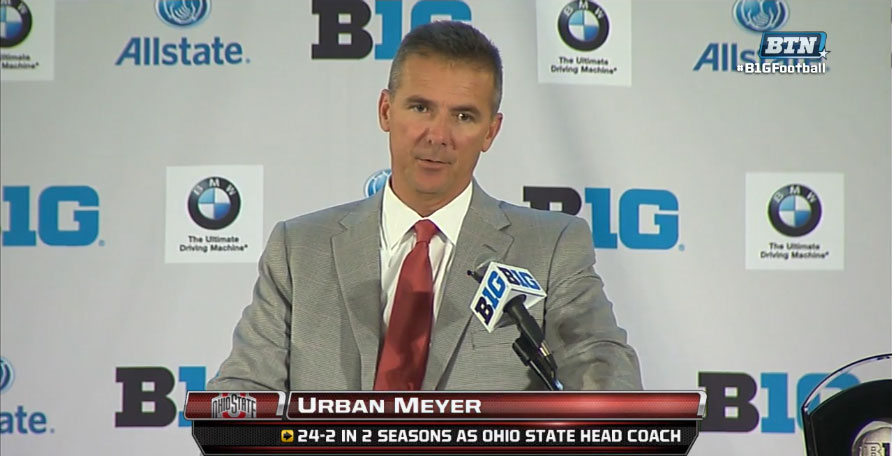 It?s strange to think of this, but Ohio State brings a two-game losing streak into the season. It?s true. Look it up. The Buckeyes ended last season with losses to Michigan State and then to Clemson in the Orange Bowl. That followed a 24-0 start to the Urban Meyer regime. Now, for his next act, Meyer is looking to lead Ohio State to its first Big Ten title since ? 2009.

To achieve that goal, Meyer?s team has some issues to resolve.

"No. 1 on the list is development of that offensive line," said Meyer.

The front came a long way under line coach Ed Warinner. But the line has four starters that must be replaced with the lone starter back being tackle Taylor Decker. The good news:

"Our quarterback is at full speed and in the best shape of his life,? said Meyer.

No doubt, having a healthy Braxton Miller means the Buckeyes will have a good chance to win all of the games on their schedule. He?s a dynamic playmaker and a two-time Silver Football Award winner. But can Miller stay healthy? It?s a worry, as he has struggled to stay on the field during his career. And star backup Kenny Guiton is no longer around to save the day.

Another thing to watch: The defense has a lot to prove, especially vs. the pass. In 2013, Ohio State ranked 11th in the Big Ten vs. the pass (268.0 ypg). The 31 touchdown passes allowed were more than any other league team. Meyer hired Chris Ash from Arkansas to co-coordinate the defense and tighten the pass defense in particular. No doubt, the back seven has a lot to prove. Meyer likes his linebackers.

"It's the best the group has been right now as far as chemistry, as far as trust, as far as operating as a unit," he said.

The secondary also has a lot to prove for a unit that has just one starter back. There may be some growing pains early on. If so, the dynamic offense may be able to cover while the defense develops in a Big Ten East race that could come down to OSU?s visit to Michigan State on Nov. 8.