NU's Fitzgerald: 'We will get back to what we do' 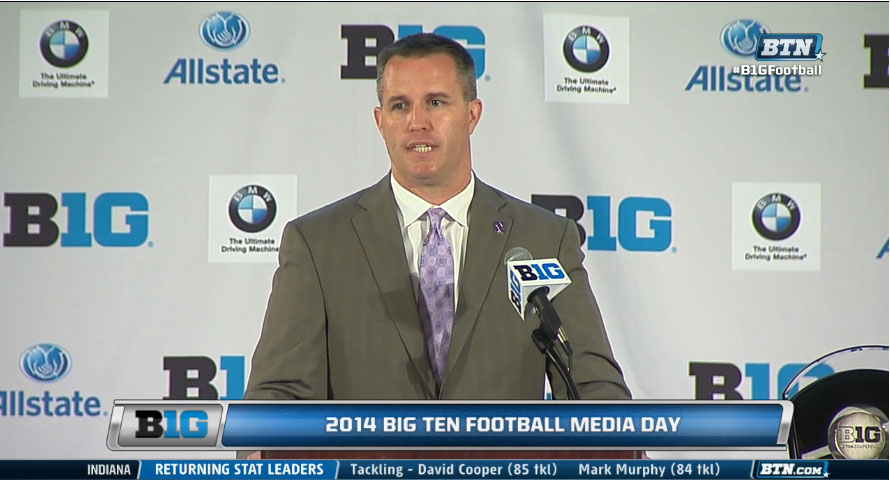 Looking for a bounce-back team? Look no further than Northwestern in what should be an intriguing and wide-open Big Ten West race. The Wildcats began 2013 glowing, coming off five bowls in a row with dreams of a division title dancing in their head. But after a 4-0 start, NU slumped to a 5-7 mark. Close losses were killer. There was a three-point defeat to Minnesota; seven to Iowa; three to Nebraska; and a triple-overtime loss to Michigan.

The Wildcats have 18 starters backs and are thinking big-again. Why not? Few coaches emote positivity better than Pat Fitzgerald.

?We went through a stretch which wasn?t much fun last year,? said Fitzgerald. ?(We) owned up to (the mistakes). We will get back to what we do.?

The key issues were two-fold, according to Fitzgerald:

?We didn?t respond well when things were out of our control,? said Fitzgerald. ?That is my responsibility as a leader. That was disappointing.

?And the way we played up front wasn?t successful. Protecting the quarterback and knocking people down.?

If on-field issues weren?t enough, NU also had to deal with the tumult of a union movement over the winter.

?We have been through more since January than most,? said Fitzgerald. ?I think that has unified us. I hope this is something we can draw on and be a springboard to leadership.?