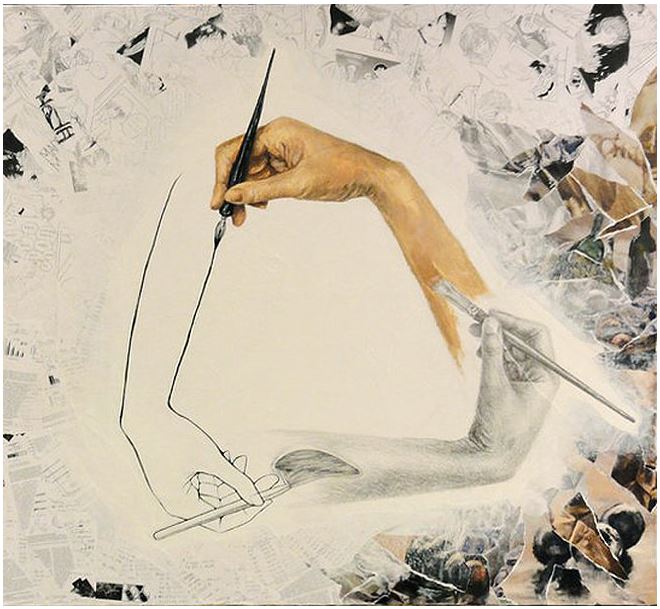 You enter a small, egg-shaped chamber and take a seat on a stool inside. After sitting, you put on a headset and stare into a mirror placed in front of you. As your thoughts slow down and your brain enters a meditative state, your reflection fades into nothing.

This may sound like a trippy, mind-altering experience - and in a way, it is. But it?s also part of University of Michigan Research Fellow Lia Min?s effort to create works of art in order to better understand how the brain works. Her three-year fellowship, dubbed ?Project LIAison,? began in January 2013. It?s co-sponsored by the university?s Life Sciences Institute and Penny W. Stamps School of Art and Design, with the aim of finding intersections between artistic and scientific endeavors, particularly where the human brain is concerned. By fusing these two disparate fields together in a single project, Min hopes to uncover new insights about people?s emotional, neurological responses to visual art.

Project LIAison includes exhibitions of artworks such as the aforementioned meditation chamber, as well as classes that engage students in a variety of ways. Her fall course, which is funded by the university president?s office, includes weekly guest lectures from visiting artists and scientists whose work crosses disciplinary boundaries. Students can attend these sessions for a single credit hour, or participate in the full three-hour course, which also includes weekly group discussions and writing classes. A winter-term class will allow some of these students to focus on an art project with a life-science angle that they devise in the fall.

It?s fitting that the fellowship is happening at the University of Michigan. Min started her collegiate career here as an art student, but she developed an interest in neurology - specifically, how the brain processed visual stimuli. This led her to take a range of life sciences courses, and she ended up graduating in 2007 as a double major in biology and fine arts. That may seem like an unusual pairing, but Min said such combinations are nurtured at the institution.

?The University of Michigan is very encouraging of interdisciplinary studies,? she explained. ?Not many other colleges are, which I later discovered.?

From there, she went on to Harvard University, where she earned a Ph.D. in Neuroscience with a specialization in visual cortex circuitry changes. However, Min quickly realized that she wasn?t going to be spending her career in a laboratory or hospital. Among other things, she believed she could do work in her field through artistic mediums that was just as groundbreaking and significant. Consequently, Min soon found herself back at her alma mater for Project LIAison.

?I used to think that science was the highest form of human understanding,? she said. ?Now I know it?s just one perspective for comprehending how the world works. Others, like art, are just as important.?