John Shoop Q&A: 'We have competition at every spot' 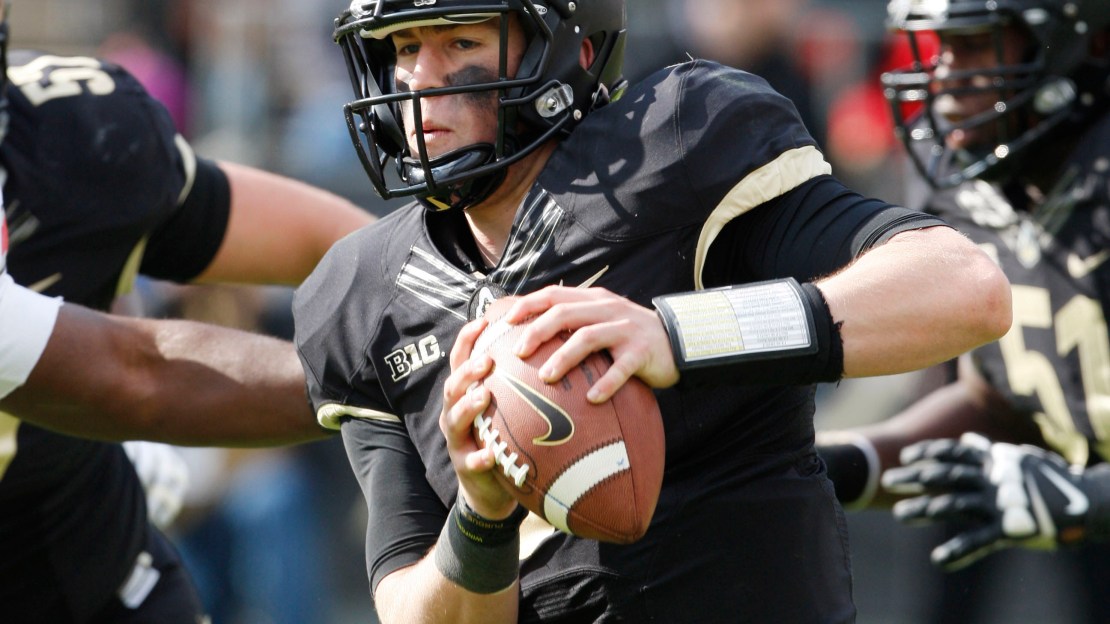 There is only one way for the Purdue offense to go after last season: up. That?s good news for coordinator John Shoop. He isn?t dwelling on the past. He?s trying to learn from it and move forward. Negativity won?t help. Positivity will. And Shoop emotes good thoughts.

There is some talent to work with in West Lafayette, but this remains a young offense that?s very much a work-in-progress after finishing last in the Big Ten in 2013 in scoring (14.9 ppg); last in total offense (282.9 ypg); last in rushing (67.1 ypg). The passing attack finished sixth (215.8 ypg).

Shoop shared his thoughts on his second Purdue offense on the precipice of the opening of training camp.

Q: Describe where the offense is compared to this time last year?
A: We had a strong spring and strong summer. Our guys kinda went through the fire last year. Their stinger is awfully sharp. I think the last half of last season, when Dan (Etling) got in there, we started playing better ball. They have worked their tails off. They have put themselves in position to compete. We are gonna be tough to beat this year. We have some guys who probably can make some plays. I really believe that.

Q: Is Danny Etling the quarterback?
A: We have competition at every spot. Dan really came on strong at the end of last year. He?s an accurate guy, he?s a bright guy. He?s probably a better athlete than he?s given credit for. Austin Appleby and David Blough are two guys who won?t concede anything. That?s kinda how we want it. They are breathing down his neck. No one has tenure.

Q: Is the line coming together?
A: We have one guy in (Robert) Kugler at center who is a coaches? son. He has a lot of natural leadership about him. He?s really worked hard to foster camaraderie. I think we have a chance to be a pretty tough group. He?s gritty and will fight you.

Jason King at left guard and Jordan Roos at right guard, I?ve never seen one of those guys where the other two weren?t with them from the end of last season until today. Those three have been inseparable in the offseason. We need them to protect those A and B gaps.

We have good competition at tackle with the JC guys coming in. J.J. Prince and Jack De Boef were the tackles in the spring. Prince had a strong spring and we hope that translates to the fall. (Cory) Clements could play inside or outside. (David) Hedelin is probably gonna be a tackle. We are counting on those JC guys helping us.

Q: Will you get production from the tight ends?
A: Having Gabe Holmes back is good. He got injured early last year. He got a redshirt. You put him and Justin Sinz together, those are two seniors with some experience. We need Sinz to be a leader for the offense. We think they?ll have more production the better our quarterback gets. We also moved a big receiver named Dolapo Macarthy to tight end. He weighs about 235 and will be a hybrid guy-half tight end and receiver. We are counting on him coming on strong. They all are seniors.

Q: Any playmakers at receiver?
A: I think we have some guys who can really make some plays. The good news is a lot of those freshmen are now sophomores. DeAngelo Yancey, B.J. Knauf, if they can stay healthy this year we expect to make some plays for us. Danny Anthrop was injured the first half of last year and came on strong. We expect a great deal from him. We have some good receivers who are doing a good job finding some holes in zone defenses and working hard to beat man to man. This group has worked as hard in the offseason as any group I have been around in my coaching career. So many of the wideouts were freshmen, the quarterback was a freshman, many of the linemen were freshmen. They are now sophomores. Their stinger is sharp. They have grown this offseason.

Q: Is the situation at running back stable?
A: We will use Raheem Mostert at tailback. He had a strong spring running but knows he needs to become more of a complete guy. He needs to play as well without the ball in his hands as he does with it in his hands. He is awfully fast.

We have gotten better up front. We will make it tough if teams play us man to man. If there is one line of defense, we can get this guy to the second line of defense, he can go the distance. He needs to run with his pads down, focus on ball security and become a more complete back. He can do it. He has to do it. He has a lot of work to do. We are excited.

Q: How would you describe your philosophy?
A: We are concept-driven. We run concepts, formations, motions, shifts. It may make the same plays look different. We try to teach concepts, not just plays. Our guys have worked hard to learn the concepts. We think we have some quarterbacks who are intelligent, accurate and good decision makers. When you have those things, you have a chance to have a balanced offense. Are we a run team? A pass team? I hope we are a balanced team. We have quarterbacks who check from pass to run plays and vice versa. We probably didn?t have that this time last year. These guys have at their disposal some options and tools to fight back with.