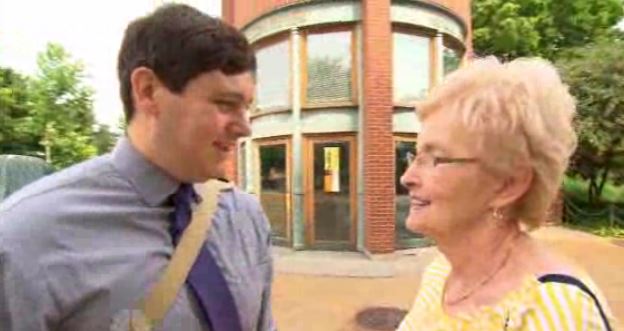 At Northwestern University, a unique spin on the Buddy System is pairing first-year medical students with people who suffer from the early stages of Alzheimer?s disease or related dementias.

The Cognitive Neurology and Alzheimer?s Disease Center (CNADC), part of the Northwestern University Feinberg School of Medicine, created The Buddy Program in 1998 to allow students the opportunity to create a new relationship with Alzheimer?s sufferers outside of a clinical setting.

The students are not charged with caring for the patients. They are given the assignment of making a new friend and getting a sense of what Alzheimer?s sufferers are going through, thereby experiencing difficult patient care.

The Alzheimer?s sufferers, in turn, are given the opportunity to bond with someone who?s several decades younger than they are.

?I tell the students this is not a clinical encounter; these are not your patients,? said Darby Morhardt, research associate professor and director of education for CNADC. ?They are there for the opportunity to learn from this person and become their friend. And reciprocally, the patient is there to become a friend of the student. It is wonderful because it is generational, a friendship that can evolve.?

As part of The Buddy Program, students receive a three-hour orientation on Alzheimer?s disease and communication skills, then are matched with a patient buddy who lives in a location convenient for the student to visit during the academic year. There are also monthly group meetings and educational seminars.

The buddies spend at least four hours a month together. They first meet each other at Buddy Match Day, where they tell their stories and make their plans for the year. Family members are encouraged to meet the students as well to facilitate the buddy visits.

The Alzheimer?s patients selected for the program are usually in the early stages of the illness and are tested to ensure they understand the parameters of the program.

The students who get involved are not usually aiming for a career in Alzheimer?s treatment.

?I always ask them ?What do you want to be?? and most of them have no idea; they are quite open to all the possibilities,? Morhardt said. ?The point of the program is not trying to turn people into geriatricians or neurologists.

?But most of the students who do join the program end up in patient care-oriented fields. They are not your surgeons or radiologists; they become internists, primary-care physicians, family practice, emergency medicine. We have had quite a few of our people become pediatricians.?

While Morhardt works exclusively with medical students, she said she hopes to see the program advanced to where students from other disciplines could get involved. ?I think students studying social work would benefit from the program as well,? she said.

The Buddy System is a success, and the proof is partly in the fact that medical schools at eight U.S. colleges are duplicating these efforts. Morhardt has also heard from a school in Italy and another in England that are attempting similar initiatives.

But it?s what she hears from those involved in the program at Northwestern that really demonstrates value to her.

?It is when I get feedback from the patient, that they really enjoy being with this bright young person, and they appreciate being able to have the opportunity to have an impact or influence on their education,? Morhardt said. ?And then, when the students tell me ?I have a different idea about Alzheimer?s now than when I first entered the program,? I know that it worked.?