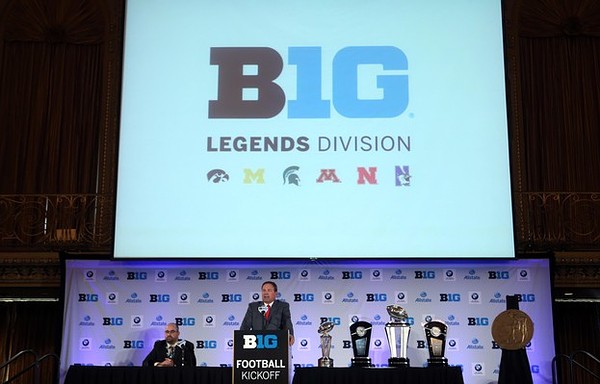 Big Ten media days kick off Monday in Chicago. Myriad queries will be asked by reporters, but not all of them will be posed or answered. Me? I have a long list of questions-101, to be exact-as we sit on the precipice of the 2014 season.

So, for a little fun, I shared my questions with colleagues Brent Yarina and Sean Merriman to see their answers. We broke the activity into two parts, and you can see the second installment here.

51. Will Braxton Miller win a third consecutive Silver Football as the Big Ten Player of the Year?

BY: Most likely, but it might come down to the winner of the Ohio State-Michigan State game.

52. Is this the year that Penn State finally feels the impact of NCAA scholarship sanctions?

SM: I don't think they will feel it any more than they have in the past. Really, the talent is there to succeed, but because of the sanctions, depth is an issue.

BY: Only if the defense can go from terrible to below average.

54. Can Purdue win more than one game?

55. Michigan plays three tough road games: at Notre Dame, at Michigan State, at Ohio State. Will it win any?

56. Will the Nebraska at Iowa game on Black Friday be a de facto West Division title game?

SM: No. Don't count out Wisconsin and Northwestern.

57. Who will be the playmakers on Minnesota?s defense?

BY: Get to know this name: Theiren Cockran.

58. Will QB Gary Nova lose his job at Rutgers?

SM: No. He will be tested, and perhaps benched at some point, but he will be the main QB for the Scarlet Knights this year.

BY: Sure, as long as it improves on its 11 takeaways.

60. Will a quarterback controversy erupt at Purdue?

SM: No. Danny Etling is the future, and the present at Purdue.

61. Should we be worried about Michigan State?s offensive line with just two starters back?

BY: Mildly. Center Jack Allen is a stud, and that's a great starting point.

62. If Indiana goes to a bowl, should Kevin Wilson be Big Ten Coach of the Year?

SM: I think he will be in the mix, but he will undoubtedly have some steep competition.

BY: Give me Devin Gardner. He is inconsistent, but he's no stranger to eye-popping stat lines.

64. Who has an easier schedule: Wisconsin or Iowa?

SM: Iowa. The Hawkeyes get Nebraska and Wisconsin both at home, and they don't have to open their season against LSU.

[ MORE: See which B1G players will be at media days | And ex-players, too ]

SM: Could they… Yes. Will they… Don't count on it.

SM: Of course, but Trae Waynes could very-well be the top cornerback in the Big Ten this season.

BY: Its two "easiest" opponents (Illinois and Indiana) come on the road, so it could be tough.

BY: Having a healthy Jake Ryan for the entire year will help.

72. Who will be the league?s top newcomer?

73. Can Michigan State win at Oregon?

BY: I think Michigan State could win anywhere.

74. Can Wisconsin beat LSU in Houston?

SM: Yes, but it certainly won't be easy.

76. Purdue shocked Notre Dame in Indianapolis in 1984. Can it repeat the feat 30 years later?

SM: Nope. Not this season.

77. Is Indiana RB Tevin Coleman the most underrated player in the Big Ten?

78. Will Michigan rush for more than minus-48 yards at Michigan State on Oct. 25?

SM: Yes. Perhaps the better question is whether or not they will rush for positive yardage.

BY: No. The cat has given us a kinder, gentler Bo.

80. Who will lead the league in tackles?

81. Is the East really that much better than the West?

82. How many trophy winners will the league produce?

BY: Nope. California is home to some great talent, and Nebraska is a national school.

84. Does any school have a tougher schedule than Rutgers?

SM: Nope. Although, Maryland's schedule is no cake-walk either.

85. Will Northwestern learn how to win close games?

BY: These things have a funny way of evening out.

86. Does Nebraska have the best set of receivers in the conference? Or is it Maryland?

SM: I think that award goes to Maryland. This team has five guys who caught 30-plus passes last season. Can you say "impressive."

87. If Nate Sudfeld gets hurt, is Indiana doomed now that Tre Roberson has transferred?

BY: If I'm Kevin Wilson, my toes are crossed.

88. Will Michigan State find a way to use QB Damion Terry?

SM: Yes, he's simply too talented to keep off the field.

89. Will Illinois find a way to use QB Aaron Bailey?

BY: Yes, in the red zone, especially near the goal line.

90. Does Penn State have the best set of tight ends in the league?

SM: Yup, without a question.

91. Could Maryland have the top offense in the Big Ten?

BY: Wouldn't be a big surprise, although I could make a case for Indiana, Michigan State and Ohio State.

92. Will offensive coordinator Ralph Friedgen have a big impact at Rutgers?

SM: I think so. This team already plays with a Big Ten mentality, now the question becomes do they have the size and skill to compete.

BY: One, at most. Hopefully.

94. Could Northwestern have the best secondary in the league?

SM: They could, yes, but I'm going to give a slight edge to MSU's "No Fly Zone."

95. Is this Bo Pelini?s best defense since Nebraska joined the Big Ten?

BY: It has some nice talent and athleticism, but let's wait and see on this one.

96. Can Iowa deal with big expectations?

SM: Yes, although I'm not sure this year's expectations are any bigger than in the past, especially after losing so much talent on the defensive side of the ball.

97. Is Devin Smith poised to be a star wideout for Ohio State?

BY: Absolutely. He had 688 yards and eight TD last season.

98. Who will be Minnesota?s top wideout?

99. Will Taiwan Jones be a reasonable facsimile of Max Bullough in the middle of the Spartan defense?

BY: I'm pretty confident Jones is about to become the next stud Spartan LB.

100. Will Michigan true freshman CB Jabrill Peppers be as good as advertised?

SM: Perhaps. But don't expect him to be an All-American his freshman season.

101. Will Wisconsin RB Melvin Gordon get a chance to rush for 2,000 yards rushing?