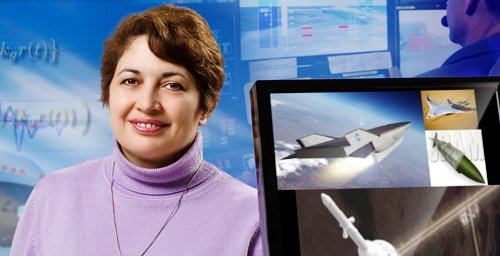 If you?ve ever white-knuckled it through turbulence at 30,000 feet or trembled at the thought of a near-collision with another airplane, take comfort knowing that some of the world?s most innovative engineers are working diligently to make flying safer.

University of Illinois Professor Naira Hovakimyan is one of those engineers, and her impressive work in the field of control theory and engineering has recently been honored with the Alexander von Humboldt Research Award. Also known as the Humboldt Prize, it recognizes a recipient?s entire body of work, but it?s Hovakimyan?s research with her frequent collaborator, Professor Florian Holzapfel of the Technical University of Munich, that made this award possible, she said.

Hovakimyan recently traveled to Germany for the first of several extended trips (usually a few months each) over the next three years. She and Holzapfel?s group will continue to collaborate on improving aircraft-control systems. This methodology - L1 adaptive control - has the potential to increase safety in conditions that make it difficult for a pilot to stabilize the aircraft.

?Several years ago, Professor Holzapfel arranged for me to have a week of various meetings with representatives from German industry, and many of them agreed to fund the research that would allow us to explore integration of our control methodology into various models,? Hovakimyan said.

This industry funding provided Holzapfel?s team with a long-term base with Hovakimyan in Illinois. She explained that at any given time, two to three students from Holzapfel?s group live in Illinois for six months to a year. During that time, they work on L1 adaptive control, ensuring it is implemented correctly and then reporting on its results. ?The clear advantages of my group?s methods have been demonstrated, and that led Professor Holzapfel to nominate me for the Humboldt Prize.?

Between 2007 and 2010, NASA conducted control tests in extremely adverse flight conditions using generic transport model aircraft that were slightly smaller than standard size. Hovakimyan?s L1 adaptive control was the only method among all of those tested that allowed the pilot to regain control of the aircraft as it flew into severe vertical angles that caused it to stall out. If further trials show this system to be effective for full-size airplanes in flight, it could save dozens of passengers? lives each year.

With a doctorate in mathematics, Hovakimyan explained that her approach to engineering is thoroughly science-based and grounded in mathematical rigor - a philosophy she felt was a good fit at the University of Illinois. ?It gives me the opportunity to demonstrate new science, it motivates me to look for new breakthroughs, and it gives me the joy of working with respected collaborators.?

It was during her time at Virginia Tech, when Hovakimyan was developing the L1 adaptive control method, that a number of prominent institutions began to actively recruit her. ?Among all of the opportunities I had, I chose University of Illinois because of its high ranking, the exceptional students and outstanding faculty - particularly in my area of research in control. These faculty were who I wanted my students taking classes from.?