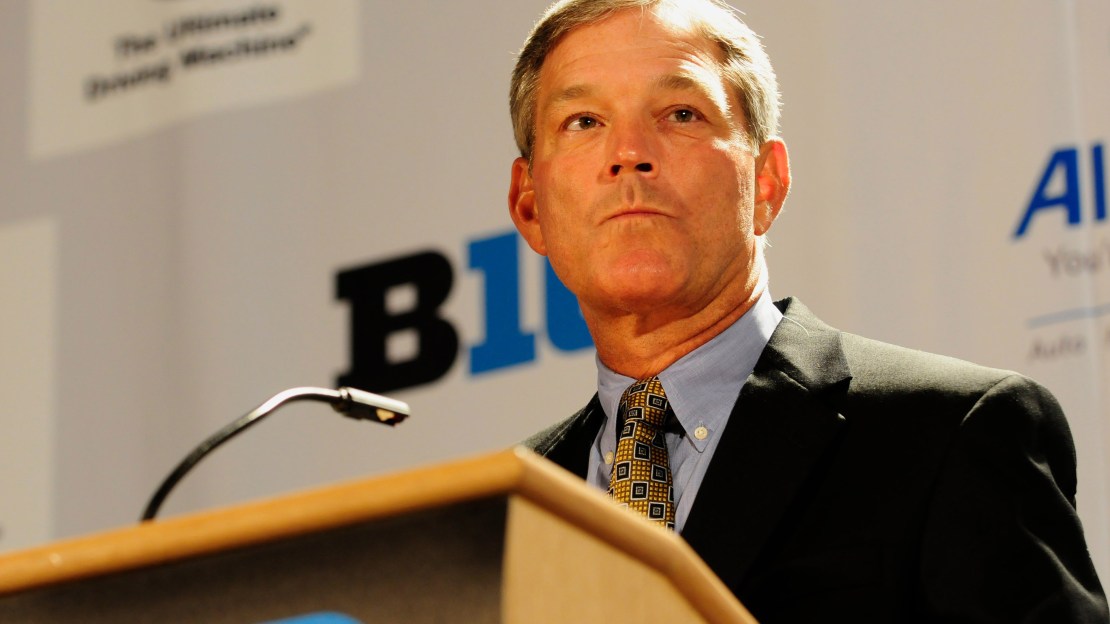 Big Ten media days kick off Monday in Chicago. Myriad queries will be asked by reporters, but not all of them will be posed or answered. Me? I have a long list of questions-101, to be exact-as we sit on the precipice of the 2014 season.

So, for a little fun, I shared my questions with colleagues Brent Yarina and Sean Merriman to see their answers. We broke the activity into two parts, and you can see the first installment here.

1. Can Michigan State stay hungry coming off a 13-1 season for the ages that included Big Ten and Rose Bowl titles?

Brent Yarina: Definitely. This is a team that has national championship dreams.

2. Will Michigan?s offensive line get a consistent push?

Sean Merriman: I want to say yes, but it's going to be a challenge as this unit lost both starting tackles to the NFL. New OC Doug Nussmeier is going to have to get creative with this group.

BY: Yes. They're going to be talented, and they'll be blocking for a prolific offense.

4. Will Iowa have some big-play threats at receiver?

5. Is there a go-to wideout on Wisconsin?s roster?

BY: Not right now, no. Expect to see a lot of Melvin Gordon and Corey Clement.

6. Will a Big Ten team make the new four-team playoff?

SM: The winner of the Nov. 8 matchup between Michigan State vs. Ohio State game will be in the four-team playoff.

7. Will a Big Ten team make the national title game?

BY: The national title game? Perhaps. The playoff? Most likely.

[ MORE: See which B1G players will be at media days | And ex-players, too ]

8. Will a Big Ten team win the league?s first national championship since 2002?

SM: Probably not. Look out for that Week 2 matchup between Oregon and MSU. That could be telling.

9. Who are dark horses for the Big Ten title game?

BY: Northwestern and Michigan.

10. Will Braxton Miller make it to New York as a Heisman finalist?

SM: If he can stay healthy for a full season, of course. That's important.

11. Which coach will draw the biggest crowd at Big Ten media days?

BY: Either Urban Meyer or James Franklin.

12. Which player will draw the biggest crowd at Big Ten media days?

SM: Braxton Miller. He's a senior, a Heisman Trophy candidate, and the quarterback of a preseason top 5 team.

13. Will Nebraska win its first conference title since 1999?

BY: No. They might be the best team in the West, but they have the hardest schedule of the contenders.

14. How many bowl teams will the Big Ten produce?

17. Will Northwestern return to the bowl business?

BY: Definitely. Last year was fluky, and this team returns a lot of the talent from the 10-win 2012 squad.

18. Can Rutgers? defense withstand the weekly physicality of the Big Ten?

SM: I think Rutgers' style of play matches that of the Big Ten, but size and physicality could hold this team back.

19. Is QB Wes Lunt-an Oklahoma State transfer–really the stud many portray him to be for the Illini?

BY: It will depend on his receiving corps. RB Josh Ferguson can't be the best pass-catcher.

20. Or will a quarterback controversy ensue at Illinois?

SM: I doubt it. Lunt looks like he has all the tools to be a stud.

BY: Yes. The emergence of Treyvon Green will lighten his workload.

SM: I think this unit will start slow, but will improve as the season progresses. A favorable schedule certainly helps the cause.

23. By the end of the year, will Michigan State?s Connor Cook be the Big Ten?s best quarterback?

BY: No. While not the top pro prospect or premier passer, Braxton is the Big Ten's best college QB.

24. Is Brady Hoke under pressure?

25. Will Ohio State have a better pass defense?

BY: Chris Ash was brought in for one reason.

26. Can new coordinator Brian Knorr give Indiana?s defense some teeth?

27. Who will be Penn State?s big-play receiver?

BY: It's got to be Geno Lewis, right?

SM: Yes, but Taiwan Jones is a stud and Ed Davis is a freak off the edge.

BY: If Berkley Edwards lives up to the hype, yes.

30. How much impact will new coordinator Doug Nussmeier have on the Michigan offense?

SM: A lot. Just look at what he did at Alabama.

31. Is Joel Stave the man under center for Wisconsin?

BY: He did throw for 22 touchdowns last season, tied for second in the Big Ten.

32. Will Ezekiel Elliott be an adequate replacement for Carlos Hyde in the Ohio State backfield?

SM: Yes. Although, that's not to say he's going to match Hyde's numbers.

33. Can Maryland be a dark-horse in the uber-competitive East Division?

BY: The schedule certainly isn't in its favor.

34. Will QB Devin Gardner take the next step in his development at Michigan?

SM: I think he will improve from 2013, but turnovers have always been the problem, and those aren't going to just disappear.

35. Which school will change starting quarterbacks first based on choice-not injury?

BY: Hmm, Purdue or Wisconsin.

36. Is Iowa OT Brandon Scherff the top offensive lineman in the nation?

SM: Yes. Did you see how strong this guy is? Watch here.

37. Is Stefon Diggs the top wideout in the Big Ten?

BY: He's electric and he's getting a lot of fanfare. Devin Funchess and Shane Wynn aren't bad, either.

38. How will the three new Iowa linebackers perform?

SM: They will have their ups and downs throughout the season. It's never easy to replace 1,000-plus combined tackles.

39. Will Northwestern pass more with Trevor Siemian at quarterback and Kain Colter gone?

BY: Yes. Siemian has a laser for an arm and isn't blessed with Kain Colter's legs.

40. Will the Ohio State at Michigan State game on Nov. 8 be a de facto East Division title tilt?

SM: Yes. Without a question.

41. If Braxton Miller gets hurt, does Ohio State have an adequate backup?

BY: One thing's for sure: They don't figure to have a Kenny Guiton-like fallback.

42. Which Big Ten newcomer is best equipped to succeed this fall: Rutgers or Maryland?

SM: I'm going to go with Maryland, if it can stay healthy. That has been an issue for this team.

43. Can Minnesota develop a passing game that defenses must respect?

BY: Respect? Maybe. But it doesn't figure to be one that strikes fear in opponents.

44. Can Nebraska?s Tommy Armstrong become a better passer to take advantage of a nice corps of receivers?

SM: Yes. With talented dual-threat quarterback Johnny Stanton waiting in the wings, he really has no choice.

45. Is Michigan Devin Funchess ready to be a star?

BY: Without a doubt. He's going to have a huge year.

46. With 17 starters back coming off a 5-7 team, is Northwestern being overlooked?

SM: Yes. They are my surprise pick this season. Don't be shocked if this team wins nine games.

47. Does any conference have a better collection of running backs?

48. Who is the best running back in the Big Ten?

SM: Ameer Abdullah. But, Melvin Gordon is a close second.

49. Will Illinois win more than one Big Ten game?

BY: Yes, but it might not be more than two. See schedule.

50. Will any team have a better kicker-punter tandem than Michigan State?s Michael Geiger-Mike Sadler?

SM: No. This duo is dominant on the field and on Twitter, especially @Sadler_3.