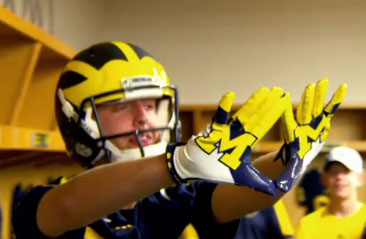 Our friends at ESPN always do terrific work with their "My Wish" series. Tuesday night's segment was extra special, though, because it featured diehard Michigan fan Stephen Loszewski, 18, who has acute lmyphoblastic leukemia (ALL). Loszewski's football career was cut short by the cancer, so Brady Hoke and company invited him to Ann Arbor for a recruiting visit.

Loszewski did it all. He met Brady Hoke, he played catch with Devin Gardner, he suited up in the locker room, he led the team out onto the field, and he broke down the team. There were surprise visits from Jake Long and Desmond Howard, to boot.

Watch the video below. Hope you have a tissue nearby.

Stephen?s football career was cut short by cancer. But now his #MyWish to become a @UMichfootball recruit comes true: http://t.co/XRcSUsiLio

And here are some pictures from the filming: