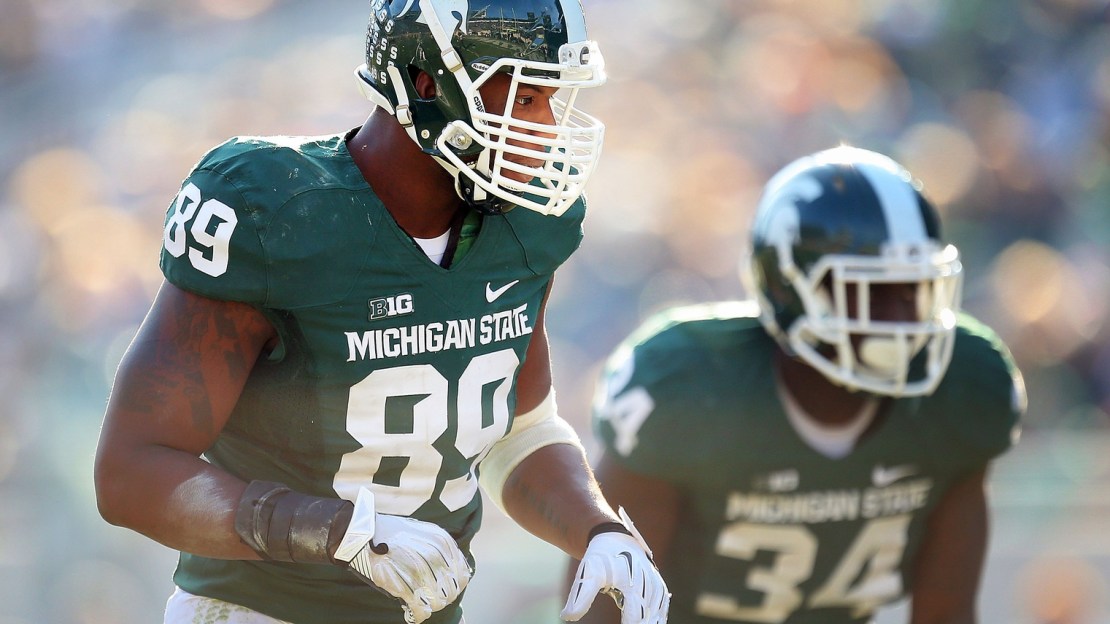 With Big Ten media days Monday and Tuesday, media members are busy predicting what the conference landscape may look like in the upcoming 2014 season. One thing is for certain: The Big Ten should be loaded with talent on defense. To that point, I was wondering which teams feature the best trios, when it comes to the three levels (line, linebacker and secondary)?

1. Michigan State: DE Shilique Calhoun, LB Taiwan Jones, S Kurtis Drummond
The conference's top defense returns five full-time starters this season. Calhoun is the reigning Big Ten Defensive Lineman of the Year, while Jones and Drummond should each record 75-plus tackles in 2014, assuming they both remain healthy. This is a unit that has a ton of talent from top to bottom, but it all starts with this impressive trio of stars.

2. Ohio State: DE Joey Bosa, LB Curtis Grant, CB Doran Grant
The Buckeyes ranked fifth in the conference in scoring defense last season, giving up just under 23 points per game. Much like MSU, Ohio State lost several defensive stars, but Urban Meyer's team returns a ton of talent, led by this trio. After a standout freshman campaign, Bosa could lead the conference in sacks, while Curtis Grant will be looked upon to be the new leader of this linebacking unit, and the same with Doran Grant in the secondary.

3. Penn State: DE Deion Barnes, LB Mike Hull, CB Jordan Lucas
Depth has been an ongoing issue for Penn State since the sanctions hit the program two years ago. Make no mistake, though, this defense returns a lot of talent. Barnes was a star in his freshman campaign, and if he can return to form, he should be a menace for opposing Big Ten quarterbacks. Hull is the leader of the defense after averaging a team-best 7.8 tackles per game last season. Lucas anchors a secondary that struggled at times last season, but look for that unit to show great improvement this year under new defensive coordinator Bob Shoop.

4. Nebraska: DE Randy Gregory, LB David Santos, S Corey Cooper
Had Gregory not been as dominant as he was last season, this spot may have gone elsewhere. But consider this: The 6-6 240-pound defensive end finished 2013 with 10.5 sacks, which was 2.5 more sacks than any other player in the Big Ten. He recorded at least one sack in seven of the Huskers final eight games, and had at least one tackle for loss in each of the team's final 12 games. Joining Gregory is Santos, a proven linebacker who ranked in the top-20 of the Big Ten in tackles last season, and Cooper, who will be looked at as the leader of this secondary after recording a team-high 91 tackles last year.

5. Michigan: DE Frank Clark, LB Jake Ryan, CB Blake Countess
Greg Mattison's defense allowed more than 30 points on five separate occasions last season, but it's tough to put that blame on these three returning stars. Clark is a guy who has improved every season and should be in for a big senior year. Ryan is the heart and soul of this defense, but he will be making the move to middle linebacker this season, which is a big move for a guy who started his college career as a rush end. Finally, Countess is the leader of this secondary and a guy who tied for the Big Ten lead in interceptions last season. All three of these guys could be first team All-Big Ten members.

6. Northwestern: DE Deonte Gibson, LB Chi Chi Ariguzo, S Ibraheim Campbell
Gibson will be looked upon to help fill the void left by defensive end Tyler Scott. Ariguzo, a senior, is one of the top returning linebackers in the conference. He recorded 106 tackles in 2013, which ranked sixth in the Big Ten, and tops amongst returning players, not including Rutgers' Steve Longa. Campbell has been a staple of this defense for three seasons now and should be in for a huge senior season. He has recorded eight interceptions and 262 tackles in three seasons at Northwestern. Those are All-Big Ten quality numbers.

7. Iowa: DT Carl Davis, LB Reggie Spearman, CB Desmond King
How do you replace more than 1,000 career tackles? That's the question the Hawkeyes must answer this season, after losing Christian Kirksey, Anthony Hitchens and James Morris to the NFL. Having a proven veteran anchoring the defensive line will help, as Davis should be looked at as the leader of this defense. The question remains at linebacker, where Spearman looks like a promising young talent. King had a promising freshman season and should be one of the top corners in the Big Ten this season.

8. Minnesota: DE Theiren Cockran, LB Damien Wilson, S Cedric Thompson
Cockran, a 6-6, 250 pound junior, is one of the most underrated players in the Big Ten, regardless of position. He is an exceptional pass rusher, recording 7.5 sacks and leading the conference with four forced fumbles in 2013. Wilson, the Gophers' senior middle linebacker, recorded 78 tackles last season and should be the leader of this defense. Thompson, a senior, will enter his third season as a starter in the Gophers' secondary. He led the team in tackles with 79 last season.

9. Maryland: DE Andre Monroe, LB Cole Farrand, S Sean Davis
Maryland is loaded with talent on the offensive side of the ball, but how will this defense adjust to the new style of play in the Big Ten? Leading the way is DE Andre Monroe, who was an absolute force off the end last season, racking up nine sacks and 17 tackles for loss. The linebacker group is led by Cole Farrand, who recorded 84 tackles in 2013. Davis is the leader of the secondary and could be an All-Big Ten performer this season. He had a team-high 103 tackles last season.

10. Rutgers: DT Darius Hamilton, LB Steve Longa, S Lorenzo Waters
Rutgers returns plenty of talent on defense, which is why some believe this team can make some noise in the Big Ten. Hamilton developed nicely last year and is the star on the defensive line. Sophomore Steve Longa is a tackling machine (123) and a guy who will be looked at to anchor this linebacking unit. Waters has recorded 60-plus tackles in two straight seasons and should do that again in 2014.

11. Wisconsin: NG Warren Herring, LB Derek Landisch, CB Sojourn Shelton
You will be hard-pressed to find a defense that lost as much talent as Wisconsin did. Dave Aranda's defense must find a way to replace its talented front seven. Herring (4 sacks, 6 tackles for loss) and Landisch (33 tackles) – Marcus Trotter, too – will be asked to help replace Beau Allen and Chris Borland's production, respectively. Shelton had a standout freshman year and should be one of the top corners in the conference.

12. Illinois: DT Austin Teitsma, LB Mason Monheim, CB V'Angelo Bentley
This is a defense that ranked 11th in the conference in total defense last season, giving up an average of 481.5 yards per game. The Illini lose top linebacker Jonathan Brown, but Monheim is a capable defender and should be the star of this front-seven. Teitsma is a returning starter who should help anchor the defensive line. Bentley is a speedy corner who could be in for a breakout junior season.

13. Purdue: DE Ryan Russell, LB Sean Robinson, CB Frankie Williams
Purdue struggled on both sides of the ball last season, but there is talent on this defense, and it starts up front with Russell. The senior defensive end had 35 tackles last season, with 5.5 for loss and two sacks. The linebackers are young, with Robinson, the converted quarterback, being the leader of the group. Williams is a talented corner who had some bright moments last season (61 tackles), despite the Boilers' struggles.

14. Indiana: DE Nick Mangieri, LB David Cooper, CB Tim Bennett
The good news is that the Hoosiers return 10 starters from last year's defense. The bad news is that this defense allowed a Big Ten-worst 38.8 points per game last season. Brian Knorr takes over as the Hoosiers' new defensive coordinator, and he will have to build this unit around Mangieri, Cooper and Bennett. Mangieri recorded three sacks last season, Cooper had a team-high 85 tackles, and Bennett, the senior leader of the secondary, posted 20 pass-breakups and 73 tackles.