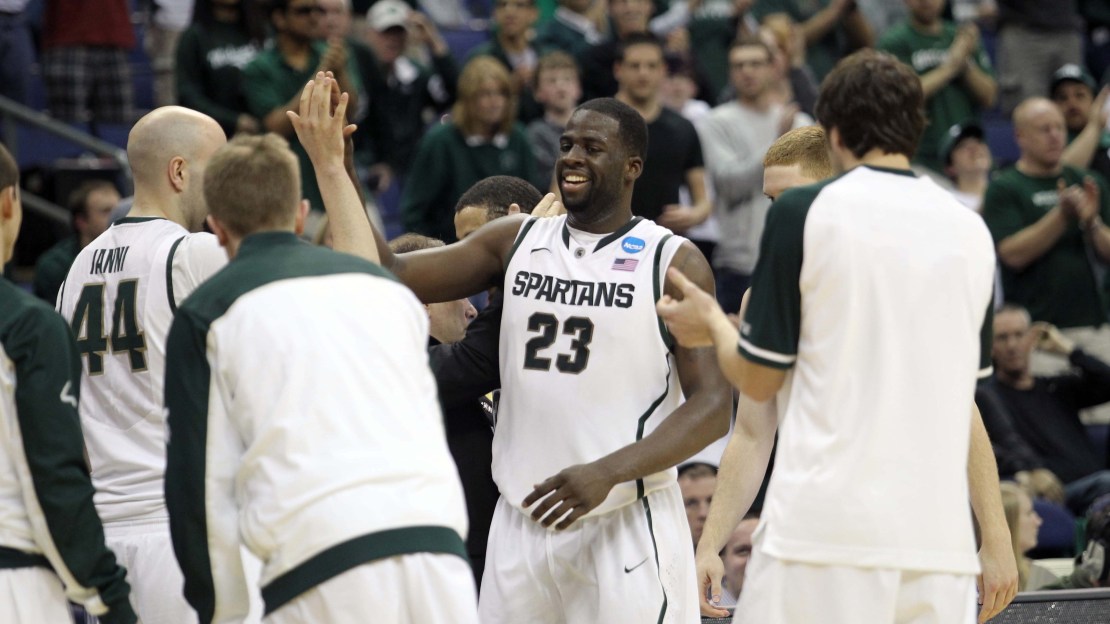 Incoming Michigan State freshman Lourawls Nairn already is having an impact. In fact, he may be the fastest Spartan ever. I can?t wait to watch this high-energy guy.

"You know, he's not a great shooter, but he can do a lot of other things really well," Tom Izzo said to Mlive.com.? Day Day (Draymond Green) told me I'd have to break tradition, he said 'I think you should name him a captain as a freshman.'

"Day Day says it excites him to play ball with him, and that's a helluva comment from a three-year (NBA) pro."

Jones makes a lot of sense: ?Of course, Bowlsby is technically correct. College athletes aren't employees because their "payment" consists of their grant in aid. What they really more resemble from a business standpoint is indentured servants, functionally no different than the desperate young European immigrants of the late 18th century, willing to work for free for a few years just to get room and board, some training in a trade and a shot at making some money somewhere down the line.

And Bowlsby, along with the other major-conference commissioners, the Disney and Fox executives and the head coaches, is one of the colonial land owners.

Everyone makes the money except the young men who produce the product. Great system, right? You'd try to protect it, too.?

The tidal wave of watch lists finally is over ? I think. Are there too many of the lists? Some Hawkeyes think so. And, honestly, I agree. Wholeheartedly.

To wit: Austin Blythe and Iowa teammates Brandon Scherff, a senior left tackle, and Carl Davis, a senior defensive tackle, are among 123 players from 76 universities on the Lombardi watch list. You read that correctly: one-hundred-and-twenty-three. Let that sink in for a moment. Not a really ?exclusive? watch list, huh?

Michigan State's offensive line has some work to do.

Mike Griffith of Mlive.com says to keep an eye on the right side of the front. There's plenty of potential there, but it doesn't quite measure up to the left side of the line and there will be ongoing competition at right guard and right tackle between Donavon Clark, Connor Kruse and Kodi Kieler that could spill over from fall drills and into the regular season.

When it comes to the best games of 2013, ESPNU think the Ohio State at Michigan game rated among the five best. Hard to argue against that.

James Franklin has his work cut out for him. That?s OK. Franklin doesn?t fear work. He knows challenges loom and embraces it. And, really, Franklin is good at playing the underdog role, which may be the fate for PSU this fall.

?From being raised in a single-parent home to 12 coaching stops in two decades, Franklin cannot be accused of taking the easy way out. Just like he was at Vanderbilt - and damn near everywhere else — Franklin may be the perfect David to fight the Goliaths of a monolithic conference in a sport of colossals. (And tick off a lot of them in the process.)? Credit Malcolm Gladwell with coming up with the theory. It?s perfect.

Minnesota lost an icon with the passing of Bob McNamara.

Good video here of Omaha World-Herald writer Jon Nyatawa talking many things, including the Big Ten West race. I think it?s gonna be wild. Iowa, Nebraska and Wisconsin look to be favs. But don?t count out Minnesota and Northwestern from making noise and possibly being factors.

Kevin Trahan of InsideNU.com asks an interesting question: Do you prefer Cardiac Cats or predictability?

He points out that while there are exceptions, there are two general trends in Northwestern football over the past two years:

1. The talent has gotten a lot better. There is no disputing that.
2. The coaching and the game plans have gotten more conservative.

Typically, when you have better players, there is no reason to get exotic with your schemes or play calls. You can out talent foes. Bottom line: This is going to be an interesting season.

Another good podcast from the gang at the Cedar Rapids Gazette.

The ?On Iowa? podcast with Marc Morehouse and Scott Dochterman breaks down the likely topics at Big Ten media days, the potential for real spring college football and the happenings around Iowa basketball. –