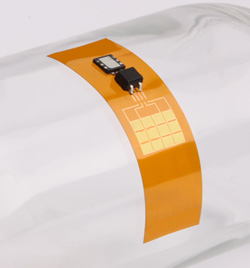 The human heart is one of the most incredible natural phenomena in existence. The ways in which it powers various functions of the human body is one of the great wonders of life. Yonggang Huang and John Rogers, professors at Northwestern University and the University of Illinois, respectively, have spent much of their careers studying this amazing organ.

Recently, the two professors combined their experience and expertise to create a tiny device that can harvest energy from the human heart, which can then be used to power other devices like pacemakers that help keep the body operating properly. Huang and Rogers started working together when Huang was at the University of Illinois, and their partnership continued when the former joined the faculty at Northwestern University. Together, they have published more than 150 academic papers, ?one of the most productive collaborations in physicals sciences of all time,? Rogers said.

?I can?t verify that, but I don?t know of anybody else who has had that kind of sustained high output in collaboration before,? he added.

With Huang concentrating on the mechanics of structure and materials and Rogers working on the bio-engineering side, the two combined their efforts with Marvin H. Slepian, a cardiologist at the University of Arizona, whom Rogers said came up with the idea of creating the heart energy-harvester.

?He is intimately familiar with pacemaker technology, and he highlighted to us there was this opportunity, because pacemaker batteries have a finite lifetime and replacing them is a pretty invasive procedure,? Rogers said. ?If you can either eliminate the need for the battery entirely or extend their lifetime, that will be an important outcome.?

With the help of students at all three campuses, Huang and Rogers developed the device - a tiny, flexible electronic piece that harvests about one-millionth of the power of the beating heart and can transfer that energy to a device that requires electrical pulses to operate. The same mechanism can be used on the lung and diaphragm, which also produce power to operate body functions. The device can produce enough energy to power a 3.8 volt battery.

So far, the device has been tested on animals at the University of Arizona. Its practical application in humans is years away, Rogers said. ?It will require more study with much longer-term viability tests so we can track over a period of a couple of years to see what exactly happens over time.?

In its application, the device is mounted onto the heart and connected to a pacemaker or similar device with tiny, flexible wiring. There is also a battery, smaller than the one currently used to power a pacemaker, which stores the power when it is not in use. In some applications, the battery is unnecessary.

While the heart produces more power than the lungs or diaphragm, it?s a more delicate organ that either of those two and is more affected by foreign matter. While the device is designed to be non-evasive, Rogers said the lung and diaphragm are more likely to be able to handle the connection, and in some cases will be the more likely spot to have it attached depending on the overall health of the patient.

?The devices are like thin pieces of paper in terms of thickness,?? Rogers said. ?You want the device to be so thin and flexible that it is imperceptible as far as the heart is concerned. If it is too big or too rigid, it might be able to generate more power but it might initiate an arrhythmia in the heart.?

Rogers said the device?s performance has no effect on the heart itself because of the microscopic percentage of energy it is harvesting. ?That was a critically important design aspect,?? he said.

The paper Huang and Rogers produced along with the device itself could not have been completed without the help of students at both Northwestern and Illinois, as well as those who did the animal testing at the University of Arizona.

?The students are the ones who do almost all the work,?? Rogers said. ?The faculty are in advisory and management roles, serving as mentors to its students who make the device, integrate it into the animals and do the evaluations. It is a student-driven project.?