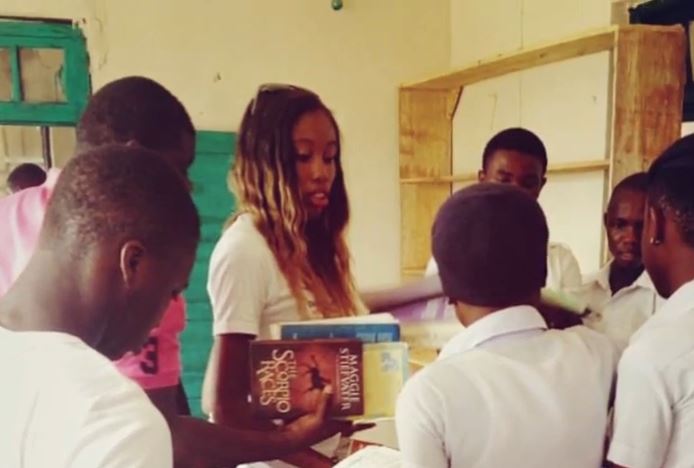 When terrorist group Boko Haram kidnapped hundreds of school girls in Nigeria in May of this year, it made headlines around the world and sparked a grassroots social media campaign that centered around the Twitter hashtag #BringBackOurGirls. For University of Maryland student Jennifer Soba Pearse, the news hit close to home - figuratively and literally.

Pearse, who was born in the United States but raised by her parents in Nigeria, had kick-started the Em-Powerment Project last fall to provide books to school children in that country.

In November 2013, she and other Nigerian students at UMD gathered more than 700 books to send to Pearse?s mother?s native village of Umu Agbai. During winter break, the students traveled to Nigeria to create the community?s first library.

But when the Boko Haram story broke, Pearse and her initiative took a new direction. ?Our original focus was providing an opportunity for Nigerian girls to be socially active and become active members of the society,? she said. ?Once that thing happened, we changed our focus to be more of an information platform.?

Today, the Em-Powerment Project Web site shares details on events around the country in support of the Nigerian girls. Pearse also organized a rally for the cause at the Lincoln Memorial in Washington, and she?s appeared on MSNBC and other national news networks to talk about the issues of the Nigerian society and press the need for international involvement in this specific incident.

Helping out others in need is not new for Pearse. Her first foray, part of a service program at the University of Maryland, took her to a Lakota reservation in South Dakota. She eventually became a peer leader in the school?s Alternative Breaks (AB) program, and joined the school?s Peer Leadership Council. From there, she turned her efforts toward make a difference in her home country.

Since undertaking the organization and follow-through of the Em-Powerment Project, Pearse?s life has changed dramatically. For one thing, because news breaks around the clock, Pearse does not sleep a great deal. In fact, when waiting to go on air for a national television appearance, she fell asleep in the waiting room while trying to get some studying done.

?My parents are really scared for me,? Pearse said with a laugh. ?But I can sleep later.?

For the time being, she has no plans to slow down. In addition to her efforts with the Em-Powerment Project, Pearse just returned from China for a study-abroad course in rural development, and she plans to take one more trip to South Dakota to work with the Lakota before graduation. After that, she wants to use her degree in global development and diplomacy to work ?where I am needed.?

Pearse said she will maintain the Web site and organization she created, because she has become aware of the power of social media to provide information that might otherwise simply not be known.

?I will never take social media for granted,?? Pearse said. ?Without it, I doubt anyone in the world would care about this issue. With the power of social media, you get to hear about the stories, see the videos posted on my sites, you hear from strangers and celebrities, and hear about the work of other foundations.?