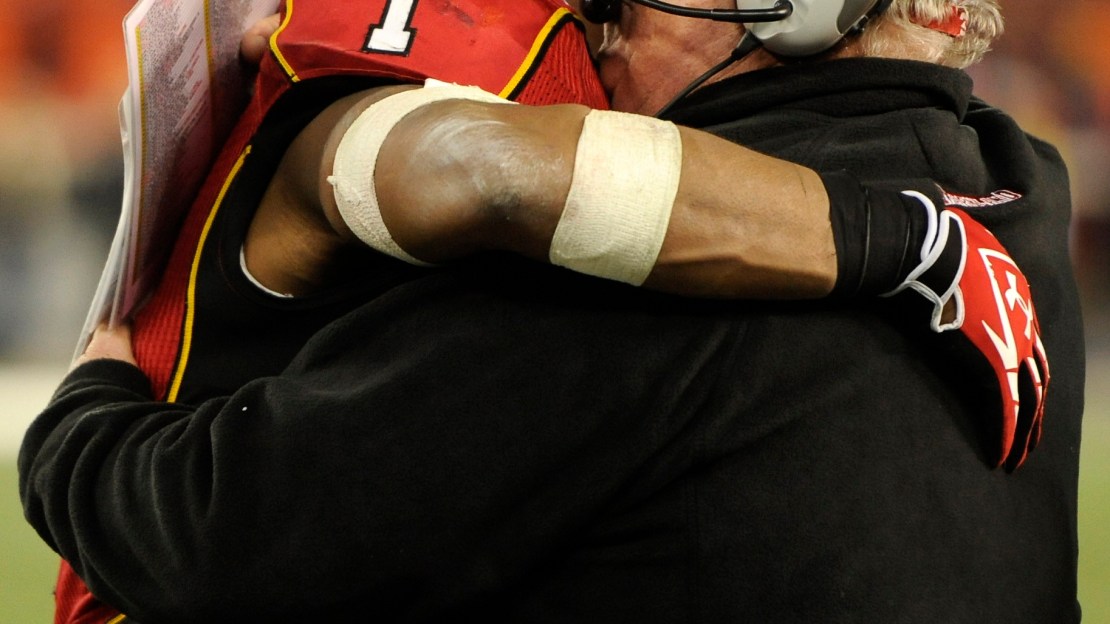 Rutgers coach Kyle Flood?s most vital recruit in the offseason may not have been any player. Rather, it may have been luring Ralph Friedgen out of retirement.

Friedgen brings a wealth of experience to Rutgers, where he will be the fifth offensive coordinator in five years. ?The Fridge? sat out the past three seasons following a successful 10-year run at Maryland that included an ACC title and Orange Bowl appearance in 2001.

Friedgen also has coordinated offenses at places like Georgia Tech, when it won a share of the 1990 national title, and with the San Diego Chargers, when they made a run to Super Bowl 29.

I caught up with the 67-year-old Friedgen to get his views on the Scarlet Knights? offense that has nine starters back.

Q: Why Rutgers?
A: (Kyle Flood) caught me by surprise. Kyle had called me last year, my wife was having a medical situation and she was convalescing at my daughter?s house in Maryland. He had a headhunter call me; I said I may be interested in (being OC). My daughter was getting married on Oct. 5. I told the headhunter to not call then because I had too much money sunk in the wedding. He called anyway and we had a nice talk. I know Rutgers offered the coordinator job to at least one other person before me. They called me on a Friday night at about 10 o?clock. I said I may have interest and he wanted me on a plane the next day to check it out. I visited, and I was amazed at how good the facilities were.

I had never met anyone on the staff and had never met Kyle. I didn?t know anyone. My wife talked me into taking the job. I?m enjoying it. There are good and bad days, but Rutgers is treating me very well. I enjoy working for Kyle. He?s a very optimistic, hard-working coach and a good person.

Q: What did you do the last three years while away from the game?
A: I played a lot of golf. I fished a lot. I read a lot. I watched college football a lot. I enjoyed myself, if you wanna know the truth.

Q: What did you miss?
A: I missed the interaction with the players. Not just on the field, but off the field, too. That always has been the hook for me as a coach. I also missed the relationships with the coaches and the players? families, too. I have gotten close to a lot of players. When I came back, I was surprised so many people reached out to me with emails, texts, calls, letters to say how happy they were that I was back. I must have touched a lot of people. I was surprised.

Q: Did you consult or visit with coaches while away from the game?
A: I did a clinic at South Carolina. I worked some on ESPN3. I interviewed with Will Muschamp for the Florida offensive coordinator job; didn?t get it. He had called me a couple times and told me to come down for two-a-days. George O?Leary wanted me to (come to two-a-days at UCF). I talked to Bill O?Brien at one point about going to Penn State. This spring, Kyle Flood and I went to see Bill with the Houston Texans for OTAs. That was good.

Q: What impressed you in the spring?
A: I had so many players out in the spring. (TE) Tyler Kroft didn?t participate in the spring, (RB) Paul James didn?t, (RB Justin) Goodwin got hurt the first week of spring and (RB) Shavon Huggins had an operation in the spring. Those are some skill players who I think will add a lot to our offense. And on top of that, we had a couple of linemen we missed for most of the spring, too. I was kinda dealing with half a deck. But overall, I was encouraged. I think our kids are working hard. I think we have a chance to have a good offense. We will see when all of the cards come together.

Q: Is the quarterback situation settled?
A: Gary Nova, to me, is the quarterback. He had a tough year last year. He lost his position. I think he threw 10 interceptions in three games. I didn?t see that this spring. I thought he had a good spring and has a chance to be a good quarterback. He has a good arm; he doesn?t have a great arm. He has very good vision. It has been my experience that when quarterbacks can see things, then they have a chance to be pretty good.

Q: Is the depth at running back as good as I think it is?
A: We do have some guys. Desmon Peoples was the third-team running back last year and he mainly was the running back in spring practice. He really had an excellent spring. He?s not a really big kid. I was very impressed with his pass protection. He?s very elusive and has good speed. He made some sensational runs in spring practice. Paul James and Goodwin are back, and I hear we have a couple of good ones (Josh Hicks is one) coming in, too. We have a lot of good running backs and I will do what I can to get them all in the game.

Q: Who will catch passes?
A: Leonte Carroo was a very good receiver for them last year. He had a concussion so he didn?t have any contact in the spring. But he did go through seven-on-sevens. He can go up and get the ball. It was amazing how if you throw it up and give him a chance to catch it, he will. He has good speed, not great speed. But he?s a physical kid. When you see him, he?s a strong-looking individual. He?s gonna be good. Janarion Grant was our slot receiver and had some big kickoff return returns last year and played well in the spring. And we have a transfer from Kansas named Andrew Turzilli who I hope will figure in. We won?t be deep at receiver, but we will have some talent that can make some plays.

Q: How would you describe you offense?
A: I?d like to run some option, but I don?t know if we have the guys who can run it. I don?t believe in putting a square peg in a round hole. I try to utilize the personnel that we have, and I try to do some things I think we can do from a line standpoint. We are in a tough conference and have one of the tougher schedules in the country. So, we have to keep people healthy, too.

Q: Will this be a run or pass team?
A: I always wanna have both. If you are one-dimensional, they will take that away from you and we will have trouble moving the ball. You have to be able to run and throw it. And take what the defense gives you.

Q: At one time, James Franklin was the offensive coordinator on your staff at Maryland and the head-coach-in-waiting. Do you have a relationship with him?
A: Not that much, no.

Q: What?s intriguing about coaching in the Big Ten?
A: I think it?s going to be a challenge. I think it?s great for Rutgers and the Big Ten to get the exposure in the New York metropolitan area. If we can do well, it will be a very good situation for Rutgers because there is a lot of good talent in this state.

They are very excited about it. The facilities are good. They plan on building a new building. They want to compete in the Big Ten and are willing to do what they have to do.