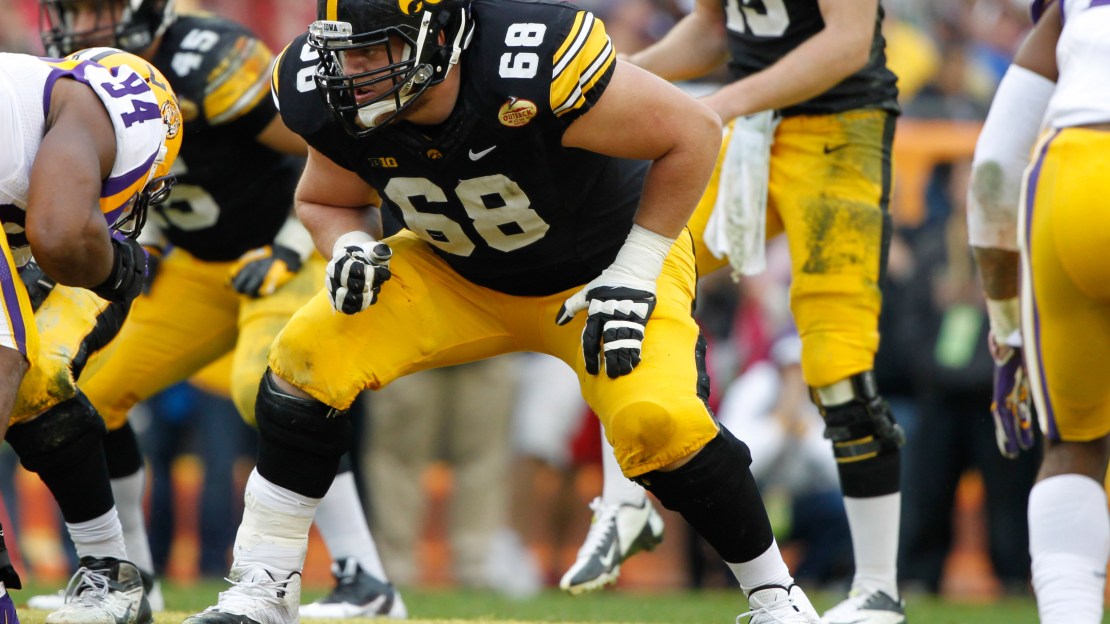 Mike Huguenin of NFL.com has ranked the QB situation for every FBS team. Yes, he?s a walking college sports encyclopedia. Believe me.

As you would suspect, the Big Ten has some good QB situations, with Michigan State and Penn State ranking among the best. I also like the situation at Illinois.

Nice piece here on Iowa?s offensive and defensive lines. Will any Big Ten squad have a better trench combination than the Hawkeyes? I don?t think so. And this bodes well for Iowa and is a big reason why I think the Hawkeyes are in store for a big season.

The d-line has all four starters back, led by Carl Davis, Drew Ott and Louis Trinca-Pasat. The o-line is anchored by Brandon Scherff, who could be the No. 1 pick in the 2015 NFL Draft. Yes, I just typed that.

NFL.com?s Mike Huguenin thinks that ?Even if (Scherff) doesn?t go first overall, he seems a lock to become the fourth Iowa offensive lineman to go in the first round since 2004 (joining Robert Gallery, Bryan Bulaga and Riley Reiff).

Still not impressed with Scherff? Turns out he is considered to be the nation?s No. 2 freakiest athlete. He was once a prep quarterback.

The SEC has endured a big talent drain at quarterback, having lost seven of its top eight starting quarterbacks from last season in terms of pass efficiency (all but Auburn's Nick Marshall) and passing yards (all but Ole Miss' Bo Wallace). Could this mean the mighty SEC is ready to take a tumble from its perch as the country's best conference?

If so, the Big Ten has a pretty good collection of signal-callers coming back in Braxton Miller, Christian Hackenberg, Connor Cook, Devin Gardner and Nate Sudfeld, among others. Something to keep an eye on.

Yes, Connor Cook is on the Davey O?Brien watch list. It?s quite an ascent from this time last year, when Cook largely was an unknown commodity who was behind Andrew Maxwell. Just because he seemingly has ?arrived? after earning Big Ten title game and Rose Bowl MVP honors doesn?t mean that Cook isn?t still motivated. To the contrary. Perhaps at the top of his to-do list is to improve his completion percentage, which was 58.6 percent last year. I?m not betting against him.

It looks like Illinois has its man for the offensive line job: Tom Brattan. A nice hirer, especially under these circumstances so late in the calendar. He served as Maryland's offensive line coach from 2001 until 2013 before Randy Edsall did not renew his contract. Brattan, who will turn 64 on Oct. 14, previously coached at Stanford for two seasons in 1999 and 2000 as the Cardinal's offensive line coach after working from 1992 until 1998 as Northwestern's o-line coach.

When Penn State assembles for two-a-days, a different experience looms.

Michigan has finalized its non-con hoops schedule for 2014-15. And, it has some nice clashes for a Wolverines? program that?s in a bit of a transition after losing some top talent.

Games vs. Arizona, Syracuse and SMU are among the challenges. And possible games with Oregon, VCU and Villanova loom. I?m ready for some basketball!