One game a week, it's our expert's Ultimate B1G trip 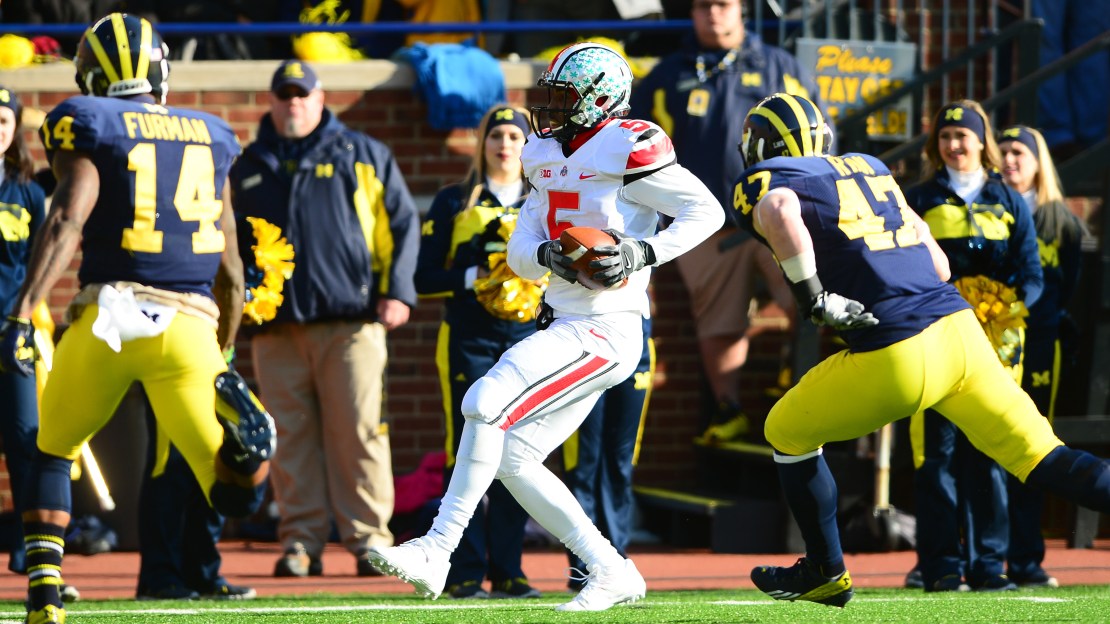 If time and money weren?t objectives, what Big Ten games would you go to this season? I have built the ultimate 2014 Big Ten schedule, dialing in the game you would need to be at each week. Call it "football nirvana." See my weekly picks in this post.

WEEK 1: WISCONSIN vs. LSU (in Houston). This will be played on the grand stage of Reliant Stadium, giving the Badgers a chance to show if their rebuilt defense is up to the task. LSU had a national-high nine NFL draft picks in May. Still, talent looms for the Bayou Bengals, as the Badgers will be pushed to their athletic limits. What a litmus test. LSU capped a 10-3 season in 2013 by beating Iowa in the Outback Bowl. The Tigers will be breaking in a new quarterback. This should be a good old-fashioned smash-mouth game. Melvin Gordon will need to run well vs. a LSU defense that is breaking in two new tackles and outside linebackers. Wisconsin is 0-2 all-time vs. LSU, falling in 1971 and 1972 in a home-and-home series.

WEEK 2: MICHIGAN STATE at OREGON. The Spartans? visit to Eugene shapes up as one of the nation?s top non-conference games. Autzen Stadium is a deafening cauldron for opponents. And the Ducks? offense comes at foes in waves behind QB Marcus Mariota. Can a MSU defense with five new starters hold its ground? The schools most recently met in 1998-1999, as each team won on its own turf in battles between Mike Bellotti and Nick Saban.

WEEK 3: NEBRASKA at FRESNO STATE. Bulldog Stadium is an intimating venue for one of the most underrated and passionate fan bases in the nation. They love their Bulldogs in the ?Valley.? Tim DeRuyter showed his coaching mettle last year in forging an 11-3 mark. Even better and scarier for NU fans: DeRuyter is 13-0 in Bulldog Stadium in his first two years. The Bulldogs play at a quick pace on offense and are uber aggressive on defense, a unit with experience. Again, the key will be QB with star Derek Carr gone. Who will it be: Brian Burrell, Myles Carr, or Zack Greenlee?

WEEK 4: MIAMI (FLA.) at NEBRASKA. Who can forget the epic showdowns between these schools in the 1984 and 1995 Orange Bowls? No, these aren?t Jimmy Johnson?s, Dennis Erickson?s or Butch Davis? Hurricanes, but Miami has some top-end talent and will be a good test for a Nebraska club coming off a 9-4 mark. The teams last met in the Rose Bowl for the national title after the 2001 season, which the Canes won, 37-14, over Eric Crouch?s Huskers. The Canes? have the makings of a good offense if the quarterback spot develops in what will be a good test for what looks to be a good defense for Nebraska, which needs to defend its turf.

WEEK 5: MINNESOTA at MICHIGAN. The Little Brown Jug is one of the sport?s most famous trophies. This year?s meeting seemingly is a tale of programs trending in opposite directions. The Wolverines have dominated this series, going 39-3 in the last 42 meetings. The Golden Gophers? lone wins in that stretch have come in 1977, 1986 and 2005. Still, Minnesota is a program on the rise under Jerry Kill and is coming off consecutive bowl trips. Conversely, Michigan is struggling under Brady Hoke, coming off a disappointing 7-6 season that has some wondering about the direction of a program that has seen its win total drop each of the last three seasons.

WEEK 6: NEBRASKA at MICHIGAN STATE. This could be a preview of the Big Ten championship game. And, I?d be OK with that. The Cornhuskers won the last time they visited East Lansing, taking a 28-24 decision in 2012. Michigan State beat Nebraska for the first time ever last season when it took a 41-28 decision in Lincoln. It was MSU?s first win ever vs. Nebraska. This game should feature lots of good defense. Which offense can step up?

WEEK 7: PENN STATE at MICHIGAN. This will be just the third night game at Michigan Stadium, and the first in Big Ten play. Kind of cool, right? The Wolverines must dispatch the visiting Nittany Lions and new coach James Franklin, which would end a four-game losing skid in the series. Before that, Michigan won nine in a row vs. Penn State. Plus, a win vs. PSU would give the Wolverines some mojo as they enter the toughest part of their schedule. The Nittany Lions won a wild four-overtime game vs. the Wolverines last season in State College.

[ MORE: Best of Week 7: Penn State vs. Michigan, under the lights ]

WEEK 8: NEBRASKA at NORTHWESTERN. The Huskers should be favored. And if the last three games are any indication, this clash should be memorable. The Wildcats took a 28-25 win in Lincoln in 2011; the Cornhuskers returned the favor in 2012 with a stirring 29-28 comeback in Evanston; and last year, Nebraska won on a last-second Hail Mary. No doubt, Northwestern doesn?t fear the Huskers and has lots of talent back from a team motivated to rebound from a disappointing 2013 that began with the promise of a 4-0 start but melted into a 5-7 reality.

WEEK 9: MICHIGAN at MICHIGAN STATE. In a scheduling oddity, the Wolverines have to travel to East Lansing for a second season in a row. Michigan was absolutely embarrassed in Spartan Stadium last fall, losing 29-6. The Wolverines had 168 yards of total offense with a school single-game record low minus-48 yards rushing on 29 carries with seven sacks. The Wolverines have lost five of the last six meetings and haven?t won in East Lansing since 2007. The momentum in this fierce rivalry has changed dramatically. Seems like that ?little brother? crack made by Michigan running back Mike Hart happened YEARS ago, doesn?t it?

WEEK 10: NORTHWESTERN at IOWA. This could be a huge game in the Big Ten West race. And it could be a great chance for the Wildcats to show last year was an aberration. NU has lost its last two junkets to Iowa City, getting beat there 17-10 last season. This is a loaded Hawkeyes team that will be tough to top in Kinnick Stadium. Can Northwestern match Iowa?s strength in the trenches? A NU win could stamp it a legit contender in the wide-open West.

WEEK 11: OHIO STATE at MICHIGAN STATE. Ohio State?s visit to Michigan State could be a de facto Big Ten East title tilt. If it isn?t, it will be a big surprise. The Buckeyes won 17-16 the last time they visited Spartan Stadium in 2012. But Michigan State took the last meeting, dumping Ohio State 34-24 in the 2013 Big Ten championship game to end the Buckeyes? 24-game winning streak and national title hopes. The Spartans have won two of the last three meetings after losing seven in a row to the Buckeyes. Gotta love the QB clash between Braxton Miller and Connor Cook.

WEEK 12: NEBRASKA at WISCONSIN. The Cornhuskers could leave Madison with a win when they visit in the first of three season-ending games that figure to define the Badgers? season. Nebraska has to be thinking payback after getting whipped 70-31 by Wisconsin in the 2012 Big Ten championship game. And the Cornhuskers were embarrassed 48-17 in their last trip to Madison in 2011. This tilt will feature two top backs in Ameer Abdullah and Melvin Gordon. Who is better?

WEEK 13: WISCONSIN at IOWA. Iowa needs to take care of business when Wisconsin comes to Kinnick Stadium. The Badgers have been a Big Ten bad boy in recent years. To be the best, you have to beat the program that has been the best. Gary Andersen?s second team may be vulnerable, with some big issues along the front seven on defense. And who will catch passes? Is Joel Stave really the answer at quarterback? Iowa needs to show Wisconsin who is boss if it wants to win the West.

WEEK 14: MICHIGAN at OHIO STATE. Michigan could win at Ohio State. It?s a rivalry game. And, we all know what can happen in those. Plus, Brady Hoke may be coaching for his job. Still, the Buckeyes have dominated this series of late, going 11-2 vs. the Wolverines in the last 13 meetings. When did Michigan last win in Columbus? It was the 2000 season, when John Cooper was the Ohio State coach.