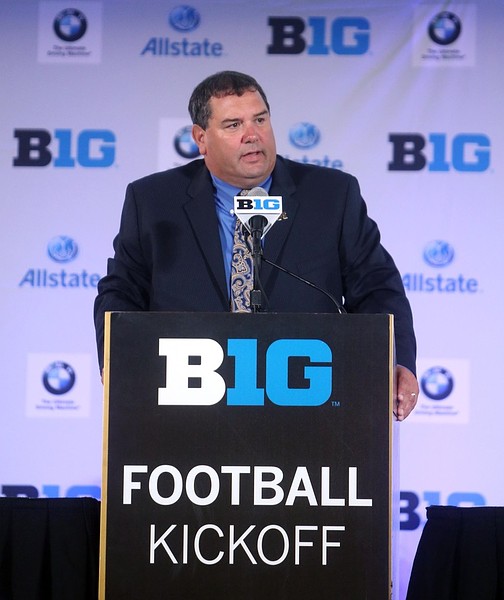 The Big Ten will begin gearing up for the college football season on July 28-29 with the Big Ten Media Days and Kickoff Luncheon at the Hilton Hotel in downtown Chicago. The annual event features coaches and players from all 14 Big Ten schools and will mark the first official appearance of Maryland and Rutgers as members of the Big Ten.

The event is a chance for media members to gather and ask questions to players and coaches in preparation for the upcoming season.

1. To Michigan State coach Mark Dantonio: How do you build on your success in 2013 and improve from a season that included a 13-1 record, a Big Ten championship, and a Rose Bowl victory?

2. To Maryland coach Randy Edsall and Rutgers coach Kyle Flood: What will be the biggest challenge your team faces with making the move to the Big Ten conference?

3. To Michigan coach Brady Hoke: What major changes can we expect to see from this offense in 2014 with new OC Doug Nussmeier in place now, and do those changes include incoming freshman phenom Jabrill Peppers?

4. To Penn State coach James Franklin: Penn State still has limited scholarships, is still unable to play in a postseason bowl game, and must find a way to replace one of the top wide receivers (Allen Robinson) in the Big Ten in recent memory. With all of that in mind, what is the biggest challenge you will face in your first year?

5. To Ohio State quarterback Braxton Miller: You are a two-time Big Ten Player of the Year. You have been a part of a team that ran off 24 straight victories. But, you have not won a Big Ten championship. How important is it for you to add that to your resume before leaving Ohio State?

6. To Indiana coach Kevin Wilson: This team threw the ball an average of 40 times per game last season, and that was with a dual-threat quarterback, Tre Roberson, in the mix. Does the loss of Roberson mean that this team will air it out even more in 2014, and does Nate Sudfeld taking over the full-time gig change the play calling?

7. To Wisconsin running back Melvin Gordon: Last season, you had a breakout year, all while sharing carries with both James White and Corey Clement. The year before that, you shared carries with White and Montee Ball. We know what you and Corey are capable of, but who is an under-the-radar, third tailback we should be looking for who could possibly work his way into the rotation this season?

8. To Nebraska coach Bo Pelini: Do you have any plans to implement the cat into any of your team's pregame rituals this season?

9. To Northwestern coach Pat Fitzgerald: There has been so much press and media hype surrounding your school and the recent unionization efforts facing college athletics. How do you put that behind you and make it a point to just focus on your team's play out on the field?

10. To Iowa coach Kirk Ferentz: Your team has a player (Brandon Scherff) who many consider to be the most dominant left tackle in the game since Joe Thomas (Wisconsin) and Jake Long (Michigan) played in the Big Ten back in the early-to-mid 2000s. How do you plan to utilize a guy like that and make sure his skill-set is put to full use in your offense in 2014?

We also asked Big Ten fans for questions they'd like to ask a Big Ten coach. See a few of our favorites below.

@bigtennetwork To James Franklin: "It's been a month since your last commitment. Have you lost your touch?"