Bill Cubit Q&A: 'We have a chance to be good' 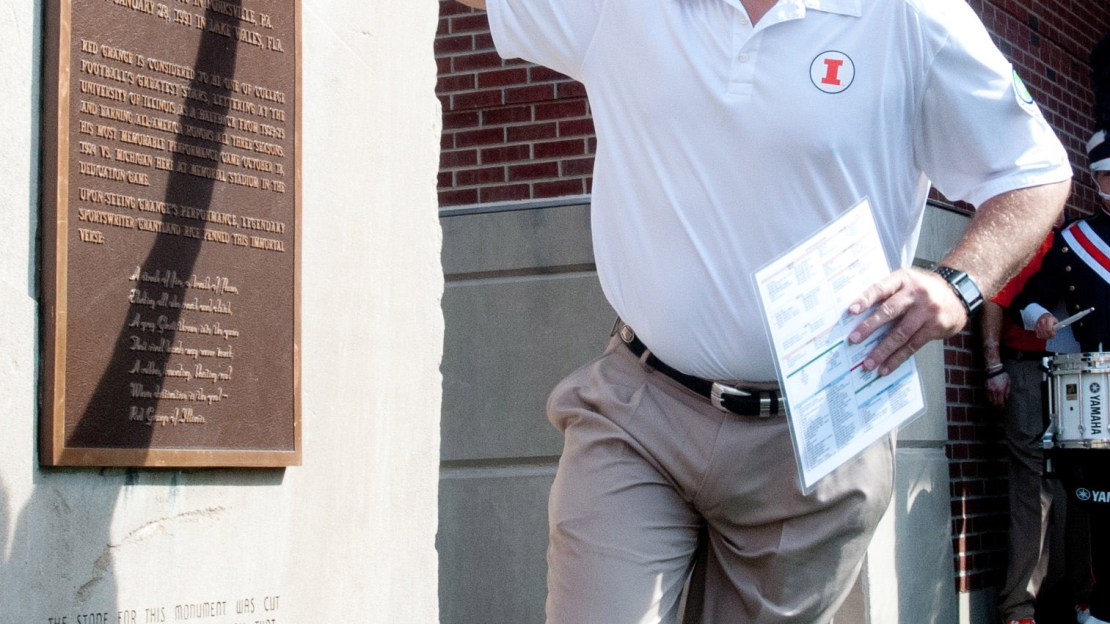 As Year Three of the Tim Beckman era dawns at Illinois, progress has been slow but tangible. The Fighting Illini went 0-8 in the Big Ten in 2012; they won a conference game last season and generally were more competitive. Why? The offense improved-a lot.

Cubit runs a fast-acting offense that relies on quick reads and quick passes. And he has the weapons to make it go in 2014.

I caught up with the sage Cubit to get his thoughts on his attack.

Q: How good could this offense be in the fall?
A: I think we have a chance to be good. When I got here, the kids on offense were beat down. Now they have a little bit of confidence. Our right tackle is a big question mark. Austin Schmidt played a lot for us last season because we could only play Corey Lewis 40 snaps a game. Christian DiLauro is the other guy at right tackle.

Q: How do the running backs look?
A: I think Fergie (Josh Ferguson) is one of the top three or four backs in the league with everything he does for us. But there were three games at the end of last season he wasn?t there for us. We ask a lot from him. He can get worn down. We need more from Nos. 2 and 3 tailbacks. Fergie can?t always hold up.

Q: Is the quarterback situation as good as I think it is, especially Wes Lunt?
A: I think the quarterback (Lunt) is really good. Wes needs a ton of reps. But I think we could be pretty good at the position. Our screen game was as good as I have had in my career. But watching tape, people started to pick up our screen-game schemes and used them (in their offense). People have seen more of it. They will have more on tape of teams that ran some of our stuff.

Q: Is the quarterback job open?
A: They all talked about the stats from Lunt?s spring game. But if three passes that hit guys in the chest aren?t dropped, his numbers look pretty good. He made some throws that are really big-time throws. The back-shoulder throw ? the field throws ? the comeback to the wide side of the field. That?s important. If you can?t do that, then those corners on the weak side will play between the two receivers and give you that throw if you can?t take it. Well, this kid can take it. He?ll spread out defenses. He?s really intelligent and really smart. But he needs a lot of reps. He was hurt a lot at Okie State. Didn?t do much in the spring (of 2013). Comes here and is on the scout team (last year). And in the spring, all the reps were equal. With more reps, he?ll be fine.

Q: Who does Lunt remind you of?
A: Body-type-wise, Tom Brady. He has added weight, weighing about 228 now. He has a calm demeanor until someone screws up. Then he is more forceful. He has a good presence about him. I had Trent Edwards at Stanford. I think this kid is a bit ahead of where Trent was when I was there.

Q: Will Aaron Bailey stay at quarterback?
A: He wants to play quarterback. We have to try to keep getting him better. He runs all the protections, all the run-game stuff, knows the check system and matchups. But he came from a high school that hardly threw the ball, so he has a lot of catching up to do. He has arm strength. It?s the decision-making process where he has to learn how to get rid of the ball on time. It takes a lot of reps. Reilly (O?Toole) and Wes have been in that type of offense in high school, they have a better feel for it.

Q: How do the pass-catchers look?
A: I think the Geronimo Allison kid is pretty good. (Tight end Jon) Davis has a lot talent but wasn?t there in the spring. That kinda hurt him. He is a really good player but he has so many injuries we have to be careful. Justin Hardee is key. If we are really good, he?ll help us. If he doesn?t, I still think we?ll be good. (Freshman) Malik Turner is really talented. We?ll see how fast he can get there. Talent-wise, I think we?ll be better at wideout. I don?t know if we?ll be as productive.

Q: Who needs to step up?
A: At running back, Donovonn Young has to start playing. He?s trying to be a back he isn?t. He is a big, physical kid. Really good weight room numbers. But he doesn?t run like that. He?s making all these moves and he isn?t that type of guy. I thought Devin Church had a nice spring and will surprise some people. He?s really dedicated. He has it figured out. I think he has a chance. He is more of a Fergie-type runner.

Q: How does the line look?
A: We are really thin. The left tackle Simon Cvijanovic could be an all-league-mention guy. It all depends on the right tackle. If we get one of two young guys to step up, we will be OK. I think DiLauro has some ability. He redshirted last year. Austin Schmidt played as a true freshman last year. DiLauro is more athletic but had a shoulder issue in the fall and he redshirted. With Cvijanovic, DiLauro and Schmidt, we would then have three tackles, which is what you want. And with (Michael) Heitz, (Alex) Hill, (Joe) Spencer and (Teddy) Karras, we like our guys inside.

Q: You recently lost line coach A.J. Ricker to Missouri, his alma mater. When do you expect to hire a replacement?
A: Probably by Wednesday or Thursday. I have been surprised by the number and quality of people interested. We will hire a good one. And our offense will stay on track. We?ll be fine.