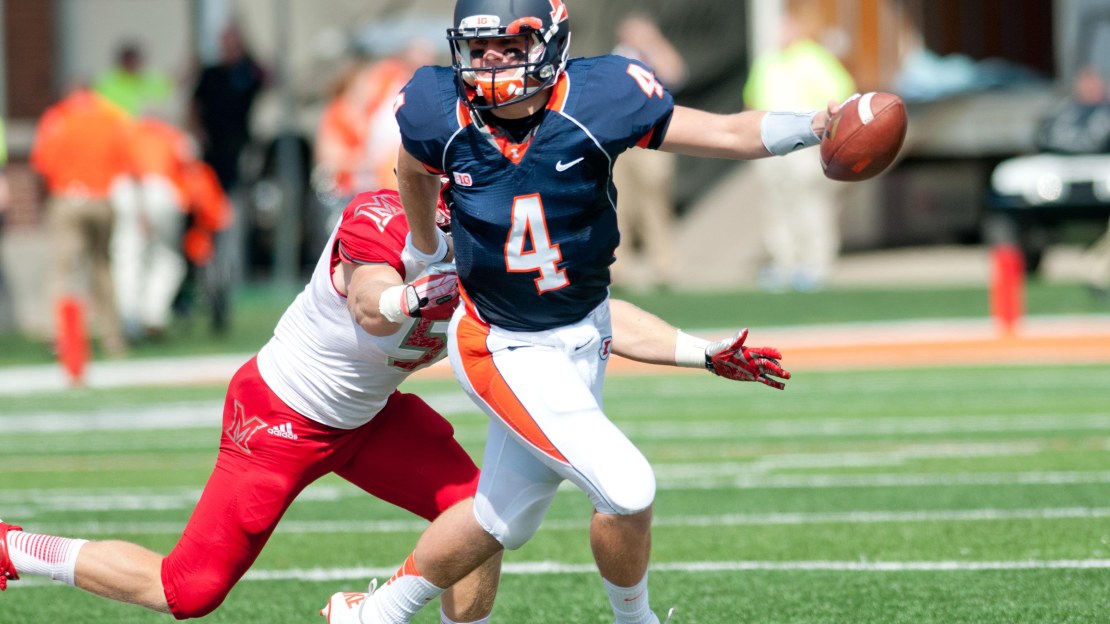 He?s often one of the most popular men on campus. Fans often clamor to see him buckle his chinstrap and trot onto the field: He?s the backup quarterback. When an offense is struggling, the No. 2 signal-caller is a favorite. Who is your school?s backup quarterback? How confident should you be in him? Get my ranking in this post.

1. Illinois. With Nathan Scheelhaase gone, the starting job is up for grabs in Champaign. Oklahoma State sophomore transfer Wes Lunt, senior Reilly O?Toole and athletic sophomore Aaron Bailey are in the mix. Lunt appears to be the front-runner to start. O?Toole would be a more-than-capable backup, having thrown for 975 career yards with eight touchdowns and nine interceptions. Bailey tossed one touchdown and ran for three more last season.

2. Michigan. The Wolverines like what they have in sophomore Shane Morris, who possibly could even push for the starting job after arriving as a decorated recruit. Morris has seen some action behind Devin Gardner, showing a good arm and developing savvy. Morris played in four games last season and started the bowl game vs. Kansas State, hitting 24-of-38 passes for 196 yards with 43 yards rushing.

3. Iowa. Incumbent Jake Rudock endured some growing pains and successes in his initial run as a starter in 2013 and looks primed to take the next step in his development. Sophomore C.J. Beathard-he of the long, blond, flowing locks–has shown flashes when he has played, finishing three games last season when Rudock left hurt. Beathard hit just 33 percent of his passes with a touchdown and two picks in his career but still would be a capable alternative.

4. Michigan State. This time last year, no one was positive as to who would be the starter. Connor Cook emerged the first month and is now one of the Big Ten?s best signal-callers, bringing some definition to the position in East Lansing. Sophomore Tyler O?Connor is the No. 2 man and is capable of playing. He played in three games last season, hitting nine-of-14 passes for 90 yards. But keep an eye on redshirt freshman Damion Terry, an athletic talent.

5. Purdue. The top job belongs to Danny Etling, who was thrown into the fire as a true freshman last year. In being inserted, Etling leapfrogged Austin Appleby. The 6-5, 229-pound Appleby is a talented sophomore signal-caller and an Elite 11 Quarterback finalist who has appeared in one game, hitting five-of-six passes for 68 yards and a touchdown vs. Iowa last season. Appleby could get the job done if needed. True freshman David Blough also could be a guy after arriving in January.

6. Maryland. Senior C.J. Brown is ensconced as the starter, bringing loads of experience to the position. The backup slot is in good hands with junior Caleb Rowe, who has seen significant action. He threw for 989 yards with five touchdowns and three interceptions last year but hit just 48.9 percent of his passes.

7. Northwestern. Junior Zack Oliver has looked good while on campus and is poised behind starter Trevor Siemian. Oliver is a big, strong-armed signal-caller who knows the offense and has played in eight career games, hitting just two-of-four passes. Redshirt freshman Matt Alviti is another option, as he would bring a running-style to the position.

8. Wisconsin. You get the feeling the staff doesn?t fully embrace junior starter Joel Stave. But the alternatives don?t appear to be better at the moment. Keep an eye on junior Tanner McEvoy. He arrived from a JC in 2013 with hype but moved to wide receiver and safety, where he started three games. The 6-6, 223-pound McEvoy moved back to quarterback in the spring and still hasn?t thrown a pass in Madison. But he is improving and his mobility makes him a better fit for what the Badgers want to do on offense.

9. Ohio State. Where have you gone, Kenny Guiton? The valuable backup to Braxton Miller is gone, no longer around to pull the Buckeyes? bacon from the fire. Sophomore Cardale Jones looks to be the next man up if Miller goes down. At 6-5, 250 pounds, Jones looks more like a linebacker than a quarterback. He has one career pass in three career games. Redshirt freshman J.T. Barrett also is in the mix.

10. Nebraska. Tommy Armstrong emerged last year as the starter with Taylor Martinez dealing with injury. The situation behind Armstrong is unsettled. Redshirt freshman Johnny Stanton has a big profile and an arm to match, but he hasn?t taken a snap. Sophomore Ryker Fyfe also is in the mix; he has one career pass attempt.

11. Rutgers. Senior Gary Nova has 28 career starts but doesn?t have a strangle hold on the job. Junior Mike Bimonte or redshirt freshman Chris Laviano could prevail. The problem? Bimonte hasn?t seen any action despite being on campus for three seasons. But he does know the system and is smart. Laviano also has no experience but has talent. Still, keep an eye on Bimonte and Laviano.

[ MORE: Nebraska comes in at No. 1 on linebacker rankings ]

12. Minnesota. After sharing time under center last season, the top job belongs to Mitch Leidner. Redshirt freshman Chris Streveler is poised to backup. He appears to be a good fit for Jerry Kill?s offense, a nice mix of athletic ability and passing savvy. Alas, Streveler never has taken a snap.

13. Penn State. The Nittany Lions will have a true freshman (Michael O?Connor) backing up a true sophomore (Christian Hackenberg). Each is very talented. O?Connor enrolled in January and went through spring drills, arriving as a heralded recruit. At 6-5, 225 pounds, O?Connor passes the eyeball test and has a strong arm-but he has a lot to learn.

14. Indiana. Just like that, the Hoosiers have gone from one of the best back-up situations in the Big Ten to one of the worst with the transfer of Tre Roberson to Illinois State. That dealt a massive blow to the depth of this position behind junior Nate Sudfeld. Who is the backup? Recently signed Danny Cameron–son of ex-Hoosiers coach Cam Cameron–or sophomore Nate Boudreau are in the mix. Ditto incoming freshman Alexander Diamont, who is good but too small at the moment.