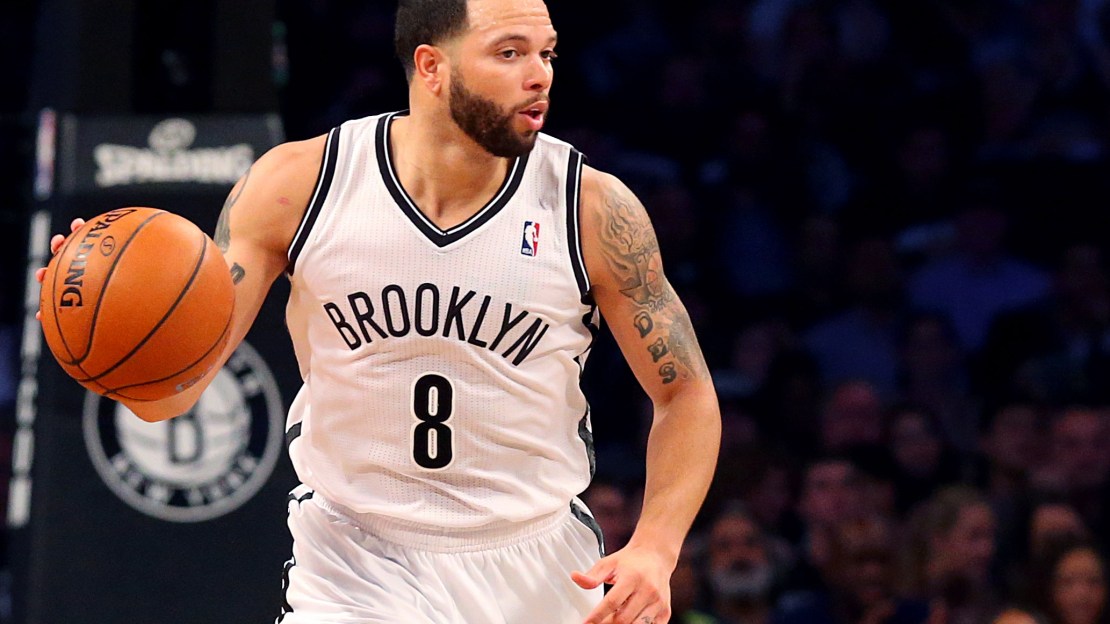 I love the NBA Draft. I also love writing the occasional "what-if" article that makes people think about what could have been. Anytime I get a chance to whip up a combination of the two, I'm going to take that opportunity and run with it… In this case, sprint with it.

I began thinking about past Big Ten draft picks and how they have fared in the NBA. What if every current Big Ten pro, not including this year's draft class, was filtered into a one-round NBA Draft?

I'm going to tell you, but first, let me set the guidelines here and explain how I came up with this.

There are 30 teams in the NBA. So, I took the records of all 30 teams this past season, and used that to determine the order of the draft. The team with the worst record in 2014, the Milwaukee Bucks, pick first. The team with the best record, the San Antonio Spurs, pick 30th.

Now, keep in mind, this list doesn't necessarily reflect the order of the top Big Ten players in the NBA today, because you have to take age, injuries and numerous other factors into account.

I also created a star (*) system based on current NBA success. The categories are as follows:

With that said, here's my prediction of what a mythical one-round draft of current Big Ten pros would look like. Again, 2014 draft picks were not considered here.

4. Boston Celtics: SG Victor Oladipo****
Big Ten School: Indiana
Current NBA Team: Orlando Magic
Age: 22
Career Stats: 13.8 PPG, 4.1 RPG, 4.1 APG
Why: Oladipo had a standout rookie season and all signs point to this guy being a future star in the NBA. He is a top-notch defender and is athletic enough to create his own shot from anywhere on the floor.

5. Utah Jazz: SG Eric Gordon****
Big Ten School: Indiana
Current NBA Team: New Orleans Pelicans
Age: 25
Career Stats: 17.5 PPG, 3.3 APG, 2.2 RPG
Why: Gordon is a scoring machine and would probably be higher up on this list if he could remain healthy for a full season.

6. L.A. Lakers: PF Jared Sullinger****
Big Ten School: Ohio State
Current NBA Team: Boston Celtics
Age: 22
Career Stats: 10.5 PPG, 7.3 RPG, 0.6 BLKPG
Why: Sullinger was a force this past season as Boston went through a rebuilding process. Add a couple solid pieces around him, and this guy has the chance to be a double-double machine for years to come.

7. Sacramento Kings: PG Trey Burke****
Big Ten School: Michigan
Current NBA Team: Utah Jazz
Age: 21
Career Stats: 12.8 PPG, 5.7 APG, 3.0 RPG
Why: Burke was a standout at Michigan and it looks like that should carry over into the NBA. He put up solid numbers in this rookie season, despite playing around a lack of scoring options in Utah.

9. Cleveland Cavilers: SG Evan Turner***
Big Ten School: Ohio State
Current NBA Team: Free Agent
Age: 25
Career Stats: 11.1 PPG, 5.3 RPG, 3.1 APG
Why: Turner was on the fast track to being an NBA star before he was dealt midway through last season to the Indiana Pacers. Still, who wouldn't want a 25-year-old with a diverse skill-set?

11. Denver Nuggets: PG Devin Harris***
Big Ten School: Wisconsin
Current NBA Team: Dallas Mavericks
Age: 31
Career Stats: 12.5 PPG, 4.8 APG, 2.4 RPG
Why: At 31 years of age, Harris is one of the older players in this group, but he is also one of the only guys to average 20-plus points and seven assists in a season. He is still a starting-quality point guard in the NBA.

13. Atlanta Hawks: C Cody Zeller***
Big Ten School: Indiana
Current NBA Team: Charlotte Hornets
Age: 21
Career Stats: 6.0 PPG, 4.0 RPG, 0.5 BLKPG
Why: Zeller didn't set the world on fire with his rookie numbers, but he showed promise and is still extremely raw, at just 21 years of age. This is a guy who could easily average 12-14 points and 8 boards per game in a few years.

14. Minnesota Timberwolves: SF Alan Anderson***
Big Ten School: Michigan State
Current NBA Team: Brooklyn Nets
Age: 31
Career Stats: 8.1 PPG, 2.2 RPG, 1.2 APG
Why: This is the first player on this list who went undrafted when he came out of college. Now, Anderson has developed into a solid rotational player and is one of the most multidimensional guys on this list, with the ability to play several different positions.

15. Charlotte Hornets: PF Carl Landry***
Big Ten School: Purdue
Current NBA Team: Sacramento Kings
Age: 30
Career Stats: 11.5 PPG, 5.2 RPG, 0.4 BLKPG
Why: Landry's career numbers are better than several players listed above him, but at 30 years of age, and with career-lows in both points and rebounds this past season, its tough to list him much higher. Still, it would be tough to pass on a guy who averaged 18 points 6.5 boards per game just four seasons ago.

16. Brooklyn Nets: SG Jason Richardson***
Big Ten School: Michigan State
Current NBA Team: Philadelphia 76ers
Age: 33
Career Stats: 17.3 PPG, 5.0 RPG, 2.7 APG
Why: In his prime, Richardson is another guy who would be near the top of this list. However, at 33, he's developed into more of a specialist, as opposed to a star, which he certainly was back in the mid-2000's.

17. Washington Wizards: C Byron Mullens**
Big Ten School: Ohio State
Current NBA Team: Free Agent
Age: 25
Career Stats: 7.4 PPG, 4.2 RPG, 0.2 BLKPG
Why: Back in 2008, Mullens was considered by many to be the top high school prospect in the nation before heading to Ohio State. After a rough start to his NBA career, it looks like the former Buckeye is finding his place in the league. At 7-0, 275 pounds, it would be tough to pass up on a guy what that type of size and potential.

18. Phoenix Suns: PF Kris Humphries**
Big Ten School: Minnesota
Current NBA Team: Free Agent
Age: 29
Career Stats: 6.8 PPG, 5.8 RPG, 0.6 BLKPG
Why: Humphries was a star during his short stay at Minnesota, and for the most part, his game has translated well to the NBA. However, at 29 years of age, this seems like a good spot for this former Gopher star.

19. Chicago Bulls: SG Shannon Brown**
Big Ten School: Michigan State
Current NBA Team: New York Knicks
Age: 28
Career Stats: 7.7 PPG, 1.9 RPG, 1.1 APG
Why: Brown is a top-notch athlete who looked like he found a nice home in Phoenix, before making the move to New York this past season. When put in the right system, this guy is a solid NBA bench player.

20. Toronto Raptors: C Meyers Leonard**
Big Ten School: Illinois
Current NBA Team: Portland Trail Blazers
Age: 22
Career Stats: 4.4 PPG, 3.4 RPG, 0.4 BLKPG
Why: This former Illinois standout hasn't seen a ton of playing time in his first two seasons, but the potential is certainly there. Once Leonard is able to add some more bulk to his frame and develop a few more post moves, he should see those minutes jump a lot.

21. Dallas Mavericks: SG E'Twaun Moore**
Big Ten School: Purdue
Current NBA Team: Free Agent
Age: 25
Career Stats: 6.2 PPG, 1.8 RPG, 1.8 APG
Why: Moore is one of the top shooters on this list, which makes him valuable at the NBA level. At 25, he still has plenty of solid basketball ahead of him.

22. Memphis Grizzlies: PF Reggie Evans**
Big Ten School: Iowa
Current NBA Team: Sacramento Kings
Age: 34
Career Stats: 4.1 PPG, 7.2 RPG, 0.1 BLKPG
Why: Looking for one of the toughest players in the NBA who can rebound with just about anyone? If so, Reggie Evans is your guy. At 34, he is certainly reaching the end of his playing career, but his defense and rebounding make him valuable to just about any team.

23. Golden State Warriors: C Kosta Koufos**
Big Ten School: Ohio State
Current NBA Team: Memphis Grizzlies
Age: 25
Career Stats: 5.4 PPG, 4.5 RPG, 0.8 BLKPG
Why: Like Mullens, this is a guy who was a highly touted player when he arrived at Ohio State. He has carved out a spot in the NBA as a guy who can come off the bench and bang down low with opposing big men.

25. Houston Rockets: PF Jon Leuer**
Big Ten School: Wisconsin
Current NBA Team: Memphis Grizzlies
Age: 25
Career Stats: 4.7 PPG, 2.6 RPG, 0.2 BLKPG
Why: Leuer is another guy who has played with several NBA teams in a short amount of time, but he averaged career highs in both points (6.2) and rebounds (3.2) this past season.

26. Miami Heat: SF Robbie Hummel**
Big Ten School: Purdue
Current NBA Team: Minnesota Timberwolves
Age: 25
Career Stats: 3.4 PPG, 2.5 RPG, 0.4 APG
Why: After two serious knee injuries, it is nice to see this guy carving out a career in the NBA. If LeBron James is going to stay in Miami, might as well surround him with some quality teammates, like Hummel.

28. L.A. Clippers: PF Deshaun Thomas*
Big Ten School: Ohio State
Current NBA Team: Free Agent
Age: 22
Career Stats: N/A
Why: Thomas left Ohio State early to enter in the NBA Draft and was a late second-round pick of the Spurs, which seemed like an ideal fit for the former Buckeye. He ended up playing last season overseas and will now vie for a roster spot while playing for San Antonio's Summer League team.

29. Oklahoma City Thunder: C Greg Oden*
Big Ten School: Ohio State
Current NBA Team: Free Agent
Age: 26
Career Stats: 8.0 PPG, 6.2 RPG, 1.2 BLKPG
Why: Once considered a once-in-a-decade type player, Oden has struggled with injuries throughout his NBA career, playing in just 105 career games since being selected No. 1 overall in 2007. However, if healthy, Oden still has value in this league, which he proved while playing in 23 games this past season with the Heat.

30. San Antonio Spurs: PF D.J. White**
Big Ten School: Indiana
Current NBA Team: Charlotte Hornets
Age: 27
Career Stats: 5.9 PPG, 3.2 RPG, 0.4 BLKPG
Why: White is another guy who has bounced around from team-to-team, but when he does get on the floor, he is both a capable rebounder and defender. This is solid value for the last pick of this all-Big Ten fantasy draft. Hope you enjoyed it.