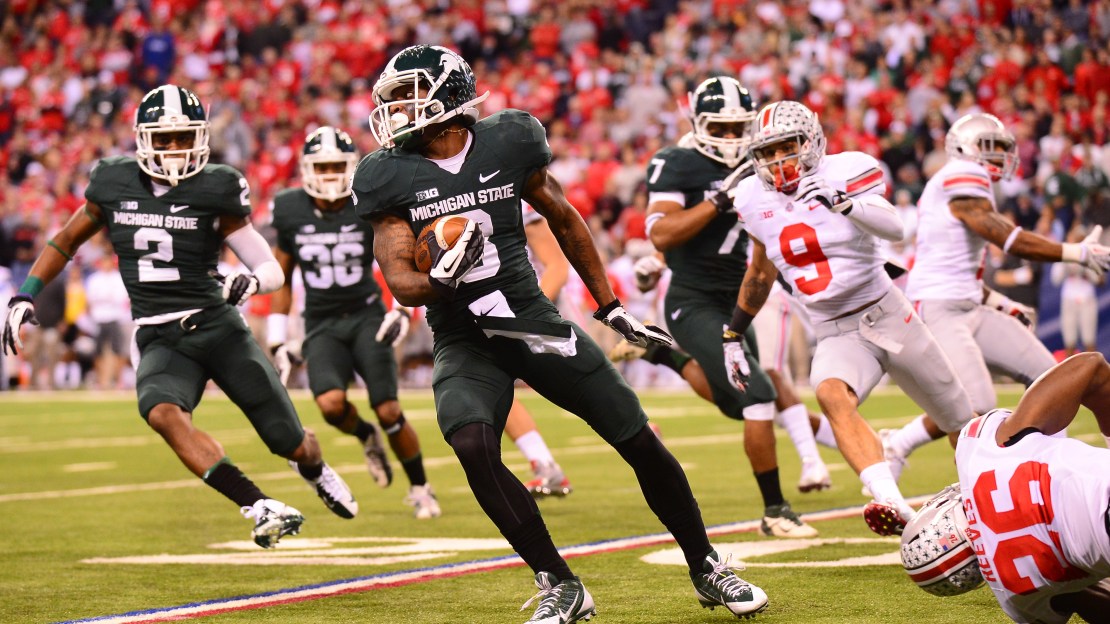 Specials teams are often the overlooked area of teams, but they?re the essential third component that can make or break a game or a season. That big return, booming punt that flips the field or clutch last-second field goal often looms large in any game. Here?s a look at the Big Ten special teams units.

1. Michigan State. The Spartans are sitting pretty with punter Mike Sadler and kicker Michael Geiger. Sadler has deft touch, pacing the nation in punts downed inside the 10-yard line. The big-legged Geiger delivered as a freshman by hitting 15-of-16 field-goal attempts. Macgarrett Kings Jr., is a good punt return man.

2. Maryland. The Terps have a keeper in Australian kicker Brad Craddock, who hit 21-of-25 field-goal attempts in 2013. However, punter Nathan Renfro needs more consistency. Still, he?s a vet who typically gets the job done. Speedy Will Likely is a deadly return man. There are other good options, too.

3. Minnesota. Peter Mortell is back after steadying an inconsistent punting situation. He?s one of the Big Ten?s best. Kicker Ryan Santoso can boom it and arrives with a fat scrapbook. Marcus Jones has proven capable as a kickoff and punt return man. Other return game options include Berkley Edwards, Antonio Johnson and KJ Maye.

5. Illinois. The Illini have a veteran punter in Justin DuVernois, but he may be pushed by Ryan Frain. The kicking needs to stabilize. Taylor Zalewski has been spotty, which is why David Reisner (a Navy transfer) is in the mix. V?Angelo Bentley is a game-breaking return man. Caleb Day and Darius Mosely are other options.

6. Indiana. The Hoosiers have a big void at kicker with Mitch Ewald gone. He left Bloomington as the school?s all-time leader in field goals, field-goal percentage and PATs. He also is IU?s second all-time leading scorer. Aaron Del Grosso is the next man up. Eric Toth is back to punt. No worries in the return game with the likes of Tevin Coleman, D?Angelo Roberts, Nick Stoner and Shane Wynn.

7. Rutgers. The Scarlet Knights have a nice kicker in Kyle Federico. The punting spot needs to be settled. Joe Roth figures to be the man. Janarion Grant is a very good return man who can go the distance.

8. Iowa. Lots of work to do. Incumbent punter Connor Kornbrath figures to be pushed by JC signee Dillon Kidd. The search is on for a kicker with Mike Meyer gone. Marshall Koehn looks like the front-runner. Kevonte Martin-Manley is a top punt return man, but a kickoff returner is needed.

9. Michigan. A kicker is needed with Brendan Gibbons departed after three years on the job. Matt Wile is primed to assume command. He has some experience. Punter Will Hagerup is back after being suspended in 2013. He will be one of the Big Ten?s best. Good options in the return game, with Dennis Norfleet on kickoffs and a host of speedy options on punts.

10. Wisconsin. The kicking job may be in flux. Incoming freshman Rafael Gaglianone could challenge inconsistent Jack Russell. Steady punter Drew Meyer is back. Kenzel Doe is an explosive return man who has proven he can go the distance.

11. Purdue. Paul Griggs is the incumbent kicker, but he could be pushed by Thomas Meadows. Griggs could assume punting duties with standout Cody Webster gone. The Boilermakers have good return men in Raheem Mostert, Akeem Hunt and Frankie Williams. Mostert may be the fastest player in the Big Ten.

12. Northwestern. The Wildcats have a weapon in the return game in Venric Mark, who is back from an injury-ruined 2013. He?s a game-breaker. Matt Harris is another good option. The kicking and punting are in flux with K Jeff Budzien and P Brandon Williams gone. Hunter Niswander is vying for both jobs. Chris Gradone is in the mix at punter with Arthur Omilian battling at kicker.

[ MORE: Nebraska comes in at No. 1 on linebacker unit rankings ]

13. Nebraska. Incoming freshman Drew Brown, the younger brother of ex-Husker place-kicking great Kris Brown, will battle Mauro Bondi for the kicking job. The punting job is in good hands with Sam Foltz. The return game needs some oomph. Who will step up?

14. Penn State. Lots of work to do for the new staff. Sam Ficken is back to kick; he has been inconsistent. Chris Gulla is the favorite to punt now that Alex Butterworth is gone. The staff will use DeAndre Thompson and Geno Lewis on kickoff returns. Jesse Della Valle is a solid punt returner.