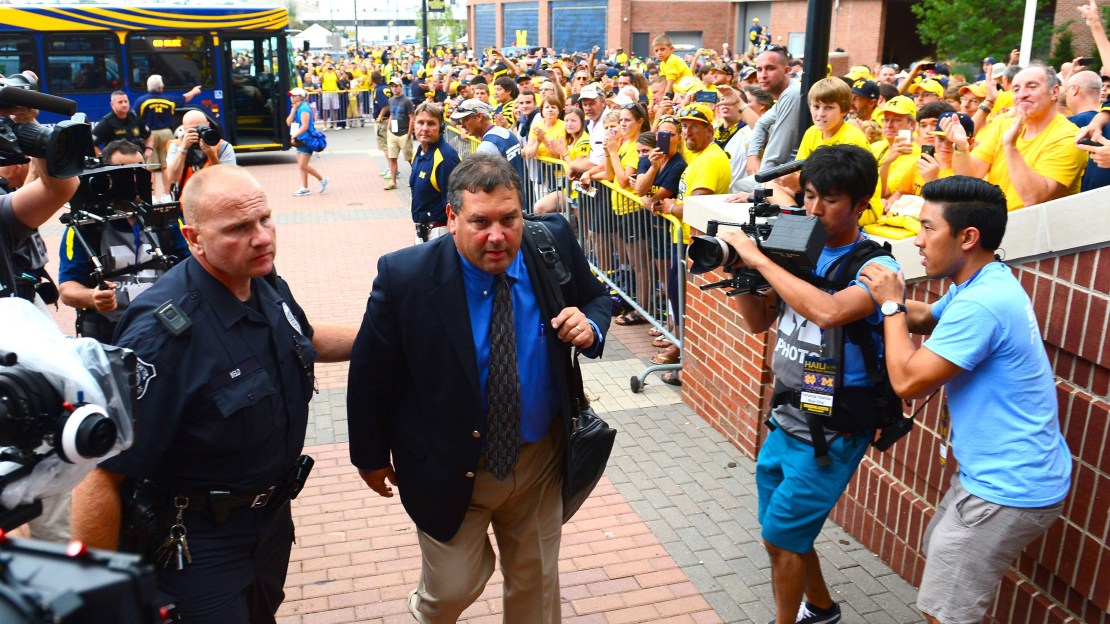 This is an interesting revelation from Michigan?s Brady Hoke, who says new offensive coordinator Doug Nussmeier will work from the sideline and not the press box during his maiden voyage calling plays.

Nussmeier predecessor Al Borges worked from the box, where most O.C.s tend to operate. Oh, in case you are wondering: Hoke still won?t wear a head set. And, I love it.

?What people don?t realize, I wear a headset when I need to wear a headset,? Hoke said, ?I have a guy behind me who is telling me every call. When guys come off the field, when guys are on the sideline — (not wearing a headset) allows me to coach.?

The great Joe Rexrode of Gannett Michigan has ranked the top players of the Mark Dantonio era. The No. 1 player? Kirk Cousins. I won?t argue with that.

You knew it was just a matter of time: A minor league baseball team in State College, Pa., soon will have a James Franklin bobblehead day. These are gonna be hot.

The first 1,000 fans through the gates at the State College Spikes' Aug. 28 home game against Williamsport will receive a bobblehead of Franklin, the team announced. Franklin predecessor Bill O'Brien received a similar homage.

Jim Delany has a message for schools: ?You have to invest to be competitive.?

This story points out that Rutgers will be competing with schools possessing unparalleled revenue streams. Three schools from the Big Ten ranked in the top five nationally in total athletics revenues in 2013, according to a USA Today database. By comparison, Rutgers ranked 32nd and had the highest athletic subsidy in the nation at nearly $47 million. Rutgers also has to wait six years to receive a full share of Big Ten revenues.

"I acknowledge that they have received a lot of help from the institution over time," Delany said. "I think they're putting in place a plan over time to transition as more resources become available. But in the short term, there's no doubt about it, you have to invest to be competitive. You have institutions in the Big Ten that have more resources, and that's because of not only the history and the tradition, but also the agreements we've been able to strike over many, many years. I think (Rutgers will) have to be really efficient."

Speaking of Rutgers, Devin and Jason McCourty have emerged as the faces of the football program.

They are the two most obvious candidates to assume the mantle with Ray Rice?s image taking a big hit. The twins from Nyack, N.Y., are good representatives. They're successful on the field, they're the poster boys for Rutgers' overachieving low-profile recruits and they have squeaky-clean images off the field.

Fellow newcomer Maryland has a ?new beginning? in recruiting as it enters the Big Ten.

Gearing up for a fresh start in a new conference, Maryland has hit the recruiting trail. 247Sports.com ranks Maryland's 2014 recruiting class - 16 incoming players who will join the Terps this year - at No. 7 in the Big Ten.

"Maryland was somewhat lost in the ACC," CBS Sports recruiting analyst Tom Lemming said. "Coming to the Big Ten sort of gives them a new beginning. They're an undefeated team now coming to the Big Ten and are no longer considered one of the doormats of the ACC."

Wisconsin freshman Jaden Gault has left the team to deal with depression.

The gang at InsideNU.com has been counting down the 10 most important Wildcat football players for 2014. No. 5: C Brandon Vitabile.

The renovation of the iconic Horseshoe at Ohio State continues with the addition of permanent lights. Check out this video and photo gallery.

Construction continued Tuesday at Ohio Stadium, with the tunnels from both locker rooms dug up as part of the $13.7 million construction project and 2,600-seat addition to the south stands. The OSU tunnel will be wider than the one in the past with a non-slip surface.

This story could make you think, laugh, smile ? Could Urban Meyer?s decision to return to his Ohio home from Florida tell us anything about how LeBron James is thinking?

I?ll leave you with this: Matt Painter may turn to a zone defense to help his Purdue team improve its defensive fortunes.

This would be a big departure for a program which has prided itself on playing rugged man-to-man defense over the years. Hey, desperate times merit desperate measures for a program coming off two disappointing seasons. Give Matt Painter credit for considering all options to revive this proud program.