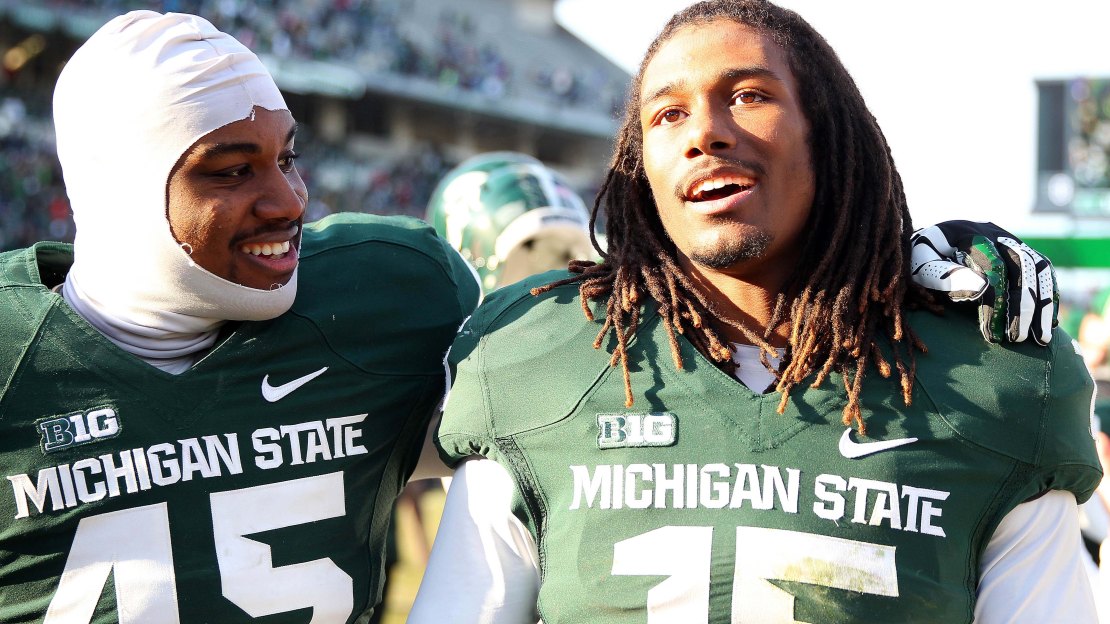 Few schools have played defense as well as Michigan State in recent years. And a big reason for the success has been the secondary, a unit known for its aggressive, press-man coverage. MSU will have another talented secondary in 2014. In fact, it will be the best in the conference. Here's a look at Big Ten defensive backfields.

1. Michigan State. This group has become famous for its ?No Fly Zone? moniker. Expect more standout play even with CB Darqueze Dennard gone. Trae Waynes is the new star corner. He?ll partner with Darian Hicks. Lots of competition at the safety spots with Jalyn Powell and RJ Williamson competing at strong safety and Kurtis Drummond and Demetrious Cox at free safety.

2. Michigan. This could be a special group with the arrival of heralded CB Jabrill Peppers. He?ll battle Blake Countess, Ray Taylor, Channing Stribling and Jourdan Lewis in a deep position. This group must eliminate the big plays. To that end, look for more aggressive play. FS Jarrod Wilson is back to start. The other safety spot will be a battle among Delano Hill and Dymonte Thomas.

3. Penn State. Lots to like with three starters back in CBs Trevor Williams and Jordan Lucas along with S Adrian Amos. Lucas emerged as a star last season, while Amos has 25 career starts to his credit. Ryan Keiser is primed to claim the other safety slot. Depth is good with CB Da?Quan Davis and S Malik Golden.

4. Nebraska. This group will build around S Corey Cooper and CB Josh Mitchell, who?s light in the pants but can hit. Cooper paced the Cornhuskers with 91 tackles last season. Who will start opposite Cooper? Ex-LB Nathan Gerry or LeRoy Alexander will battle. Jonathan Rose and Byerson Cockrell are the candidates to join Mitchell at corner. Charles Jackson is the nickel back.

5. Northwestern. This could be a very good secondary. Ibraheim Campbell may be the top safety in the Big Ten. He?ll team with hard-hitting Traveon Henry to give the Wildcats a rugged tandem in the back end. Entering his third year as a starter, CB Nick VanHoose is among the best at the position in the league. Matthew Harris looks like the other corner. Overall depth is good with CBs Daniel Jones and Dwight White and S Godwin Igwebuike.

6. Ohio State. Losing CB Bradley Roby and safeties Christian Bryant and C.J. Barnett hurts, but talent looms in the back end of this defense. The staff likes Vonn Bell and Tyvis Powell-last year?s nickel back–at the safety slots. Bell may be a star. Doran Grant-the only starter back–and Armani Reeves are the corners. Cameron Burrows is another good cover man.

7. Iowa. There's a mix of experience and youth here, with two starters back in SS John Lowdermilk and CB Desmond King. Sean Draper and Maurice Fleming are battling to start opposite King. Jordan Lomax figures to lock down the free safety slot after opening 2013 as a starting corner.

8. Wisconsin. This group has a nice cornerback duo to build around in rising star Sojourn Shelton and Darius Hillary. Devin Gaulden also is capable after coming on in the spring. The safety spots need to be watched. Michael Caputo looks good after moving back to the position following a spring switch to linebacker. Leo Musso, Peniel Jean and Austin Hudson are other options at safety.

9. Maryland. The Terps have one of the league?s better safety duos in Sean Davis (SS) and Anthony Nixon (FS). Davis paced the Terps with 102 tackles in 2013. CB Will Likely was a true freshman star last season, making 70 stops with a team-best six passes broken up. Senior Jeremiah Johnson, who missed most of last season but started 12 games as a sophomore, is opposite Likely.

10. Minnesota. This group lacks experience, but there?s talent for what was one of the most underrated units in the Big Ten in 2013. S Brock Vereen will be missed. First up to replace him: Antonio Thompson. Cedric Thompson is back to play the other safety slot after leading the team with 79 tackles. Eric Murray is the team?s top corner who broke up 10 passes in 2013. Ex-safety Derrick Wells should lineup opposite Murray.

11. Indiana. Long a weakness, this group has potential. The corner tandem of Michael Hunter and Tim Bennett is back. Bennett is an ex-safety who paced the nation with 20 passes broken up in 2013. SS Mark Murphy plays downhill. FS Antonio Allen is an emerging star who is coming off a knee injury. And keep an eye on youngsters Chase Dutra (S) and Rashard Fant (CB).

12. Purdue. This unit has a chance to be good with three starters back. There is experience at cornerback with Frankie Williams and Anthony Brown. Williams can cover. Brown was second on the club with 69 tackles in 2013. SS Landon Feichter is the heart, soul and guts of this unit-if not the defense. What he lacks in skill he compensates for with effort. Like Feichter, FS Taylor Richards is a returning starter who has a nose for the ball.

13. Rutgers. There?s nice potential. Lorenzo Waters and Deion Stephenson can run and hit from their safety spots. Anthony Cioffi could start at one cornerback spot. The other corner spot is up for grabs between Gareef Glashen and Nadir Barnwell. Depth is thin.

14. Illinois. On a defense littered with question, this unit is the biggest unknown. Experience is minimal, as only one senior dots the two-deep. Big plays? They were few in 2013, as this group produced just two picks and forced no fumbles. There are some intriguing options at corner in V?Angelo Bentley, Caleb Day, Eaton Spence and Darius Mosely. Zane Petty and Taylor Barton are the lone safeties with experience.