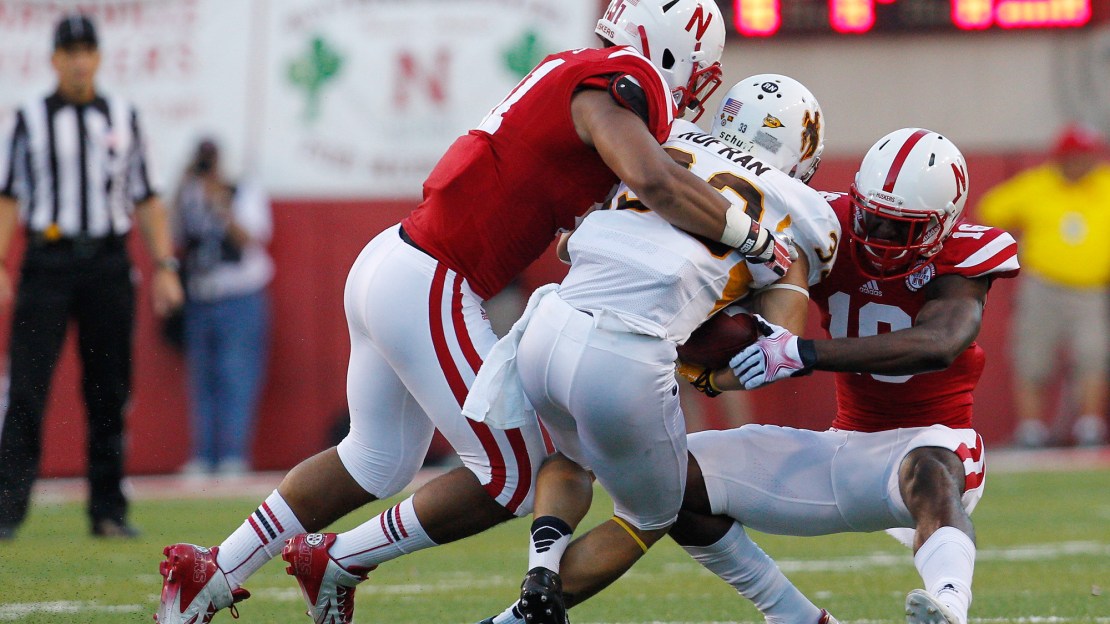 Linebackers are the heart and soul of any good defense. Speed, strength, athletic ability, toughness ? they must embody all of it. And no Big Ten team has a better collection of linebackers than Nebraska.

Here?s my ranking of the Big Ten's linebacking corps.

1. Nebraska. This group took some lumps in recent years but now looks primed to excel. Athletic ability and speed abound. Michael Rose will work inside. Zaire Anderson-maybe the most consistent of the bunch–and David Santos-who used to work inside–are on the flanks. Josh Banderas and Trevor Roach are quality reserves.

2. Michigan State. Max Bullough and Denicos Allen will be missed, but talent still looms. The staff will turn to big Taiwan Jones to man the middle. He?s a hitter. Jones will be flanked by Darien Harris-who will play a STAR spot–and Ed Davis, a speedy athlete who must blitz well. Mylan Hicks, Riley Bullough and Jon Reschke offer depth.

3. Ohio State. By season?s end, this could be the Big Ten?s top linebacking unit even with Ryan Shazier gone early. Joshua Perry is back. Can Curtis Grant hold off stud true freshman Raekwon McMillan in the middle? Speedy ex-prep quarterback Darron Lee is on the strong side. Depth is augmented by Camren Williams and Trey Johnson.

4. Michigan. Coordinator Greg Mattison has a nice veteran crew. Jake Ryan is a leader who has moved inside. Desmond Morgan has gone from the middle to the weak side. The strong side is manned by James Ross III, a great athlete who excels in space. Depth is good with the likes of Joe Bolden and Desmond Morgan.

5. Penn State. Linebacker U should have a solid group. Mike Hull has moved from the outside to the middle. There will be no shortage of athletic ability on both sides of Hull in the form of Brandon Bell and Nyeem Wartman. Bell finished 2013 with a flurry. Wartman is a former touted recruit who could blossom. Ben Kline, Gary Wooten and Matthew Baney are reserves.

6. Wisconsin. Even with Chris Borland and Ethan Armstrong gone, the Badgers have the makings of a nice corps with Vince Biegel, Marcus Trotter and Joe Schobert. This triumvirate combined for 9.5 tackles for loss and 105 stops in 2013. The staff thinks Schobert could be primed for a big season. Not bad for a guy who almost ended up having to walk on at North Dakota a few years ago.

7. Iowa. The Hawkeyes took a big hit here, losing stalwart starters Christian Kirksey, James Morris and Anthony Hitchens. But the projected starters could be salty. Quinton Alston will line up inside, flanked by Reggie Spearman on the weak side and Travis Perry on the strong side. Alston and Perry have experience. Spearman is a top athlete.

8. Maryland. Ex-safety Matt Robinson emerged as a playmaker in 2013 in this 3-4 scheme. Cole Farrand is back after earning honorable mention All-ACC honors. L.A. Goree had 76 stops in 2013, while Yannik Cudjoe-Virgil is back after missing the last seven games with injury.

9. Northwestern. This group has plenty of athletic ability. To wit, check out wide-side linebacker Chi Chi Ariguzo. He?s the Big Ten?s top returning tackler. Collin Ellis has moved inside to replace Damien Proby. It?s a battle between ex-safety Jimmy Hall and Drew Smith on the strong side.

10. Illinois. There?s some potential. Mason Monheim has moved from the middle to Jonathan Brown?s weak-side slot. T.J. Neal-a spring star–is in the middle. He could be a one of the defense?s top players. Mike Svetina and Ralph Cooper bolster the corps. Keep an eye on Earnest Thomas III, who plays a hybrid LB/S spot called STAR.

11. Indiana. All three starters are back-T.J. Simmons, Flo Hardin and David Cooper for a group that has athletic ability. Marcus Oliver and Clyde Newton are youngsters to watch. Kevin Wilson is especially high on Oliver. They all need to excel for a defense that ranked 120th in the nation in 2013.

12. Minnesota. This unit has something to prove. The staff needs De?Vondre Campbell and Damien Wilson to play well. Campbell is an angular, athletic freak. It hurt that JC transfer Cody Poock injured a knee in the spring. That means Jack Lynn figures to start. Depth is young and largely unproven.

13. Rutgers. This unit has been massaged. Speedy Steve Longa has moved to the weak side and Kevin Snyder is now inside. Quentin Gause is slated to start on the strong side. He?s coming off a shoulder injury. Depth is young, so if injuries happen, this group could struggle.

14. Purdue. This has been an Achilles? heel for almost a decade. Sean Robinson, who arrived on campus as a quarterback, continues to hold down a starting spot. He tries hard but often is overmatched. Joe Gilliam is another vet. Don?t be shocked if a pair of true freshmen starts: Gelen Robinson and Ja?Whaun Bentley. What they lack in experience they compensate for with talent and potential.