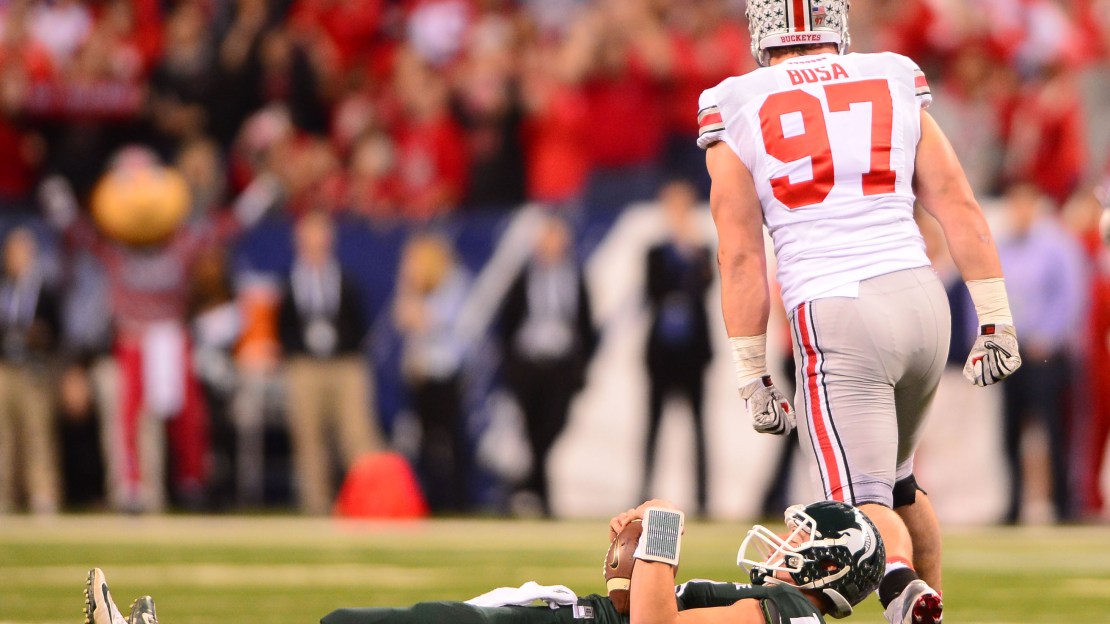 The Big Ten unit rankings continue with a look at the defensive lines. And, there are three standout fronts in the league, paced by Ohio State. In fact, the Buckeyes may have the best d-line in the nation.

1. Ohio State. This may be the finest front in the USA. Ends Noah Spence and Joey Bosa are formidable, combining for 15.5 sacks. Bosa was a true freshman phenom in 2013. Michael Bennett is a monster tackle. Running mate Adolphus Washington is an efficient force vs. the run and can get a push. Depth is good with the likes of Tommy Schutt, Steve Miller and Michael Hill.

2. Michigan State. The beat goes on for another strong Spartan front. Shilique Calhoun is back to reprise his role as a devastating end. He was the Big Ten Defensive Lineman of the Year in 2013. Marcus Rush brings pure speed off the other end. Demetrius Cooper is an intriguing prospect. Lawrence Thomas and Damon Knox are inside forces. Keep an eye on incoming freshman Malik McDowell impacting somewhere.

3. Iowa. This is a blue-collar group. The tackle duo of Carl Davis and Louis Trinca-Pasat has few peers. Davis is a mammoth space-eater. Trinca-Pasat is an effort guy. Depth behind them is good, with Darian Cooper, Faith Ekakitie and Jaleel Johnson. Ends Drew Ott and Mike Hardy aren?t flashy but get the job done.

4. Nebraska. Youth was served in recent years, and this unit struggled on occasion. Now, dividends will be reaped. Randy Gregory is a primo end, an athletic freak of the highest order. His presence makes fellow end Greg McMullen more effective. The tackle tandem of Vincent Valentine and Maliek Collins is coming on. Beware, Collins can also play defensive end. Depth is good, with players like Aaron Curry and Kevin Williams.

5. Michigan. This unit has enough talent to rank among the league?s best. It starts with ends Frank Clark and Brennen Beyer, who also has played linebacker. Big Willie Henry is on the nose. Lots of options at tackle, including Matt Godin, Chris Wormley and Maurice Hurst. It?s time to play to expectations.

6. Wisconsin. There is work to do along the three-man front. Still, this should be a good group. NG Warren Herring is a heavy anchor who tied for second on the club in sacks in 2013. The ends have a lot to prove. Chikwe Obasih is a promising youngster and potential star. Konrad Zagzebski is a senior looking for a big send-off.

7. Penn State. Deion Barnes can bring pressure off the edge, but he?s coming off a sophomore slump. Fellow end C.J. Olaniyan is coming off a breakout season. Tackle Anthony Zettel is a former end who lines up next to Austin Johnson, a lunch bucket player. Depth is pretty good, considering Penn State?s circumstances.

8. Maryland. All three starters are back in this 3-4 alignment. Nose tackle Darius Kilgo is a force who is difficult to move. He can stuff the run with aplomb. End Quinton Jefferson can bring the heat off the edge. Fellow end Andre Monroe was the club?s top lineman last season. Depth is good.

9. Rutgers. This is the best unit on the Scarlet Knights? defense. Depth is good. How good? Maybe as many as eight guys can play. The issue: size. This group may not have the girth to hold up in the physical Big Ten. End Dwjany Mera is a steady force. Fellow end David Milewski has overcome two ACL injuries. Tackle Darius Hamilton can get a push inside. NT Kenneth Kirksey is coming off an injury that ruined 2013.

10. Indiana. Long a weakness, the front could be solid this season in what will be a new three-man base front. Three starters are back in defensive end Nick Mangieri and tackles Bobby Richardson and Ralph Green III. Young ends Darius Latham and David Kenney are both extremely talented. Adarius Rayner is an anchor inside.

11. Northwestern. There is talent, but end Tyler Scott?s rushing skills will be missed. End Ifeadi Odenigbo looks primed to breakout after arriving in Evanston with a fat scrapbook. Ends Deonte Gibson and Dean Lowry form a nice duo. Inside, the staff likes Chance Carter and Sean McEvilly.

12. Minnesota. How do you replace Ra?Shede Hageman? You don?t. Still, the Gophers have some nice options. Workmanlike tackle Cameron Botticelli is inside along with Scott Ekpe. Lithe Theiren Cockran is one of the Big Ten?s better rushers. Michael Amaefula is a vet on the other side. Depth is solid.

13. Purdue. This group disappointed last year. Concerns persist. Still, potentially, this could be a nice group. End Ryan Russell is looking for a big senior season. Fellow end Jalani Phillips is a good athlete. Ra?Zahn Howard has trimmed down and could be a disruptive force inside. Ex-LB Jake Replogle is coming on. Offensive tackle Ryan Watson arrived with some hype; he may be primed to deliver.'

14. Illinois. This group has struggled recently, as Illinois was 116th in the nation in rush defense in 2013. Losing ends Tim Kynard and Houston Bates exasperates things. The staff likes ends Kenny Nelson, Paul James and JC transfer Jihad Ward. No doubt, it looks like a speedy group. Austin Teitsma needs to be an anchor on the interior. Teko Powell is on the nose. Keep an eye on DeJazz Woods.