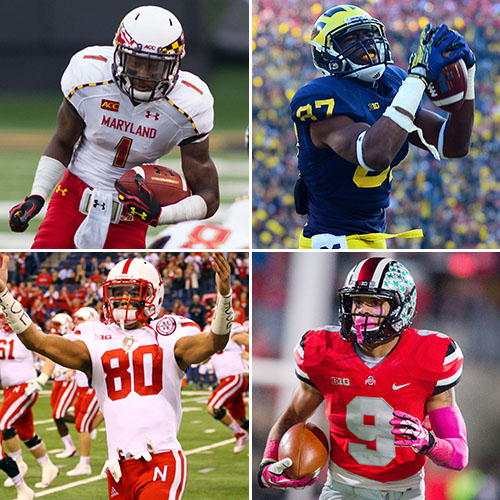 I continue my Big Ten unit rankings with a look at the receiving/tight end corps. There is no shortage of good targets, with Big Ten newcomer Maryland featuring a monster collection of pass-catchers.

1. Maryland. You?ll be hard-pressed to find a better tandem than Stefon Diggs and Deon Long, who each saw 2013 end early after suffering broken legs vs. Wake Forest. Even though he missed six games, Diggs still netted honorable mention All-ACC honors. Nigel King and Amba Etta-Tawo are back. Wait. There?s more. Levern Jacobs returns, too, after leading the team with 47 catches in 2014. And Marcus Leak, if back after re-enrolling, was the Terps? second-leading receiver in 2012. P.J. Gallo is the tight end.

2. Nebraska. This unit teems with playmaking ability. Kenny Bell is the leader. He?s a rangy target with speed who will leave campus as one of the Huskers? best-ever receivers. Players like Jordan Westerkamp, Taariq Allen, Sam Burtch and Jamal Turner round out this deep corps. Tight end is bolstered by Cethan Carter and Sam Cotton.

3. Ohio State. QB Braxton Miller is a great runner. But when he throws, he?ll have no shortage of top options. Devin Smith is a big-play wideout that defenses fear; he?s looking for a big finish. Dontre Wilson is an uber-fast water bug. Evan Spencer is a steady hand who can move the chains. Johnnie Dixon is an exciting youngster. Jeff Heuerman may be the top tight end in the Big Ten. Nick Vannett also is formidable.

4. Michigan. Jeremy Gallon will be missed, but some good options remain. Devin Funchess is a hybrid tight end/wideout who is becoming one of the Big Ten?s top weapons. True freshman Freddy Canteen emerged in the spring; can he carry it over to the fall? Amara Darboh, Jehu Chesson and Da?Mario James are other viable options. TE Jake Butt is rehabbing an ACL. He is a future star. A.J. Williams is another option at tight end.

5. Michigan State. Not long ago, this was an area of concern. No longer. Bennie Fowler is gone, but talent abounds in the form of Tony Lippett, Macgarrett Kings Jr., Aaron Burbridge, Keith Mumphery and Tennessee transfer DeAnthony Arnett. Josiah Price has made tight end a viable spot.

7. Indiana. Losing Cody Latimer and Kofi Hughes hurts. And tight end Ted Bolser is gone. They combined to make 154 grabs for 2,155 yards and 22 TDs in 2013. But don?t weep for the Hoosiers. Many proven targets are back, headlined by and speedy Shane Wynn. Nick Stoner is another burner who is back. Mitchell Paige, Caleb Cornett and converted RB Isaiah Roundtree offer hope, as does touted true freshman Dominque Booth. Tight end Jordan Fuchs turned heads in the spring.

8. Penn State. How do you replace Allen Robinson? You don?t. That?s the conundrum of the new staff. It?s hoped Geno Lewis emerges as the next go-to guy. He made 18 grabs last season. Stay tuned. Also in the mix are Matt Zanellato and Richy Anderson. The tight ends are among the Big Ten?s best with Jesse James, Kyle Carter and Adam Breneman forming a monster trio that combined for 58 grabs and 741 yards in 2013.

9. Iowa. This seemingly has been a sore spot for years. Is this the year some down-field threats emerge? Kevonte Martin-Manley is back after making 40 catches last year. Staffers are pumped about redshirt freshmen Derrick Willies, Andre Harris and Derrick Mitchell Jr. Yes, C.J. Fiedorowicz is gone, but the Hawkeyes will be OK at tight end with Jake Duzey, Ray Hamilton, Henry Krieger-Coble and George Kittle.

10. Rutgers. The staff knows what it has in Leonte Carroo and Ruhann Peele. But after that? Unknowns abound in the likes of rising sophomores Andre Patton, Carlton Agudosi and Janarion Grant. Good thing tight end Tyler Kroft is back after pacing the team with 43 receptions in 2013.

13. Minnesota. There has been a lot to like about Jerry Kill?s Gophers recently. The wideout corps hasn?t been one of the bright spots. But, that may be changing. Donovahn Jones and Drew Wolitarsky got thrown in as true freshmen in 2013 and impressed. Isaac Fruechte and KJ Maye are other options. Maxx Williams, the team's leading receiver in 2013, and Drew Goodger are a strong tight end tandem. Williams led the team with 25 catches in 2013.

14. Purdue. There?s speed and playmaking ability in this corps, which figures to get a lot of work. Danny Anthrop is a burner. DeAngelo Yancey is the future; he led the team with 32 grabs as a true freshman. Shane Mikesky and Cameron Posey are underrated talents who could blossom. Tight end has been a void for years. Dolapo Macarthy? Gabe Holmes? Someone needs to emerge.