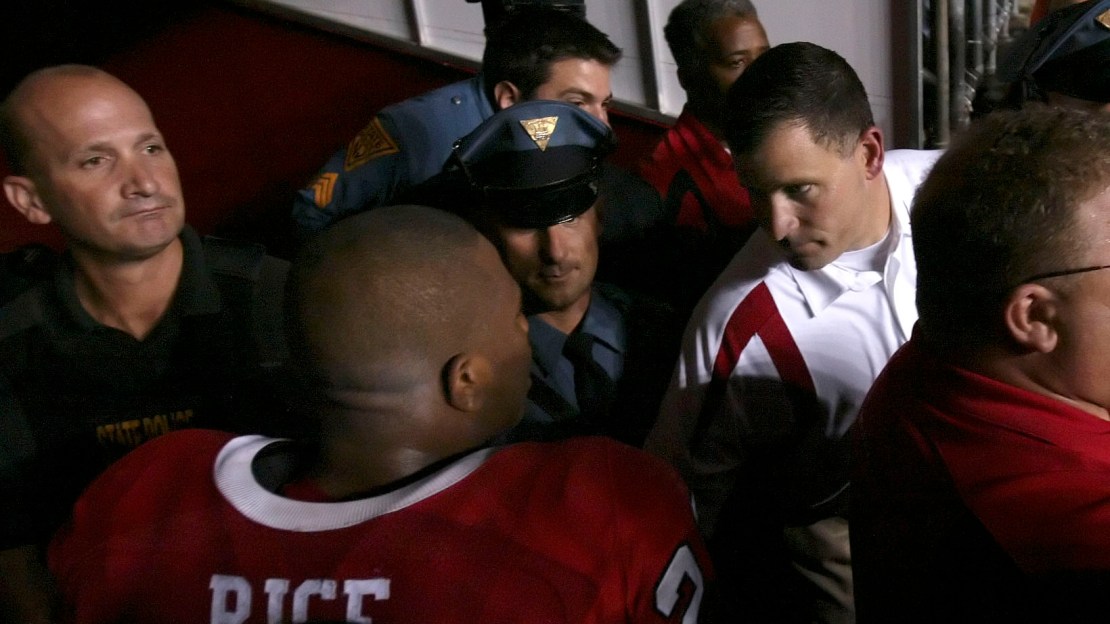 As a way of getting to know Rutgers and welcoming the Scarlet Knights into the Big Ten, here?s a look at the top five basketball and football seasons in school history.

1. 1975-76 (31-2). Led by Eddie Jordan, Phil Sellers, Mike Dabney, James Bailey and Hollis Copeland, the Scarlet Knights went 31-0 in the regular season. Alas, Tom Young?s club lost to Michigan and UCLA in the Final Four at The Spectrum in Philadelphia to end the national title dream.

2. 1966-67 (22-7). This team put Rutgers and Bob Lloyd in the national spotlight. Rutgers earned its first-ever postseason berth, as Lloyd and Jim Valvano-yes, that Jim Valvano–combined for 1,335 points while taking the Scarlet Knights to a third-place finish in the NIT in Madison Square Garden.

3. 1988-89 (18-13). This "Dream Big Dreams" season was orchestrated by coach Bob Wenzel and is indelibly etched in Rutgers hoop annals. That year, the Scarlet Knights won the Atlantic 10 title with a win over Penn State, reaching their first NCAA appearance in six seasons. To top things off, Wenzel earned conference coach of the year honors.

4. 2003-04 (20-13). Gary Waters guided Rutgers to an appearance in the championship game of the NIT. After defeating Iowa State in an overtime contest that featured a 35-point performance from Quincy Douby, RU lost to Michigan in the championship tilt. Both the semifinals and championship game were witnessed by a slew of Scarlet-clad Rutgers fans, as they packed trains from New Brunswick to New York's Penn Station for the game in MSG.

5. 1978-79 (22-9). Led by coach Tom Young, the Scarlet Knights knocked off No. 3 seed Georgetown before falling in a Sweet 16 clash to No. 10 St. John?s by two points. James Bailey was the star attraction, averaging 18.5 points. Abdel Anderson, Daryl Strickland and Kelvin Troy all averaged in double-figures. The Scarlet Knights finished the year No. 18 in the AP poll.

1. 2006. Greg Schiano?s rebuild of this program-he took over in 2001–reached its zenith with an 11-2 record and the program?s first-ever bowl victory. The next season, Rutgers received its first preseason ranking. The program has been straining to reach this level ever since.

2. 1976. Coached by Frank Burns, this squad went 11-0 and was invited to play unranked McNeese State in the inaugural Independence Bowl but balked after being passed over for more prestigious destinations. The Scarlet Knights boasted one of the nation's top defensive units, paced by All-America defensive end Nate Toran and standout defensive tackle John Alexander.

3. 1961. Led by captain Alex Kroll, the squad went 9-0-the school?s first perfect season. The Scarlet Knights capped the season with a fourth-quarter, 25-point comeback win over Columbia, to finish ranked No. 15. Rutgers was considered a contender for the Rose Bowl. Alas, the school president didn?t express interest with Rose Bowl organizers and the Scarlet Knights didn?t go west.

4. 1978. Frank Burns took Rutgers to a 9-3 mark and its first postseason, a Garden State Bowl appearance vs. Arizona State in Giants Stadium. Glen Kehler led a strong ground game with 883 yards rushing. The next season, Burns helped engineer a 13-7 upset of Tennessee on November 3, 1979 at Knoxville. Burns called it ?the greatest of my coaching career.?

5. 1960. The Scarlet Knights finished 8-1 under first-year coach John Bateman, the lone loss being a 14-12 decision vs. Villanova. The team was led by a strong ground game paced by Steve Simms.