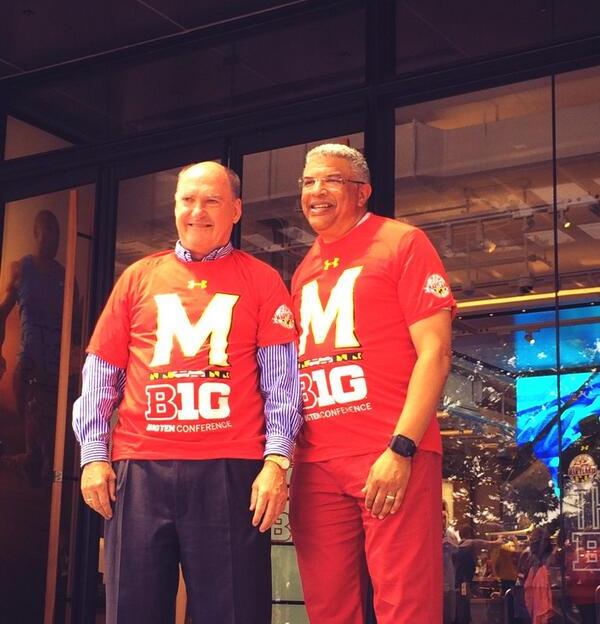 Today is July 1. But, it?s much more than just the first day of a new month. It?s also an historic day, the first day in new conferences for many schools. Rutgers and Maryland officially come aboard the Big Ten today.

Louisville joins the ACC. And on it goes. But this may be the end of league movement for the near future. This piece states that ?legal and practical reasons point to a lull. NCAA revenue sharing rights and the pay-for-play debate are the current attention-getters. All five major leagues - the Atlantic Coast, Big Ten, Big 12, Pac-12 and Southeastern conferences - have long-term television contracts in place. These ?grant of rights? agreements generally prevent further departures and make additions less attractive by forcing revenue division into smaller shares.?

Count Tom Izzo among those who thought Mitch McGary?s suspension was too harsh.

It is nuts that penalties for failed drug tests aren?t the same. Check this out: The story says that because McGary failed an NCAA-administered test in March, he was subject to a NCAA rule that called for a year suspension. That rule has since changed to a half-season. Had McGary failed a Michigan-administered test, his suspension would have been three games based on school policy. And had the positive test taken place at another school, the punishment could be different still.

Does this make any sense?

When Adreian Payne arrives in Atlanta, he?ll have a former famous Spartan to welcome him in Steve Smith.

?He?s a guy that I?m close to,? Payne said on draft night. ?He gives me advice about what to do and what?s the key to work on. I just try to continue to heed his advice and use it the best I can."

In case you were wondering, G. Gordon Gee-he of former Ohio State and current West Virginia presidential fame–and his bowtie remain among the nation?s highest paid leaders at public schools.

This guy will make a living playing hoops somewhere, right?

NU hoops coach Chris Collins says the postseason is a realistic expectation for the Wildcats this coming season.

I?m not gonna argue. Collins showed me enough during his maiden voyage in Evanston that he?s a fine young coach. And he has started acquiring talent, which was in short supply last season. The NCAA tournament ceiling finally may be punctured.

Minnesota scored a big coup in February when it secured the signature of running back Jeff Jones, one of the program?s most decorated recruits in recent years. But the in-state stud needs to work on his grades to be eligible.

This piece says that Jones is retaking several high school classes online this summer in hopes of improving his grade-point average, which could make him eligible under an NCAA sliding scale that takes into account grades and test scores. Those classes close on July 10. Hold your breath, Goldy.

Feel motivated to get off of your Barco lounger?