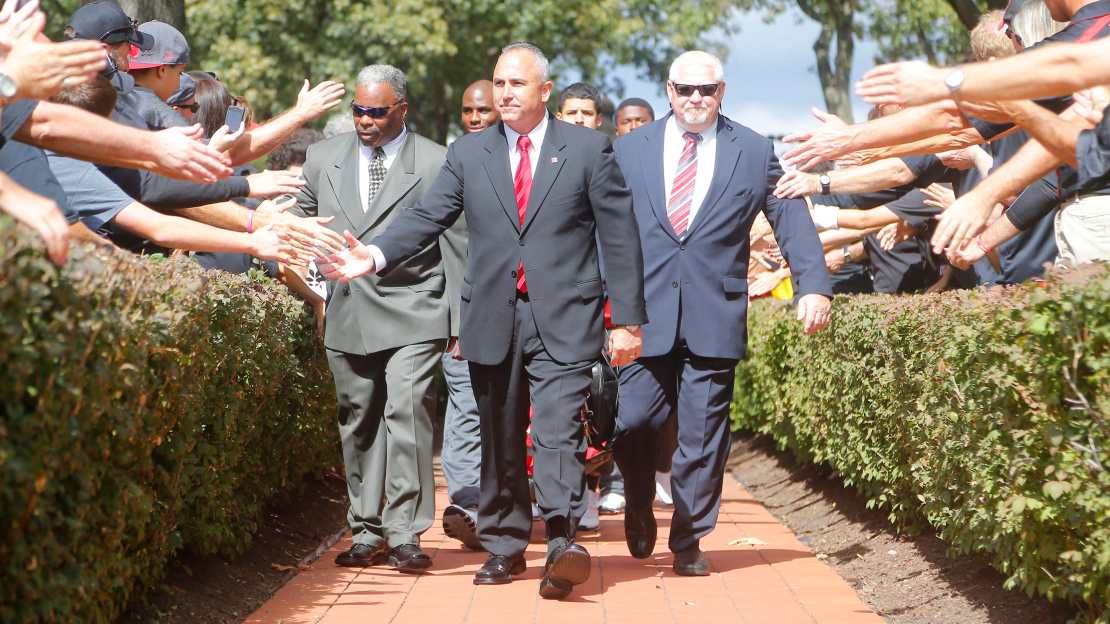 Planning a road trip to Rutgers to see your Big Ten team take on the Scarlet Knights? Well, you're in luck, because I asked Ryan Dunleavy (@rydunleavy), of Gannett New Jersey, to compile the perfect tour guide for visiting fans. See his full tour guide in this post.

Best Place(s) To Eat: New Jersey knows how to eat. Rutgers is best known for its dozens of variations on the Fat Sandwich served at the ?Grease Trucks? - food trucks parked in spots scattered around campus. The original Fat Darrell - chicken fingers, mozzarella sticks, French fries, lettuce, tomato and marinara sauce on a sub roll - was named Best Sandwich in the country by Maxim in 2004 and featured on Travel Channel?s Man vs. Food. Those looking for slightly upgraded accommodations - like table service - should visit Stuff Yer Face, which offers 35 different kinds of Stromboli on its pub fare menu and more than 100 different bottles of beer from around the world. Iron Chef Mario Batali got his start as a dishwasher at the place encouraging passersby to ?Enjoy a boli and a beer.? Polish off the meal with a scoop of Dexter Freebish ice cream - named after the pop band - at nearby Thomas Sweet.

Best Traditions: Two hours before kickoff of home football games, Rutgers players and coaches file off buses and march down the Class of ?56 Scarlet Walk as the band plays and the fans cheer. The walk takes the current Scarlet Knights past the ?First Scarlet Knight? - a statue commemorating the first college football game - and into High Point Solutions Stadium, where they look to ?Chop? down the opponent. The program credo for fighting through adversity, invented by former coach Greg Schiano, takes tangible form when a designated Rutgers player runs out of the pregame tunnel carrying an ax. The ritual used to include slamming the ax into a stump on the sidelines but the continuation got cut down after just a few years.

Famous Landmark: How is it that a paved blacktop parking lot behind the College Avenue Gymnasium and across from Skinny Vinnie?s pizzeria is a must-see landmark? Well, Lot #30, at the corner of Sicard St. and Senior St., is the site of the first college football game, held at 3 p.m. Nov. 6, 1869, between victorious Rutgers and Princeton in front of about 100 spectators. Hundreds of people cut through the lot every day unaware of its place in sports history, though a plaque with photos of Rutgers? players commemorating the first game hangs inside the gym used mainly by volleyball and wrestling these days. Just don?t park in the lot for too long as Rutgers is almost as famous for its enthusiasm toward distributing parking tickets.

Celebrity Most Likely To Be Seen: From the early 2000s until his death in June 2013, Emmy Award-winning star of The Sopranos James Gandolfini was a regular at his alma mater?s football games, mixing it up with the general crowd at the top of Section 102 or 103 in High Point Solutions Stadium. The torch for biggest celebrity has been passed to straight-talking 2016 Republican presidential prospect and New Jersey Governor Chris Christie, who grew up about 45 minutes away from campus but studied at the University of Delaware. Christie attended a couple of football games last season and isn?t to blame for gameday traffic on the John A. Lynch, Sr. Memorial Bridge above the Raritan River. At least not yet.

[ MORE: Get to High Point Solutions Stadium | Get to know Rutgers Athletic Center ]

Myths and legends: If a trip to Rutgers is meant to woo a significant other, stop by the Passion Puddle on the Cook/Douglas campus. Legend has it that if a couple in love walks around the body of water three times then they will get engaged. If a scare is on the agenda, the eighth-oldest college in the nation has plenty of old property to haunt. Ghost sightings have been are reported at the Jameson dormitory, the Little Theater and on the original six-building Old Queens campus. Namesake Colonel Henry Rutgers is said to be a friendly ghost, while the Grey Lady lurks in the bell tower. The bell, a gift from the colonel in 1826, is rung annually at graduation, at the new student convocation and on Rutgers Day but otherwise is reserved for significant achievements or commemorations. It was last rung for the women?s basketball WNIT title in April.