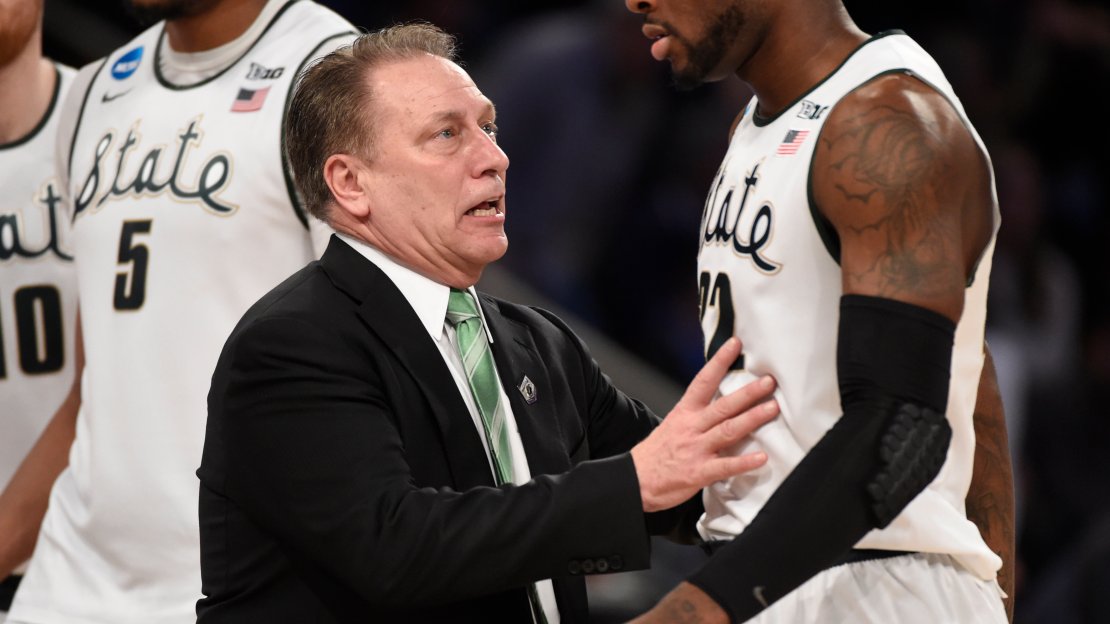 Recruiting hasn?t been kind to Tom Izzo the last few seasons. Michigan State fans know it. Izzo has swung and missed on some big-time recruits. So, it looks like he?s adjusting his strategy. Hey, it?s not just about winning Big Ten titles in East Lansing. It?s about competing for national crowns. Top, top talent is needed to do that.

?We had two tough years,? Izzo said last week at the Associated Press sports editors meeting. ?When I say tough years the one year we recruited Jabari (Parker) and put a lot into that and we only needed one guy that year and didn?t get him and then the way we started out last year with the six or seven guys that we lost to Kansas, Kentucky and Duke. That?s a bummer in some ways.?

Doug Lesmerises of Cleveland.com has a look back on the recent NBA draft, which was the best for the Big Ten since 1990.

Iowa?s Roy Devyn Marble heard his name called in the recent NBA draft. Which Hawkeye will be drafted next?

Fran McCaffery is adding some good talent to the program. Rick Brown of HawkCentral.com thinks forward and senior-to-be Aaron White is the logical choice to be the Hawkeyes? next NBA draft pick. Iowa hasn?t had a player selected in the two-round draft in back-to-back years since 1998 (Ricky Davis, Ryan Bowen) and 1999 (J.R. Koch). It seems to me it may be a longshot for Iowa to end that streak.

Ben Brust of Wisconsin wasn?t picked but will play for the Bucks in the summer league.

He?s the only key loss for the Badgers, who figure to be a preseason Top 5 team after last year?s Final Four run.

Sam McKewon of Omaha.com is impressed with the Big Ten?s non-conference schedule. And, he should be. Because, well, it is impressive.

Sept. 6 is the big day, when Ohio State plays Virginia Tech, Michigan will be visiting Notre Dame and Michigan State will be battling Oregon. It doesn't get much better than that, people.

Minnesota D.C. Tracy Claeys is one of the Big Ten's top assistants. His defense was the unheralded aspect of last year?s surprisingly strong season in Dinkytown that included wins over Nebraska and Penn State. And, Claeys is just getting started.

The Gophers ranked 25th in the country in points allowed last year (22.2) after ranking 45th (24.7) the previous year. Now Claeys has to replace five starters, including Brock Vereen and Ra?Shede Hageman. I?m not betting against him.

?I?ll be disappointed if we don?t play better this year again,? Claeys told Joe Christensen of the Minneapolis Star-Tribune. ?We?re going to have more kids this year than ever who are going to play who?ve already got two years or more of experience. So the depth is going to be there, and we?re getting better athletically.?

The search is on for Penn State?s next A.D. Who could it be?

Speaking of Penn State, here?s a look at how the offensive line shapes up for 2014. It?s an area of concern. At least stud left tackle Donovan Smith is back. He?ll be among the best blockers in the Big Ten this fall and a fine centerpiece.

Penn State is replacing guard John Urschel, center Ty Howle and tackles Adam Gress and Garry Gilliam, who split time on the right side. Veteran Miles Dieffenbach was primed for a big role but incurred a knee injury in the spring. Will he be OK?

A good debate on InsideNu.com: What will make Northwestern?s 2014 a success? Just getting back to a bowl would qualify as a success in my book after last year?s disappointment. Pat Fitzgerald has more than enough talent to do that.

Meyers Leonard was one of my favorite Illinois players. (I wish he had stayed another season.) Marcus Jackson of the Champaign News-Gazette catches up with the former Illini. And, things are looking up for him.