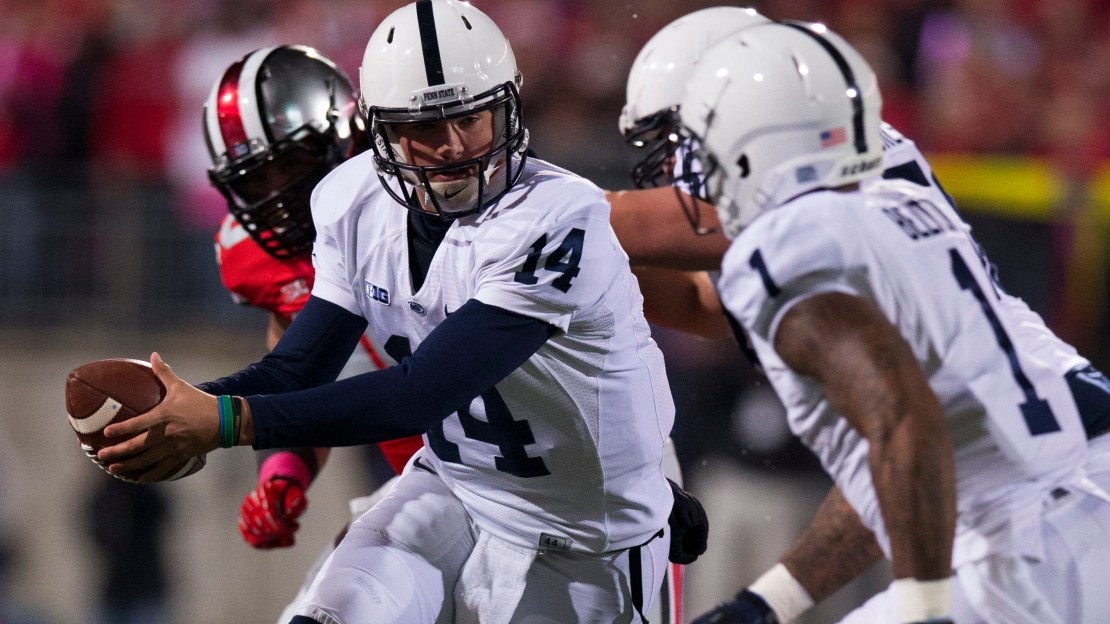 The dog days of summer are settling in. That means two things: The Cubs? season is officially over, and it?s time to look at the Big Ten units. I?ll begin with a look at the offensive backfields. And, as you?ll see, there is a lot of talent at running back-as well as some top-flight quarterbacks.

1. Penn State. The Nittany Lions have an impressive array of talent led by QB Christian Hackenberg, who has few peers as a passer and is a sure-fire future first-round selection. There also is a collection of nice running backs, including the likes of Zach Zwinak, Bill Belton and Akeel Lynch. Each is capable of starting. The rugged Zwinak has rushed for 1,989 yards and 18 touchdowns the last two seasons.

2. Michigan State. QB Connor Cook was a revelation last season, emerging early on to become one of the top signal-callers in the nation. And just think: He has two years of eligibility left. No one saw RB Jeremy Langford rushing for 1,422 yards last season. Depth is solid, including Delton Williams.

3. Ohio State. Yes, RB Carlos Hyde is gone. But QB Braxton Miller is back to reprise his role as one of the nation?s most deadly weapons. This could be his Heisman season. The Buckeyes have no shortage of promising running backs, with Ezekiel Elliott leading the charge.

4. Iowa. If you see Kirk Ferentz crack a smile, it?s because of this unit. QB Jake Rudock will benefit from the growing pains he endured as a first-time starter in 2013. He needs to refine his down-field passing and go from game manager to playmaker. It has gone from famine to feast at running back with the likes of Mark Weisman, Damon Bullock and Jordan Canzeri at a position stocked with talent.

5. Nebraska. QB Tommy Armstrong had a baptism by fire last season, when Taylor Martinez endured an injury-filled season. Armstrong had his moments but needs to improve his accuracy, although it?s difficult to argue with his 7-1 mark as a starter. Ameer Abdullah is one of the nation?s finest running backs, a true game-breaker. Backup Imani Cross may be the most physical back in the Big Ten.

6. Wisconsin. You get the feeling Badger coaches feel they can do better at quarterback than Joel Stave. But is anyone on this roster a better option? In a perfect world, Gary Andersen would have a more mobile signal-caller. Melvin Gordon is primed to reprise his role as one of the nation?s top backs. He?s a Heisman threat. RB Corey Clement teems with potential.

7. Indiana. The transfer of Tre Roberson hurts depth at quarterback. But Nate Sudfeld looks primed for stardom. Tevin Coleman is one of the most underrated running backs in the nation, a bigger back with some giddy-up. D?Angelo Roberts is a shifty back.

8. Rutgers. Gary Nova is a steady hand under center for the Scarlet Knights. The good: 51 career TD passes. The bad: 39 career picks. Paul James is a quality back. But can he stay healthy? Depth is good behind him.

9. Minnesota. This is Mitch Leidner?s team. And coaches have to like how he played in the bowl game. But Leidner is a work in progress as a passer. RB David Cobb emerged from nowhere to run for over 1,000 yards. Depth is strong with Rodrick Williams, Donnell Kirkwood and speedy youngster Berkley Edwards.

10. Northwestern. The Wildcats will miss QB Kain Colter, who could make something out of nothing and was an underrated passer. Trevor Siemian assumes command. He?s a veteran hand and a good passer but is nowhere near the athlete that Colter was. Can RB Venric Mark regain his 2012 form when he ran for 1,366 yards? Injuries ruined 2013. Treyvon Green and Stephen Buckley can carry the load if needed.

11. Michigan. QB Devin Gardner teems with talent and has looked spectacular at times (remember the ND game?). He needs more consistency and can?t force things. Running back was a sore spot last season. Yes, a struggling line was an issue. But better play is needed behind Gardner, beginning with Derrick Green. Keep an eye on De?Veon Smith.

12. Maryland. QB C.J. Brown is back for a sixth season. He?s a better runner than passer, but he has made good strides in coordinator Mike Locksley?s offense. The search if on for a starting back. There are options galore, with Brandon Ross, Jacquille Veii, Wes Brown and Albert Reid in the hunt.

13. Illinois. This is one of the most intriguing backfields in the Big Ten. The X-factor is Oklahoma State transfer QB Wes Lunt. If he?s as good as many think, the Fighting Illini could improve and perhaps make a bowl push. Josh Ferguson is a jack-of-all trades running back who excels as a pass catcher.

14. Purdue. The Boilermakers may have found something in QB Danny Etling, who was thrown into the fire (and to the wolves) last season as a true freshman. But some think he?ll be pushed for his job by Austin Appleby and David Blough. Stay tuned. It?s hoped converted wideout Raheem Mostert will become a threat at running back with his super speed. Akeem Hunt is a diminutive back with slipperiness.