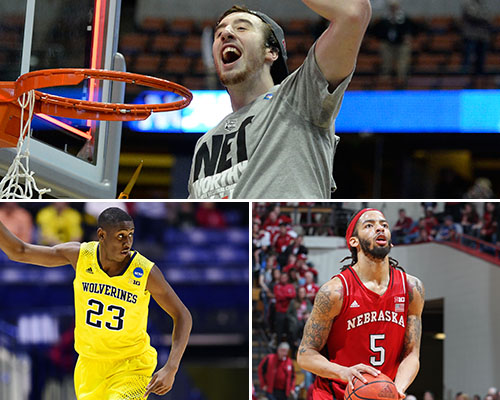 The 2014 NBA Draft is hardly in the rearview mirror, but now it's time to take a super-early look at the Big Ten's top 2015 draft prospects. Who is the top prospect? BTN analysts Stephen Bardo and Shon Morris have different answers.

1. Caris LeVert, Michigan. Big guard who can play three positions, including point guard. Ability to shoot, pass, break down defenders off bounce, rebound, and defend makes him a first-round lock.

2. Terran Petteway, Nebraska. Leading returning scorer in Big Ten can shoot with range and finish at the rim. His length could allow him to become above average defender in NBA.

4. Sam Dekker, Wisconsin. Big wing with athleticism will allow him to play 2 or 3 at next level. Must become more assertive more often at NBA level.

5. A.J. Hammons, Purdue. If AJ could find a way to be aggressive more consistently he could be a 10-12 year NBA guy. Skill set is there, consistency and moxy isn't yet.

1. Frank Kaminsky, Wisconsin. Versatile 7-footer who can put the ball on the floor and finish with either hand.

2. Caris LeVert, Michigan. Will continue run of Michigan draft success – continues to improve and will be focal point.

3. A.J. Hammons, Purdue. Tremendous potential when locked in. He is a Big Ten Player of the Year candidate and impacts the game on both ends.

4. Sam Dekker, Wisconsin. Tremendous athlete who continues to improve. He is poised for a breakout year.

5. Terran Petteway, Nebraska. Scorer who can finish at the rim and is improving as a perimeter shooter.