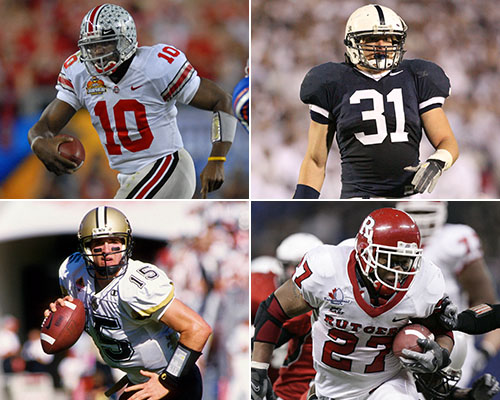 Goodbye, BCS. Hello, College Football Playoff. With the new playoff system set to debut this fall, I hit the rewind button and asked one beat writer from all 14 schools for his team's top player of the BCS era.

Here is what I got.

* Responses are based on these writers' personal opinions, and they are not speaking on behalf of the publication for which they write for.

Matt Daniels (@mdaniels_NG), News-Gazette: Juice Williams (2006-2009) – The BCS era didn't exactly treat the Illini well. The program only made two bowl appearances, with losses in the 2008 Rose Bowl and 2002 Sugar Bowl. The play of Juice Williams during the 2007 season, though, is one Illini fans still talk about in Champaign-Urbana. The dual-threat quarterback from Chicago with the catchy nickname dazzled with his arm (1,743 passing yards) and his feet (755 rushing yards) during that memorable season. Plus, persuading coach Ron Zook to go for it on fourth-and-short (and then converting it with a QB sneak) during the Illini's upset win at No. 1 Ohio State is part of program lore now. Williams left Illinois as the school's all-time leader in total offense with 10,594 yards (since surpassed by Nathan Scheelhaase) and ranks third on the school's all-time career passing chart with 8,037 yards. He's back working on Tim Beckman's staff as director of alumni and former player relations, a role well-suited for one of the most recognizable Illinois players during the BCS era.

Dustin Dopirak (@DustinDopirak), Bloomington Herald-Times: Antwaan Randle El (1998-2001) – He's both Indiana's all-time leading passer (7,469 yards) and second-leading rusher (3,895 yards), which gives him 3,000 more total yards (11,364) than any other player in Indiana history. He scored a combined 45 touchdowns between rushing and receiving, which is the second most in IU history, and he threw for another 42 on top of that, which made him the first player in I-A history to pass for and score more than 40 touchdowns. He was the Big Ten MVP despite playing on a 5-6 team, which tells you all you need to know about how much he was respected.

Rick Brown (@ByRickBrown), Des Moines Register: Bob Sanders (2000-2003) – Lightly recruited out of Erie, Pa., the 5-foot 8-inch Sanders arrived when Iowa needed an influx of talent, especially on defense. Coach Kirk Ferentz was one year into the job when he convinced Sanders to come in 2000. Sanders gave that Iowa defense toughness and a hard-hitting personality, earning all-Big Ten laurels for three straight seasons (2001-2003) and leading the program back to respectability. Iowa was 1-10 the year before Sanders arrived. The Hawkeyes went 11-2 and 10-3 in his final two seasons, and finished in the nation?s Top 10.

Jeff Barker (@sunjeffbarker), Baltimore Sun: E.J. Henderson (1999-2002) – Fans often think of offense first, but there?s a good argument for rating linebacker E.J. Henderson as Maryland?s most dominant player of the BCS era. It doesn?t hurt that he was on one of the school?s most memorable teams - the 2001 unit that played in the Orange Bowl. Consider his individual achievements. He won the Dick Butkus as the nation?s outstanding linebacker and the Bednarik Award as defensive player of the year in 2002. He ended his regular-season career with consecutive 19-tackle games. He was a two-time consensus All-American and his name is posted inside Byrd Stadium along with others who ranked as the program?s best.

Larry Lage (@LarryLage), Associated Press: Mike Hart (2004-2007) – In my opinion as a Michigan beat writer, the most dominant football player during the BCS era – based on what he did as a Wolverine – has been Mike Hart. Tom Brady has gone on to be the best player from the era, but he shared snaps as a senior with Drew Henson in 1999. Hart, meanwhile, led the team in rushing in each of his four years from 2004-07 and finished with the school's career rushing record with 5,040 yards. He set the mark high enough to hold off hard-charging Denard Robinson. The dual-threat quarterback was considered for this distinction, but he did not win a Big Ten title with Rich Rodriguez or Brady Hoke. Hart, though, helped the school win its 42nd and last conference championship in 2004 and the Wolverines have failed to find a consistently dominant running back since he left.

Jack Ebling (@JackEbling), The Drive With Jack: Darqueze Dennard (2010-2013) – Michigan State's best player since 1998 has been Darqueze Dennard, a game-changing, lockdown corner, the reigning Jim Thorpe Award winner and the key to last year's 13-1 season. He would rank ahead of Charles Rogers, T.J. Duckett and Julian Peterson. But the most important player the Spartans have had in that span has been Kirk Cousins, as good a leader as any program could want and the winningest quarterback in MSU history, including a Big Ten title and back-to-back 11-win seasons.

Chip Scoggins (@chipscoggins), Star Tribune: Greg Eslinger (2002-2005) –  I?d give center Greg Eslinger a slight nod over Laurence Maroney and Tyrone Carter as the Gophers best player in the BCS era. Eslinger was exceptional in Glen Mason?s zone blocking scheme and was relentless in the way he moved and blocked defenders downfield. He started all 50 games of his career and was a three-time All-American who won the Outland Trophy and Rimington Trophy as a senior. The Gophers had one of the top rushing offenses in college football in those years.

Eric Olson (@ericolson64), Associated Press: Ndamukung Suh (2005-2009) – Though Eric Crouch won the 2001 Heisman Trophy, Suh was a game-changer in the middle of the defensive line and anchored a dominant Blackshirts unit. He won AP player of year in 2009 to become the first defensive player to do so, and he swept Lombardi Award and Outland Trophy.

Teddy Greenstein (@TeddyGreenstein), Chicago Tribune: Dan Persa (2008-2011) – Tough call, but I?ll go with Dan Persa. He didn?t start until his redshirt junior season while sitting behind future pro Mike Kafka, but Persa had a phenomenal 2010 campaign. After he fired the game-winning touchdown pass to beat Iowa , the 7-3 Wildcats lost their final three games. A torn Achilles limited him in 2011, but Persa still broke the NCAA record by completing 72.7 percent of his passes. And, when healthy, he was a sensational scrambler.

Kyle Rowland (@KyleRowland), 11 Warriors: Troy Smith (2003-2006) – The list of names at Ohio State is long, especially when you factor in the Buckeyes were one of the winningest teams during the BCS era. But I'd have to side with Troy Smith. He was Ohio State's only Heisman Trophy winner during that time-frame and nearly every big game he played in. Sure, he whiffed in the national championship game against Florida. That doesn't disqualify him, though. Smith's 2006 statistics led to one of the most resounding victories ever in Heisman Trophy voting. He completed 65 percent of his passes for 2,542 yards with 30 touchdowns and just six interceptions — and he defeated two No. 2-ranked teams in fairly convincing fashion (the Michigan game wasn't as close as the score indicated). 2006 wasn't Smith's only great year. He was every bit as good in 2005, a year in which Ohio State could make the argument for being one of the top two-loss teams of all-time. Many will point to the Florida game, but his heroics against Michigan in 2004, 2005 and 2006 mean Smith will forever live in Buckeye lore.

Mark Wogenrich (@MarkWogenrich), Allentown Morning Town: Paul Posluszny (2003-2006) – Interesting question, but I'm going with Paul Posluszny. Simply an unstoppable defensive force who led the team in tackles three times, won the Chuck Bednarik Award twice and was named the Butkus Award-winner as well. Posluszny made nearly every play in his vicinity over 37 career consecutive starts, and Jack Ham called him the best linebacker ever at Penn State.

Mike Carmin (@carminjc), Lafayette Journal and Courier: Drew Brees (1997-2000) – He led the Boilermakers to the 2000 Big Ten championship and a spot in the Rose Bowl – a place the program hadn't seen in more than three decades. Thrived in Joe Tiller's offense bringing a new and exciting style to the conference.

Dan Duggan (@DDuggan21), NJ.com: Ray Rice (2005-2007) – A number of great players have come through Rutgers, particularly during the program's rise under Greg Schiano from 2001-2011, but Ray Rice stands above the rest. A three-star recruit, Rice stepped into the lineup as a true freshman in 2005 and led the Scarlet Knights to their first winning season in 13 years. The 5-foot-8 running back was the big man on campus as a sophomore, rushing for 1,794 yards as Rutgers enjoyed its best season ever. Rice capped his career with 2,012 yards rushing in 2007. Rice shattered Rutgers career records for rushing yards, attempts and touchdowns in his three-year career, which coincided with the program?s emergence onto the national scene. Rice left early for the NFL after finishing the most dominant - and important - career in Rutgers history.

Tom Mulhern (@TomMulhernWSJ), Wisconsin State Journal: Joe Thomas (2003-2006) – I was going to say this was a pretty easy call. Hard to argue with Ron Dayne, the NCAA?s all-time rushing record holder. But the more I thought about it, the harder the question became. At a school known for producing outstanding offensive linemen, left tackle Joe Thomas was the best I saw at Wisconsin in the BCS era. He was a dominant run blocker and pass blocker, which set him apart from some of the other great linemen at the school. He was also good enough to play defense in a bowl game - tearing an ACL in the process. He could have played several positions. Thomas didn?t have Dayne?s statistics, but Thomas was the best player I saw in the BCS era.