How would B1G hoops teams have looked with these guys? 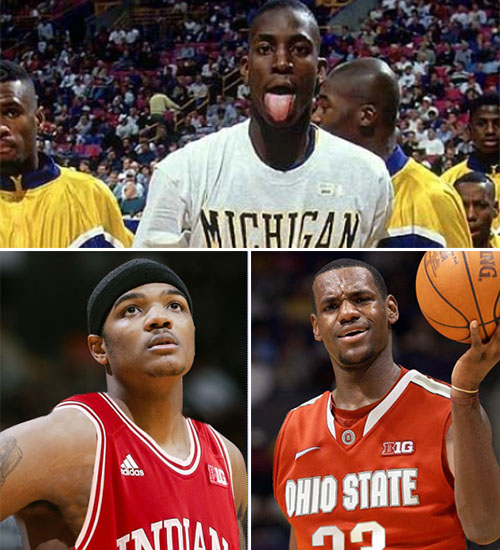 Lostlettermen.com recently put together an entertaining photo gallery, which took a look at where some of the best preps-to-pros stars would have played in college if they had to go to school for one year before entering the NBA Draft. Three of the players featured in the gallery were pegged to attend Big Ten schools: LeBron James (Ohio State), Kevin Garnett (Michigan) and Josh Smith (Indiana).

Whether these three NBA vets would have attended the predicted schools is anyone's guess, but it's still fun to consider. In fact, let's go ahead and take this one step further.

Here is a detailed look at what those rosters would have looked like if those superstars did indeed play in the Big Ten.

What if Josh Smith went to Indiana…

How this team would have fared: The 2004-05 Hoosiers finished the season with a final record of 15-14, including a 10-6 mark in Big Ten play. A loss in the opening round of the Big Ten Tournament to Minnesota ended Indiana's NCAA Tournament hopes. Instead, Mike Davis' team accepted an invitation to the NIT, where it lost in the opening round to Vanderbilt. With Smith in the mix, this would have been a very dangerous team. The Hoosiers would have featured a dominant 1-2 punch down low with Smith and White, in addition to lead guard Bracey Wright, who led the team in scoring with an 18.3 ppg average.

There were two Big Ten teams in the Final Four that season (Illinois and Michigan State), but North Carolina defeated a talented Illini team, led by Deron Williams and Dee Brown, in the national title game.

With Smith in the mix, this Indiana team could have made a deep run in the tournament, as well, but I don't think they had the experience and leadership to top a team as good as that 2004-05 Illinois team.

What if LeBron James went to Ohio State…

How this team would have fared: This was a young Buckeyes team that struggled throughout the 2003-04 season, finishing the year with a final record of 14-16. Jim O'Brien's team managed just six wins in Big Ten play and finished ninth in the conference standings. However, if you were to add LeBron James into the mix, everything changes, in a big way.

Think of it this way — James averaged 20.9 points, 5.5 rebounds, and 5.9 assists per game in his rookie season with the Cleveland Cavilers. The team won 18 more games with James that season than it did the year before. Now, put this guy in the mix against college competition, and you probably have the most dominant player in college basketball history. In addition to James, this team would also feature two double-digit scoring guards in Stockman and Sullinger, a talented 7-0 center in Radinovic, and a future Big Ten Player of the Year in Dials.

A UConn team led by Ben Gordon and Emeka Okafor won the national championship in 2004. As talented and skilled as that team was, I just don't see a way this Ohio State could be stopped with LeBron James leading the way. Yes, he is that good.

What if Kevin Garnett went to Michigan…

How this team would have fared: This lineup is loaded with talent, from top-to-bottom. Bullock, Taylor and Traylor all went on to be NBA Draft picks, while Fife was the captain of this team and the engine that made the Wolverines go. Now, add Garnett to the mix, and this team has the potential to be great.

This team finished fifth in the Big Ten standings and fell in the opening round of the NCAA Tournament. It turned out that the team had to vacate its wins that season due to NCAA rules violations between the program and booster, Ed Martin.