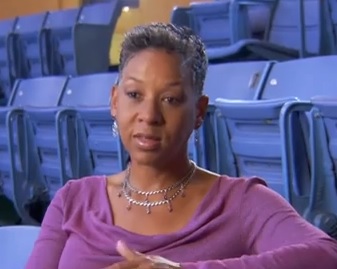 For tennis fans we?ve entered the sweet spot of Grand Slam season. The French Open just ended and the eyes of the sport are focused on Wimbledon and the US Open will be upon us in no time. The summer also marks a major spike in tennis participation so we thought it was appropriate to reconnect with Katrina Adams, a prominent voice on the world stage of the sport.

Katrina is a television analyst for The Tennis Channel and a contributor to Tennis Magazine, after enjoying a very successful career that spanned 12 years. Earlier this month the two-time All-American Northwestern Wildcat was inducted in to the ITA College Hall of Fame. She also currently serves as the United States Tennis Association?s First Vice-President and is a board of director for several major tennis organizations.

However, Katrina?s true passion is still on the front lines of tennis where she uses the sport to transform lives as Executive Director of the Harlem Junior Tennis & Education Program in New York City. It?s the gold standard of youth tennis programs and BTN LiveBIG captured its impact in this video profile:

Q: You were one of the original profilees for LiveBIG and we?re excited to reconnect with you as summer takes full swing with the onset of summer. Fill us in on how things are going at Harlem Junior Tennis & Education program.

Katrina: It?s going great! We?re still serving over 1,000 kids and have great partnerships in place with many schools in Harlem, New York. Our kids continue to graduate at north of 90% and are going to college. I will tell you that 10-and-under tennis has had a pretty big impact on our young kids.

Q: Could you explain 10-and-under tennis?

Katrina: Of course! About five years ago the United States Tennis Association (USTA) implemented a new set of rules and equipment to make tennis more enjoyable for young kids. The traditional size court is cut in half, they use a smaller racket and lower compression tennis balls so it doesn?t bounce over their heads. In the past a ball would bounce and they?d stare at it, now it is more manageable for them to track it down. The bottom-line is that it makes tennis more fun and gets young kids engaged in a way they can learn the fundamentals and grow in to the regulation court. It is impacting our talent level in the program substantially. This past year we had 60 kids win tournaments from our various age groups.

Q: Wow. That sounds impressive. Tell us more about the individual stories that are resonating with you. You have firsthand experiences with so many kids, tell us about the ones that stick with you to the point that you know tennis as part of the educational offering you deliver is working.

Katrina: I look at the kids in our program on a daily basis and I see so many different stories. I see kids from solid family backgrounds who have opportunities. I also see kids from single parent homes with not so good economic situations and they?re scraping to just get by. When you see those kids come in and want to be better both in the classroom and in tennis it moves you. It inspires you.

We provide educational support, life skills training and the ability for the older kids in our program to mentor the younger ones. We get them to see the potential life they could lead by learning from the values the sport teaches you. You can always tell the ones that will be excellent because they ask ?what can I do to get better?? Sometimes it is because they?re super smart and sometimes the motivation can simply be because they don?t want to go home.

We also have kids that come from great family backgrounds and they reach out and create friendships and bonding. One of our kids we called ?white chocolate? because he was so completely engaged with anyone regardless of race or their socioeconomic backgrounds and just has a way of connecting with everyone. The program is an eye-opener for him. After becoming friends with so many kids, spending time with them in their various neighborhoods he?s told me ?I get it?. It has changed his life. So, it?s a two-way street in terms of how players from different backgrounds get value out of the program.

Q: Tell us about your network and how the community of Big Ten members comes in to play in your life.

Katrina: Obviously I?m proud to be a Northwestern Wildcat and whenever you meet with a fellow NU person you?re high fiving whenever you can. When I find myself at major sporting events and there are Big Ten schools represented, I?ve got friends from those schools so I am supportive of them. I?ve got a good friend who is a Badger and I ?badger? him whenever I can. It?s fun in those moments, but there is a common bond that we share amongst ourselves. We poke fun at one another as rivals, but we also share a unique network.

Q: As the First Vice-President of the USTA, you also serve on the board of USTA Serves. Tell us about your involvement in the foundation.

Katrina: I?m biased because I am a recipient of funding (at Harlem Junior Tennis) but I see first-hand on a daily basis the impact of their investment in the program. Because of the funding, we?ve grown programs and been able to elevate the impact. I?m so passionate b/c it is part of my life. I do it every day and using the sport of tennis has been the opportunity I?ve seen to actually help mold better people - through increased self-esteem, self-confidence and the opportunity to compete in life. They?re motivated to go in to education and professional life.

Q: Your program is part of the USTA Serves national initiative so I?m curious whether or not you help one another out.

Katrina: The first thing I did when I became the executive director here was to reach out to my peers to find out ?what are you doing that makes it so successful?? I?ve learned a lot from collaboration. I sat down with our biggest ?rival? in NYC to learn how it all worked and he was great. Ultimately, we have the same goal - it?s not so competitive that we?re not going to share best practices. I?ve found people are willing to share their success stories and also guide you on valuable lessons they?ve learned because we?re connected.

Q: Your story and career journey has been pointed to as an inspiration to a generation of tennis players. I understand you?re actually a product of a USTA Serves (NJTL) program that provided you with the very characteristics you now offer in Harlem. Who are the rising stars in tennis whose stories inspire you?

Katrina Adams: Taylor Townsend is one that instantly comes to mind. She?s from Chicago and I met her when she was very young. Taylor comes from the Englewood section of Chicago, one of the more challenging places to grow up and she became number one in junior tennis.

Here she is making the 3rd round of the French Open and gets a wildcard in to Wimbledon. It?s incredible. I think she?s been embraced by the world. She?s smart, she has a great smile and doesn?t possess your typical tennis body yet has risen above it all and is an inspiration. It?s not about everyone else, it?s about her and I love that about Taylor.

I constantly send her encouraging texts. I?m not telling her what to do but just try to tell her that I?m a supporter. I think she appreciates it.

Donald Young is someone who I relate to as well because I played with his father. I?ve also admired the rise of Sloane Stephens and with the three of them there is a commonality and it?s that we?re all African-American. I think there is a respect factor since they know that I?ve come before them and that I also respect them as I can relate to their journey.

When I came on the Tour, Zina Garrison took me under her wing. We had the same coach, we played together, we traveled together and it had a big impact on me as I learned from her and her influence on me inspired me to do the same to those that have come after me.

LiveBIG: Katrina, thanks for sharing your story with us and we look forward to continuing the dialogue as you continue to make a positive impact through tennis!