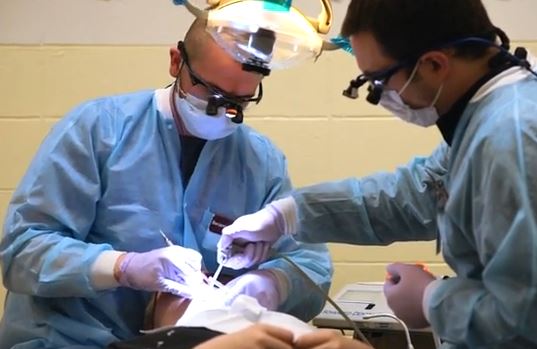 In the spring of 2012, Iowa provost P. Barry Butler announced a strategic plan under the pillar, ?Better Futures for Iowans.? The initiative invited proposals for how to delegate funding for the project. Faculty and staff submitted 28 applications, of which 13 were selected.

One of the selected applications came from the University of Iowa College of Dentistry & Dental Clinics and Dan Caplan, Head of the Department of Preventative & Community Dentistry in school. Dean David Johnsen told Caplan he wanted the College of Dentistry to submit at least one application for consideration. When the idea, Project SEALED (Service, Engagement and LifeCareer Education), came to fruition, Caplan took the lead.

The frequency of dental care in rural Iowa is not up to bar with the more urban and suburban areas of the state. Project SEALED brings an oral care service, while the children also get to learn from up-and-coming dental individuals at Iowa.

?I was contacted by the Allamakee County Board of Health. They said their county has a lot of kids that don?t have access to health care,? Caplan says. ?I thought about it for awhile. We didn?t really know anything that came to the top of our head, then we heard about this funding from the provost for projects.?

From an educational side, Project SEALED adds a new dimension to the UI School of Dentistry. Students can both go out into the field and feel like they are a necessary form of health care and education to children.

Project SEALED?s origin called for a two-year plan. The pilot year consisted of students making trips to Allamakee in December 2012 and May 2013. Each trip featured ten volunteers at one location over a class break period.

The success of the first test case led to an increased presence in 2013-2014. Participating in Project SEALED became mandatory for third-year dental students. With about 80 students in each class, the students? participation was spread over four trips (about 20 students per trip) in October, December, March and May. The students were accompanied by faculty and staff members. Portable equipment was used to set up clinics in two schools.

Project SEALED has changed the dynamic of dental care in the region. According to Dan Caplan, who said he received verbal support for the program from a local dentist, Project SEALED has accounted for 693 visits from 564 individual patients.

?If there has been any concern, it hasn?t been expressed to me,? he says. ?Really there?s no different there than there is at the dental school. The dental students who are up there are all observed by faculty.?

During trips, UI students practically go back to their precollege days. Interactions go beyond the dentist?s chair and classroom. The two partners mingle even during their breaks.

?What?s kind of neat is our lunches are all in the school, so the dental students are interacting with the children,? Caplan says. ?We wear scrubs so they recognize we?re different than them.  We eat the same food as them. We walk through the line and get a tray and milk like them. And some of the kids are interested, so they talk to us about what we do.?

Caplan appreciates the acceptance the schools have provided for him and his students. The school district has opened its classrooms to him and helped provide equipment and storage space. The mutual relationship is budding.

For the students, the experience also serves as a form of cultural education.

Regardless of where the students come home, Project SEALED serves as a bridge between the big university and the small towns of the state of Iowa. Caplan says the programs plan to direct a third year similar to the second year. Third-year dental students will again take part in the program, bringing the same types of services, which include exams, oral hygiene education, cleanings, dental sealants and fluoride varnish applications. If funds suffice, radiographs (X-rays) may be added to Project SEALED.